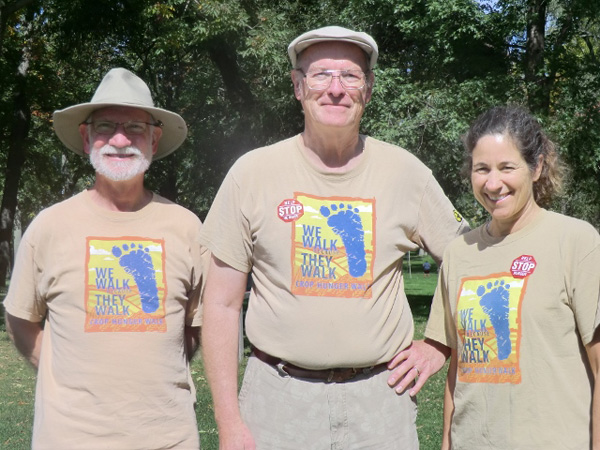 •Taken from the Oct. 3 Island Dispatch

At one o'clock in the afternoon, approximately 40 persons gathered at a picnic shelter near the park's nature center. Outgoing CROP Walk Chairman Paul Robinson stood on a table and informed the assembled walkers that Catherine Rieley-Goddard, co-pastor of Riverside-Salem United Church of Christ/Disciples of Christ, will take over as chair of the walk. He said Riverside-Salem UCC/DC has had a long history with the Island's CROP Walk, pointing out Carol Alt, a Riverside-Salem church member, had organized the first CROP Walk in 1987.

The walkers then assembled behind a paper banner that had been designed for the 2014 CROP Walk. As soon as the signal was given, the group rushed the banner, breaking it into pieces. They began walking on Beaver Island's short boardwalk, past a beach volleyball game, past River Lea, and down the trails. It was a good day to explore the Niagara River and to see the leaves just starting to change colors.

A married couple from Niagara Falls said they were enjoying their time in Beaver Island State Park. Dave and Diane, both 58, who attend Trinity United Methodist Church, said this was their fifth CROP Walk in Grand Island.

"We do it every year," Diane explained. She added that she has done CROP Walks in other locations for approximately 20 years. She said that her children, Ricky and Dana, were very small when she started doing CROP Walks. "I took the wagon with treats for the kids and drink boxes."

Alt walked a short distance and, then, she returned to the picnic shelter to cook hot dogs.

In addition to the hot dogs, walkers could enjoy apples donated by Susie's Vegetable Stand, and bottled water. Paul Robinson had informed the walkers that, after they finished their water, the bottles would be collected and taken to Bottle Junction in the Grand Island Plaza. "There is a CROP account" at Bottle Junction, Robinson pointed out, adding that, by bringing bottles to Bottle Junction and mentioning the CROP account, people could donate to the CROP Walk year-round.

After the walk, Alt described how she came to bring the CROP Walk to Grand Island. She said that, in 1987, she had just graduated from SUNY Buffalo State College with a degree in dietetics. She was hired by Food for All, connected with the Western New York Council of Churches, to work on hunger issues. One of her work responsibilities was to be in charge of the CROP Walks for all of Western New York. At that time, all of the area's approximately 20 CROP Walks were done on the same day, either late in September or early in October.

But Grand Island was not one of the communities to host a CROP Walk. Alt said she then decided she would start a CROP Walk in Grand Island, and she offered a presentation for the Grand Island Ministerium. "Almost every (Island) church supported us and was involved in the first CROP Walk."

"They opened their house and bathroom for us. We had cider, and stores gave donations." Along the route, Alt said, "people had set up tables and put out water for us. It was very sweet."

Alt said the first CROP Walk was a fun time. She mentioned that her daughters Tammy and Sarah, who walked in the 2014 CROP Walk, reminded her they had walked in the 1987 walk and they pulled a wagon with a puppy sitting in it.

Returning to this year, Alt said, "It was very nice and the town and business owners support it."

The CROP Walks also result in a good amount of fundraising. Twenty-five percent of the funds raised stay in the Grand Island community to help support the efforts of the Neighbors Foundation and the Trinity United Methodist Church pantry in providing emergency food assistance to Island residents. The rest of the funds go to Church World Service to assist in its international efforts to combat hunger. Rieley-Goddard said Grand Island walkers raised $3,285, which does not include money that had been pledged but not yet collected and online donations. 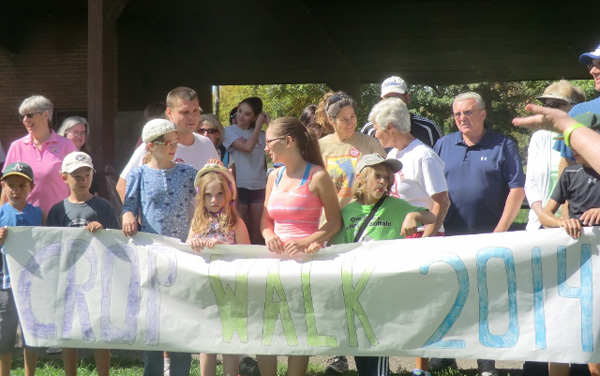 People gather behind the ribbon, ready to run through it and begin walking.