Season seven of NBC's "The Voice" started to ramp up in week two with solid performances from a trio of singers who could win the competition.

Katriz Trinidad, 15, of San Diego (via the Philippines), already has won multiple singing competitions. Her performance of "At Last" impressed the panel of judges, resulting in three "I Want You" chair turns.

"Congratulations," said Adam Levine, the only coach who didn't turn his chair. "They are going to lose their minds."

"I never thought that I would find something that I usually look for from my own label," Pharrell said. "I've been dreaming for an artist like you all my career."

"Just remember these words," Pharrell added, "I want you on my team (goes down on his knees) so bad. And I've never done this. I'm on my knees."

"Man, you know what? All of us in the back of our minds keep the hope alive that somehow we'll find someone who is just born to be a star," coach Blake Shelton said.

"Katriz, I think you could be that person. I really do. I mean, you're so different. You truly are.

"And let me take a second, here, just to say I've had a lot of luck with teenagers. And I've won this show several times before. You deserve to win this thing. You truly do."

"I feel like you're almost, like, a perfect singer," coach Gwen Stefani said. "You started off so soft and controlled, and then you just ramped and ramped and ramped till the end, where you hit a note that was so beautiful it was just mind-blowing. And then to find out it's coming out of a 15-year-old voice - it's hard to really take it all in."

"Katriz is special," Pharrell said afterward. "She's something that we scour the Internet for at my label. I turned around because I heard a lot of control. And then when you find out that's 15, it's like, 'What!?!'

"I thank this show for introducing me to her. The fact that I got to have her on my team - today's a great day."

Katriz said her previous contest participation prepared her for "The Voice's" spotlight.

"I mean, I guess just the experience of grabbing the opportunities that I can to just compete with others and learn more about myself as an artist is what really helps me to push through - through the song 'At Last,' because before ... I was really nervous. The nervousness just really rushed into me, and that's why I took a really big breath before I sang 'At Last,' " Katriz told BTS.

"I have private lessons, but my teacher became a teacher at school, so he's been busy, so I've been kind of just working on my own," she added. "But I do have mentors that help me when I need it." 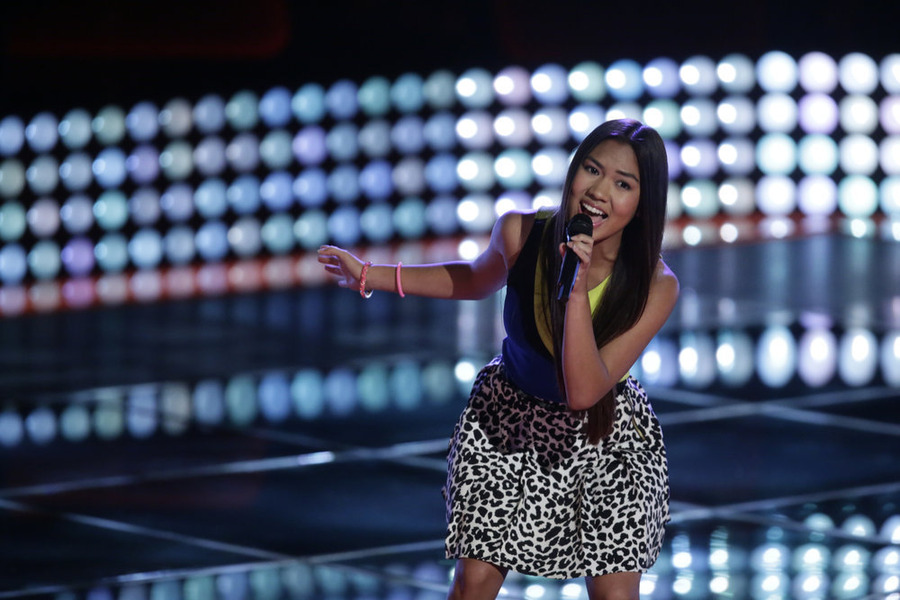 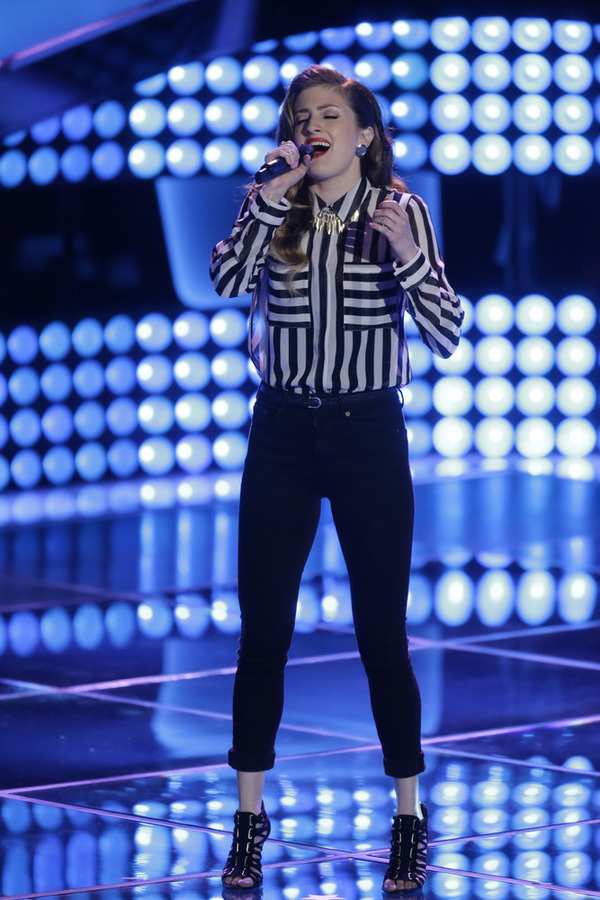 Jean Kelley, 29, of Atlanta, grew up listening to blue grass and '50s and '60s pop music. She drew chair turns from Blake and Gwen following her rendition of Kelly Clarkson's "Already Gone."

"I love your voice," Blake said. "I was on the fence about what you were capable of until you got to the end, and, man, when you hit that note, and held it that long, that let Gwen and I both know this is a for-real singer back here."

"I feel like in your tone I could hear similarities in our voices, which was familiar and comforting for me," Gwen said. "I pressed my button because, at the end, when you had all that range - a range that I don't have - I was, like, 'Wow.'

"And you're gorgeous. You have your own vibe, style. We almost have the same hairdo."

Jean told Gwen, "Your music spoke to me growing up. So, in a way, you coached me from a young age."

"Jean Kelley: I think she has a cool voice, and she has a lot of confidence," Gwen said afterward. "She definitely has her own lane, and I can relate to that."

Blake noted, "If she can capitalize on what she did at the end of that song, and make her entire performances like that, she's going to be somebody to contend with."

"She's got some sass in her," Pharrell told Gwen. "If she listens to you, she could be a strong contender."

"I was totally psyched about those two chairs," Jean told BTS. "I liked the performance. I was a lot more nervous than I was expecting to be, but I overcame it the best I could. I just wasn't seeing chairs turning until the end, so, of course, that kind of gets inside your head. But I was very excited when Gwen and Blake both turned their chairs."

As the competition (and her career) continues, Jean said fans will see "Hopefully great things. I'm definitely going to work really hard and keep pushing myself, probably start taking vocal lessons, because it's probably about time for that, and just do my best and try to make myself and my family and friends proud." 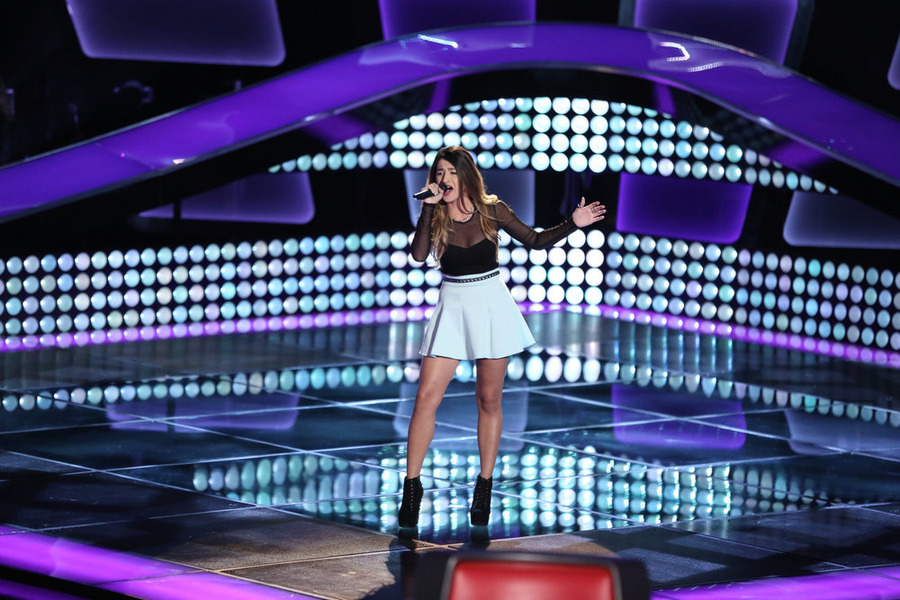 Mia Pfirrman was featured in promos promoting "The Voice" - much like Christina Grimmie in season six. So, we knew the 19-year-old California girl would make it past the blind auditions - we just didn't know how many coaches she would persuade to hit the red button.

Surprisingly, midway through Mia's rendition of Katy Perry's "Unconditionally," no chairs were turned. But as the song wound down, all four coaches buzzed in seeking Mia's services.

"Just so you know what was going on back here, I was looking at Adam the whole time going, 'Oh my god, that was really good, right? When are we going to start hitting our damn buttons here?' You know?" Blake said. "I think the one thing, maybe there wasn't as much finesse, but the fact that you were able to do a live performance of that kind of a song is incredible.

"And the fact that I just said all that means I probably should be your coach. Because we had a little moment right there. You gotta' admit it. I mean it was there. Everybody saw it."

"You know, what's really interesting is the moments that were really spectacular were, like, really spectacular. I'm talking about world-class spectacular," Adam said. "But, I'm going to be as brutally honest with you as possible. Even though it does need work, it's so good that I don't think it would've been fair for you to have gone home.

"It needs refinement, though. It does need refinement."

"I feel like I can't wait to try a different song on you, and see who you really are, and who you want to become," Gwen said. "When I was your age, I was still trying to find myself. And I could help you with that. I was you, basically, back then."

"You took a lot of chances, vocally," Pharrell said. "You were really pushing it with a lot of those notes. At a certain time, I just had to be, like, 'OK, I've got to turn around. I gotta' see who this is.'

"You sang like this was your one and only moment."

"He hit the nail right on the head," Adam said. "When we see that quality in somebody coming out here like it was their last time, we know that that's how determined they are to make it.

"That was so good," Adam said afterward.

"Yo; your voice is crazy good," Pharrell said.

"I really, honestly, thought I was going to go with Pharrell," Mia said. "But Adam totally spoke to me, and he was really persistent."

Several of "The Voice's" top alums have been featured in show promos. Mia said she was excited to find herself in that company.

"It was really crazy seeing myself in some of the promos," she told BTS. "And I was really excited that, just, like, I don't know. I've been like waiting for this moment for so long. I've been working really hard, and I just felt like I don't know it was the right time for all of this to happen to me now. And I feel like my audition and the whole segment went really well.

"I was not expecting - I mean, it's hard to expect anything before you see it. It just, like, felt like a dream. And I don't really know. It's just weird. I'm really excited about it, though, and I'm happy that they - I don't know. I'm happy they didn't make me look dumb, because I remember saying a lot of dumb things out of nervousness, and it was great."

Mia told "The Voice" audience her parents were in an '80s dance band called September. But, she cautioned BTS that doesn't mean she has a leg up on the competition.

"You know, coming from a musical family, it's just, you know, I've always been expected to know so much and to, I don't know, just be as good as everybody else ... in my family since I'm the youngest," she said. "And I don't know. I'm happy that I get to be on a show like this to teach me what, I guess, what they never could or what they didn't have the chance of teaching me.

"And I guess it's kind of like even more than I could possibly ask for being a young singer. I just, I already feel like I have so much. I've already learned so much, but I know I still have so much to learn, and I just really feel like it's good to be on Adam's team, and I feel like he can really help me with the things that I don't know yet, being the artist that I want to be, or (being) just cool."