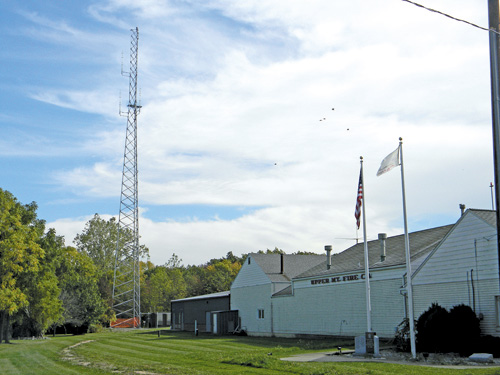 The 219-foot tower behind Upper Mountain Fire Co. is a source of controversy.

So summarized Greg Sitek of the Upper Mountain Fire Co. to the continuing problem of a stop work order now impacting completion of a recently constructed 219-foot radio tower behind the Upper Mountain firehall on Moyer Road - one that's intended to improve and enhance communications abilities for area first responders.

Monday evening, a large contingent of members from area fire companies brought their trucks to Lewiston Town Hall in a show of frustration to Supervisor Dennis Brochey and Town Board members over a stop work order issued by the town on the tower. That action came in response from residents' earlier concerns over the tower's height, its placement relative to area homes and Upper Mountain Road, a number of safety issues, and also the continuing question on how the tower went up in the first place.

Intended to meet federal requirements for increased bandwidth capability to first responders serving not only Lewiston but also Niagara County, the tower went up in expeditious fashion by the county one weekend over the summer. But it also went up apparently without conforming to a host of town zoning and building procedures, let alone the awareness or approval of the town's Tower Committee or Brochey and board members.

As a result, the project's completion has been put on hold indefinitely by means of the stop work order, with the town now considering litigation.

"We understand the importance of this; we are trying to figure out a way to make both sides happy here," Brochey said.

But that response failed to stem the frustrations of first responders, who voiced their concerns on the need for effective communications and the problem of addressing dead zones in the area, which the new tower was intended to resolve. The tower was scheduled for final testing en route to actually becoming operational to first responders. But all that remains at a standstill.

"Not good," said Lewiston No. 1 Volunteer Fire Chief John Penzotti, on the impact on responders from the stop work order. Penzotti, one of several on hand that night, complained to the town on the long-standing problem of poor communication capability affecting first responders, particularly in Lewiston, and how the new tower is a vital component. He and others said they represent the interests of 234 area firefighters and four fire companies serving the town; all spoke in support for the tower

This "is a county-wide project, not just Lewiston," said Upper Mountain Chief Dan Levin, adding the town's threat of litigation will only present added hardships to first responders as they strive to do their jobs. "This is not what we need," he said, telling Brochey and the board that effective communication is vital, and noted the major paper fire last weekend at the Norampac plant in Niagara Falls and the recent threat of a student evacuation at Niagara University as cases in point. "We need a swift resolution on this," Levin said.

That, however, does not appear likely, at least in the short term. Brochey and the board members reiterated the strong possibility of litigation, adding that the town feels it was railroaded in the whole non-communication process with the feds and county that led to the tower being built. "We're all losers here," Brochey said.

"The problem here is that none of us were involved in the process," said Town Board member Al Bax, who continued to express his leeriness on the whole situation.

"I have no idea on where this is going. This is a very difficult scenario. There's no easy resolution to address this," he said.

And the work stoppage on the tower's completion continues.

•Finance Director Paul Kloosterman presented a plan for the town to switch to a quarterly billing system for water accounts - similar to one in use in the village - versus the town's current bimonthly billing. "The town could save money here," he said, noting such savings in postage and also in personnel, by having less frequent readings done and allowing water department staffers who do the work to address other needs.

On a resolution from Bax and Councilman Ron Winkley, the matter was approved for the quarterly billing change, which is expected to take effect in January 2015.

•Kloosterman also updated the board on the town's developing 2015 budget. He said that meetings have been done with department heads and a tentative budget was expected to be filed with the town clerk by Sept. 30. Kloosterman requested and was approved to present the budget numbers in an open meeting with Brochey and board members at 1:30 p.m. Tuesday, Oct. 7, at Town Hall. That session is open to the public.

Soon after, the board also approved holding a public hearing on the budget at 5:30 p.m. Monday, Oct. 27, to review it further en route to adoption.

•On a related matter, the board tabled for now any discussion of the refuse tax idea raised by Kloosterman as Town Attorney Mark Davis was absent and unable to review the matter.

•One financial item also not addressed was the town's bill of roughly $4,500, submitted this past summer to Artpark and Company for the purchase of "no parking" signs posted on village streets by Lewiston Police during Artpark concerts. That bill was subsequently returned to the town by Artpark.

"Well, what we do now, send it back?" Bax asked. Following some discussion the board opted to table the matter.

•The board heard briefly from Kloosterman and attending town attorney Brian Seaman on a possible plan to better address the town's hydroelectric benefits received from the New York Power Authority - namely the more than $500,000 in annual payments of NYPA money to Lewiston that go toward capital improvements as per the earlier NYPA relicensing agreement with the federal government. Kloosterman said he needed guidance on a proposal allowing for Lewiston to be able to spend the money in other ways, namely to fund town operations.

Seaman replied that he felt a scenario was possible, where Lewiston would name itself as an alternate user with NYPA, and that could enable the town to do this. No further discussion came that night as the matter was referred to executive session.

•Board members opted against a suggestion by Brochey for open interviews of candidates to fill the seat vacancy created by the earlier resignation of board member Mike Marra. Winkley commented he felt that the interviews were inappropriate, given the time frame to the Nov. 3 general elections and also that board approval of an individual to fill the seat would present an unfair advantage to the declared candidates seeking election to the seat. No action was taken. 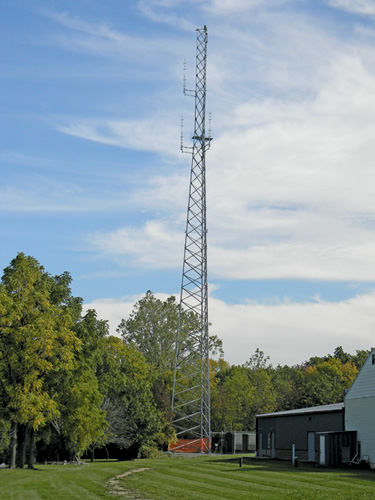