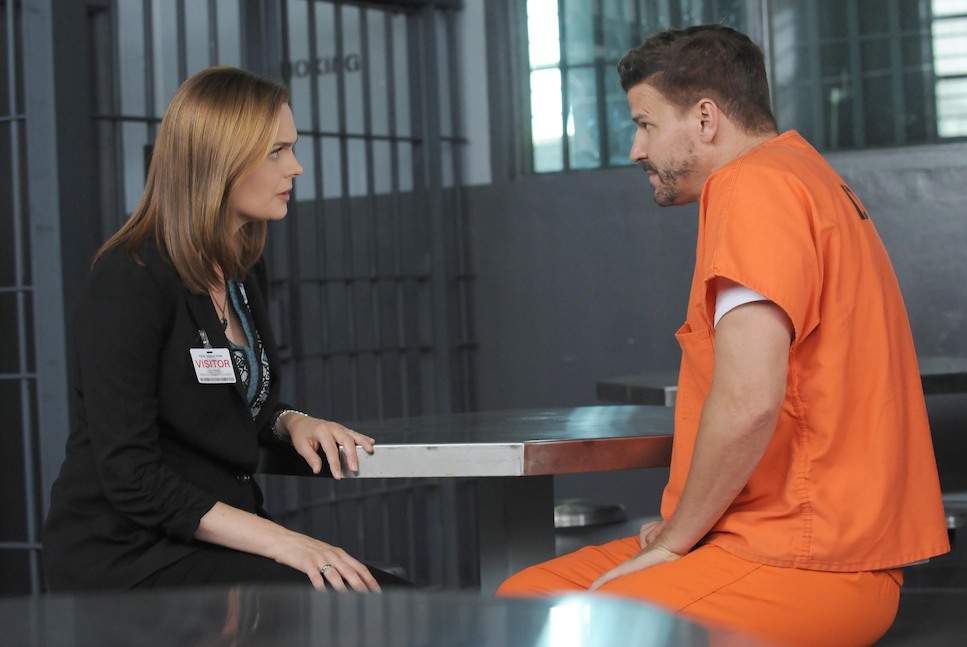 They had to postpone their wedding, thanks to serial killer Christopher Pelant - a longtime nemesis. He was on the loose and threatened to kill Brennan if she and Booth tied the knot. No sooner did they foil Pelant than they encountered "The Ghost Killer," a mistreated-turned-misguided woman whose father had covered up a slew of crimes - including her gruesome acts of murder - thanks to his bureau ties.

In the season finale, Brennan, Booth and "the squints" - Bones' Jeffersonian colleagues - were just about to expose a "Ghost Killer" government conspiracy when a hit squad took out their house and left a shot-up Booth for dead.

Brennan was able to get Booth to the hospital where, lo and behold, he was arrested. The gunmen who tried to off him? The FBI claimed the shooters were agents assigned to arrest Booth for classified actions he took while serving overseas with the military.

And you thought you had a rough year at work.

If the rollercoaster ride was difficult for Booth and Brennan, it was even more challenging for actors Boreanaz and Deschanel.

"Well, I know there is some light at the end of the tunnel, once we get through episode two and went into episode three (this season)," Boreanaz said. "It was, for me, it was long and arduous from even towards the end of last season, and to go into it this season again, (the challenge) was figuring out this whole conspiracy within the FBI and playing this arc that went on for some time. It's always difficult when you're in demand; challenging, when the storyline is of that nature. It's been fun; rewarding, as well as different.

"I think that we've really been able to examine the characters' relationships within when they're at home and when they're dealing with the conspiracy, how it ended last season. Things have changed dramatically, and I think that this season we will see that the reward for all of it is going through this fire that they went through in their relationship, and how it affects them, and how it changes things and also opens up new doors."

Deschanel's experience, she said, was "very similar to David, except for the fact that, last season, we ended the season with the season finale. David directed that episode and that was incredibly intense. The shootout scene took three days to shoot. We shoot five scenes in a day on the show. It's not like we take multiple days to shoot one scene. It's been really intense - that means long hours. That means intense emotions. It takes its toll on you, emotionally and physically.

"We've come back in a similar space for these characters. I can't say there were happy times to be shooting these episodes. They're intense, but in a way, nice to jump into some strong emotions. There's some really big conflicts that Booth and Brennan have in these first couple episodes that you don't really see very often. It's nice to do something different in that way, but it is demanding and a bit exhausting. But I think that there's new dynamics in this show, taking new, different directions, and you'll see as you see the first few episodes.

"This season, we're not just resting on our laurels here. We are taking this to a new level. We always try and challenge ourselves as actors. The writers are always taking things to the next level and doing different things, and taking the show in a different place and changing the dynamics of the characters. It does keep it interesting."

When season 10 begins (Thursday, 8 p.m. on FOX), Booth is in prison, and Brennan and company are struggling to find a way to prove his innocence.

"Booth is in trouble," Deschanel said. "We're worried about him. We think he's not going to survive being in prison. We have different ideas about how we're going to get him out. Being in prison brings up a lot of stuff for Booth. ... He's suffering from PTSD because of being there, as well as being tortured, and what not, being in the military and the Army Rangers in his past. He's gone through a lot in his life.

"We're dealing with a lot when we come back this season. He's in prison. ... We're working to get him out. He's not safe, and all these people want to kill him there. It puts a real strain on the relationship even when he does get out of prison and it's a big deal. It's not just going to be healed in one episode or something. It has long-lasting repercussions."

Boreanaz said, "I think it'll last throughout the season. I don't think it will necessarily be as dark as some people might think it will be. I think the first two episodes really have the sense of how dark it could be, where (Booth is where he) is, and who he trusts inside of the FBI, how he decides to take things into his own hands, and how Bones deals with that and gets him back.

"There's a great moment in episode two that is a very strong moment between both of them and she really (takes) his case to a point where he has to decide what to do. I'm not going to really say what that is, but it is definitely - it's a page-turner for their relationship and (to) see how that unfolds."

As for the conspiracy, Boreanaz said, "there will be a sense of closure that will wrap things up in a very neat way."

"Bones" airs Thursday at 8 p.m. on FOX. Learn more about the show online at http://www.fox.com/bones/.