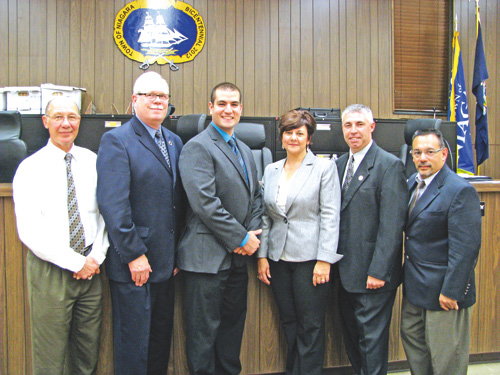 Town of Niagara resident Hagop Jake Otabachian, third from left, is congratulated by Deputy Supervisor Sylvia Virtuoso and the Town Board as a new full-time officer for the Town of Niagara Police Department.

The Town of Niagara on Tuesday beefed up its police staff and equipment, as well as aired a beef with the county on lack of support for the increased needs of the town's police department due to business development.

The board hired Town of Niagara resident Hagop Jake Otabachian as a full-time police officer for traffic safety patrols.

Otabachian, 25, has been a part-time officer in Town of Niagara since February. A Lewiston-Porter High School graduate, he completed Niagara County Law Enforcement Academy training in 2012. Funds for the position were in the current town budget.

Virtuoso said a request to Niagara County to provide extra sales tax funding to the town to help pay for the increasing demands for police and fire protection in the Military Road business corridor, including the expanding Fashion Outlets of Niagara, fell short. Despite the support of Niagara County 5th District Legislator Jason Zona, not only was the proposal rejected by the majority, it wasn't even put to committee for further study, she said.

"I am very disappointed in the County Legislature as well as the town supervisors who stood against me," Virtuoso said. "Nobody has any plans on helping us."

The county distributes sales tax money based on a municipality's population. While the Town of Niagara has to deal with a huge and still growing business area, its population is small and declining.

Fashion Outlets alone brings in $13 million to the county in sales tax revenues. So, while the Town of Niagara brings home the bacon in terms of sales tax revenues, towns with larger populations, such as Wheatfield and Lewiston, get the most money.

"The lack of cooperation from the county is deeply disturbing, to say the least," said Councilman Danny Sklarski, himself a former county legislator. "How much more can we push on our taxpayers?"

•Virtuoso will distribute the initial town budget for 2015 to the board at a special meeting at 4 p.m. Wednesday, Oct. 1.

•The town's attorney Michael Risman conducted a hearing on the possible repair or demolition of an abandoned property at 3039 St. Paul St. The property currently is handled by Oswen Loan Servicing out of Fort Washington, Pennsylvania.

•The board set a public hearing for 7 p.m. Oct. 21 in regards to local law No. 1 for 2014 on potable water. It involves the use of backflow preventers and check valves to protect the public water system.