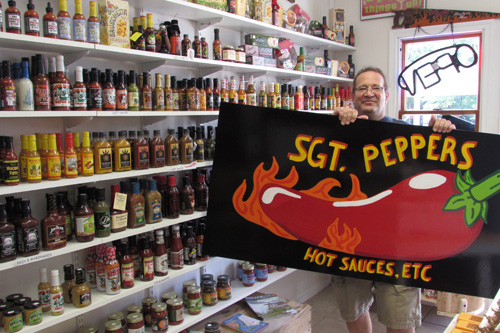 Neil Garfinkel stands inside of Sgt. Peppers Hot Sauces, Etc. Behind him is a wall of spiced goods.

May we introduce you to Sgt. Peppers Hot Sauces, Etc.?

Guaranteed to raise a smile

The plaza is home to Grandpaws Pet Emporium, a retailer with everything cat and dog lovers could want for Whiskers and Fido, including food, toys, supplements - even a pet-friendly café; Ever After Consignment Boutique, which pairs retro fashions with nostalgic chachkies you'll have to see to believe; and now a new specialty grocery store, Sgt. Peppers Hot Sauces, Etc., which boasts a wall of spiced goods, an assortment of cheeses, and a smidgen of the Beatles.

"I went into a little shop in Thousand Islands like 20 years ago, and it was about this size - 400 or 500 square feet," owner Neil Garfinkel said. "It was full of hot sauce - and people.

"I figured I'd add cheese to the mix."

Lewiston likes to remind guests it was a top finisher in the 2012 national Rand McNally/USA Today "Best of the Road" "Best for Food" category. It didn't win, in part, because champion Santa Fe, New Mexico, had more variety.

"I just thought Lewiston needs it," Garfinkel said of his spice shack. "It's a culinary town. It fits right in."

Now, while the store's size is somewhat modest, its bottle collection is rather intricate.

He said his hot sauces are unique. They range from super hot (upper shelves) to not so hot (lower shelves). Some have colorful names to match their colorful labels.

"Oh, you're not to going find them (at a supermarket)," Garfinkel said. "Maybe one or two. And those items I have at the same price or cheaper than the supermarket."

His store boasts "A lot of gift items, too, like cheese trays. Cheese and cold, cured beef. ... And some deli items from New York City," Garfinkel said. "I have all these artichokes and peppadews. Stuffed olives. Regular olives from Italy, Greece. Bacon-flavored ketchup. There's bacon hot sauce, too.

They love cheese, too. Sgt. Peppers opened Saturday (during the Lewiston Art Festival) and Garfinkel said, "The cheese was going really well over the weekend. People were gobbling it up."

He sells both Wisconsin cheese and deli cheese from New York City. Prices range from a few dollars to around $50, depending on the flavor, product and weight.

Additionally, Garfinkel offers, "A lot of barbecue sauces; spices. Not everything is spicy, either," he said. "There's a lot of sweet. You know, tequila; there's rum sauces."

Sgt. Peppers Hot Sauces, Etc., is open seven days a week (Sundays, from noon until 5 p.m.; Mondays, 11 a.m. until the weekly Hennepin Park blues concerts end; and 10 a.m. until 8 p.m. the rest of the week). The store is situated between the corner café and Ever After. 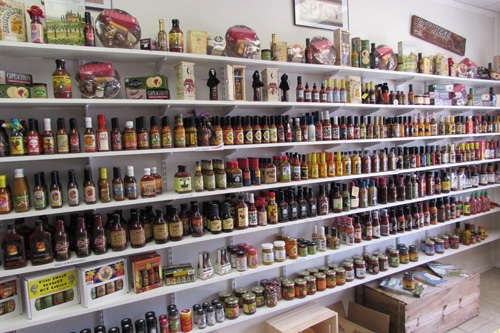 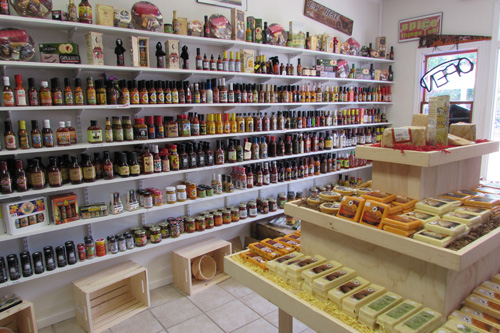