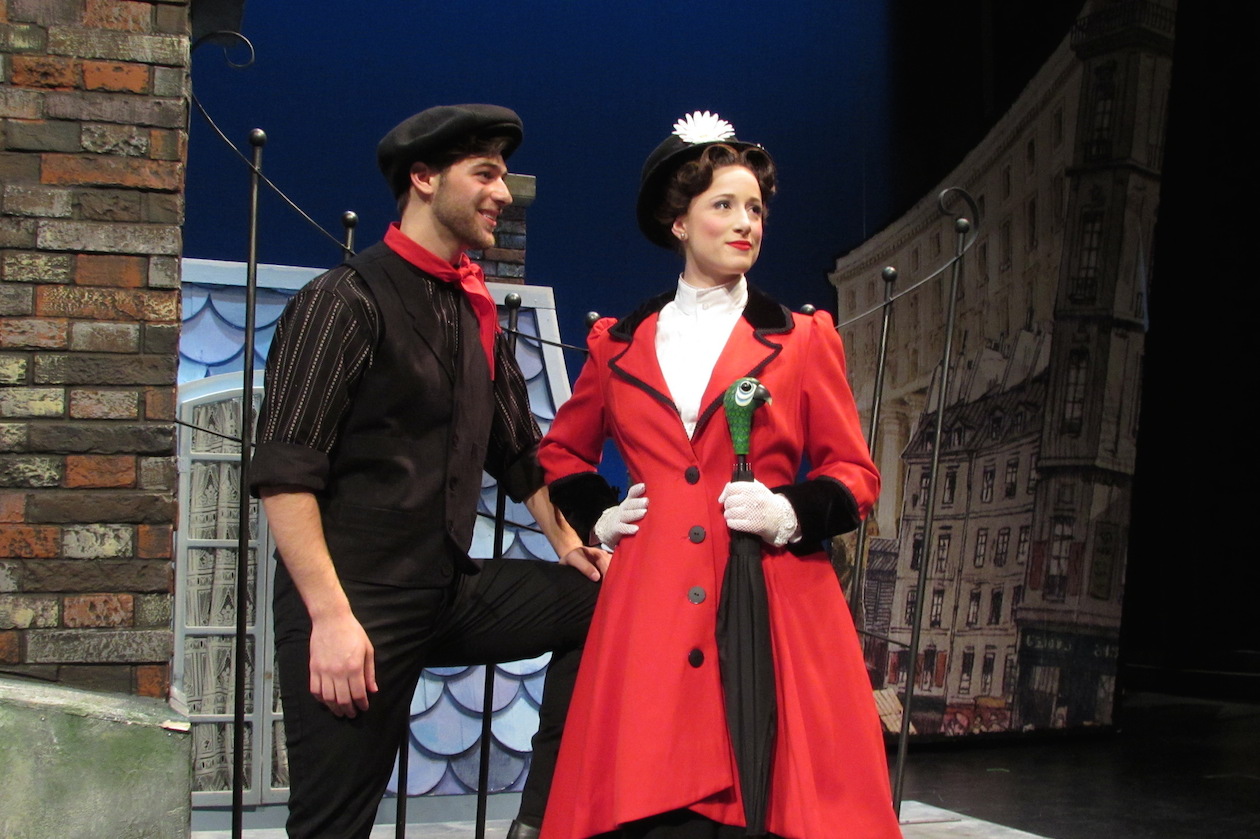 Pictured are John Barsoian as Bert and Emilie Renier as Mary Poppins.

Review and photo by Joshua Maloni

The late James Brown has been in the news lately, thanks to a biopic debuting in theaters this weekend. "The Godfather of Soul" was called "The hardest-working man in show business."

In his absence, that title belongs to the cast and crew behind Artpark & Company's production of "Mary Poppins." All day Thursday, they rehearsed, shared notes, put on elaborate costumes, moved set pieces, and dance, danced for not one, but two run-throughs of the nearly three-hour show. If that wasn't enough, they took time to mingle and snap photos well past midnight with fans, patrons and sponsors.

That burst of energy didn't go unnoticed. The revelry that spilled over into the courtyard began inside the Mainstage Theater, where more than 1,000 people watched the 8 p.m. opening night performance. Throughout the show, crowd members were heartily clapping, laughing and cheering for said cast and crew.

Mary Poppins, the character, brings color and magic to a dreary English home. The musical, likewise, brought sparkle and whimsy to an otherwise dull and damp day. It was a highlight of the week for many, and a reminder that Artpark & Company offers more than rock concerts.

As the story goes, George and Winifred Banks (Paschal Frisina III and Debbie Pappas) have lost that loving feeling, while their not-so-precious children, Jane and Michael (Jessica Riloff and Samuel Fesmire), have run amok - and run many nannies into early retirement. In their hour of need, Mary Poppins (Emilie Renier) appears - out of nowhere - and delivers a spoonful of ... tough love, insight, life lessons ... and, yes, sugar.

Mary and her bestie, Jack-of-all-trades Bert (John Barsoian), show the Banks family there's more to life than what they see with their eyes. Just as importantly, the dynamic duo rekindles the parents' love for their children - and vice versa.

It was a joy to watch the cast of actors share the spotlight (and try out various British accents).

Frisina is one of the few non-Elon University-connected cast members. The reliably on-point actor - a Niagara University grad - is a model of consistency. He has become the backbone of every Artpark cast since the venue opted to bring back the Broadway musical almost a decade ago.

Frisina's Mr. Banks was stodgy and yet lovable.

Pappas has shown great range in three Artpark performances. Theatergoers couldn't boo loud enough for her Wicked Stepmother in 2012's "Cinderella." This time around, they couldn't help but feel sympathy and hope for her Mrs. Banks.

Riloff and Fesmire burst onto the scene last summer as von Trapp children in "The Sound of Music." They've twice shown they can act, sing and dance with their more seasoned contemporaries. Plus, they have great comedic timing.

Well-known Buffalo actress Loraine O'Donnell's "Bird Woman" was odd, and reminded us a lot of the pigeon lady in "Home Alone." Her portrayal of nanny Miss Andrew, meanwhile, was outrageously good. O'Donnell's facial expressions, singing and Banks-menacing drew the biggest laughs. She was sinister and silly and completely over the top.

Here's hoping O'Donnell plays the villain at every Artpark show for the rest of time.

There's no eloquent way to say dude just brought it. He was the narrator, the lead dancer and Mary's sidekick. Barsoian had to sing, dance, act, sweep the occasional chimney and help the audience navigate the plot. He showed great poise in accomplishing each task.

We now know Barsoian is a capable lead actor.

What can be written about Renier that hasn't already been said? She is unquestionably the most popular actress Artpark & Company has employed. Renier has cast a spell over audiences who can't help but utter, "Emilie is amazing," after each performance. This writer can't walk five feet in or around the theater without someone coming up and complimenting the actress who, prior to "Mary Poppins," played Cinderella and Maria von Trapp.

There's a line in "Mary Poppins" where Mr. Banks says, "It's that Poppins woman. She is responsible for all of this!"

The same could be said for Renier: Her praise is the result of her hard work. Renier's talent is a "Star Wars"-sized tractor beam that draws audience members in at will.

Captivated theatergoers recognize Renier's talent and beauty. Her castmates applaud her warmth and giving nature, and say that's what makes her appealing.

Renier doesn't hog the spotlight, but that doesn't mean we don't want her to. She is a gifted actress, singer and dancer. One day when Renier is crushing Broadway, we will say we knew her when.

"Mary Poppins" is bound to be a family-favorite thanks, in large part, to the crew's creative vision. The dance numbers are big and bold and truly intricate. The set, props and flying scenes are wonderful, and really make this show look and feel magical.

CGI, eat your heart out.

Mary Poppins is "Practically Perfect." Artpark & Company's show bearing her name is, too. It's a bit too long, and there are some moments that might be weird for small children (think giant, angry toys). But the musical's life lessons and pure joy make it a must-see for all ages. 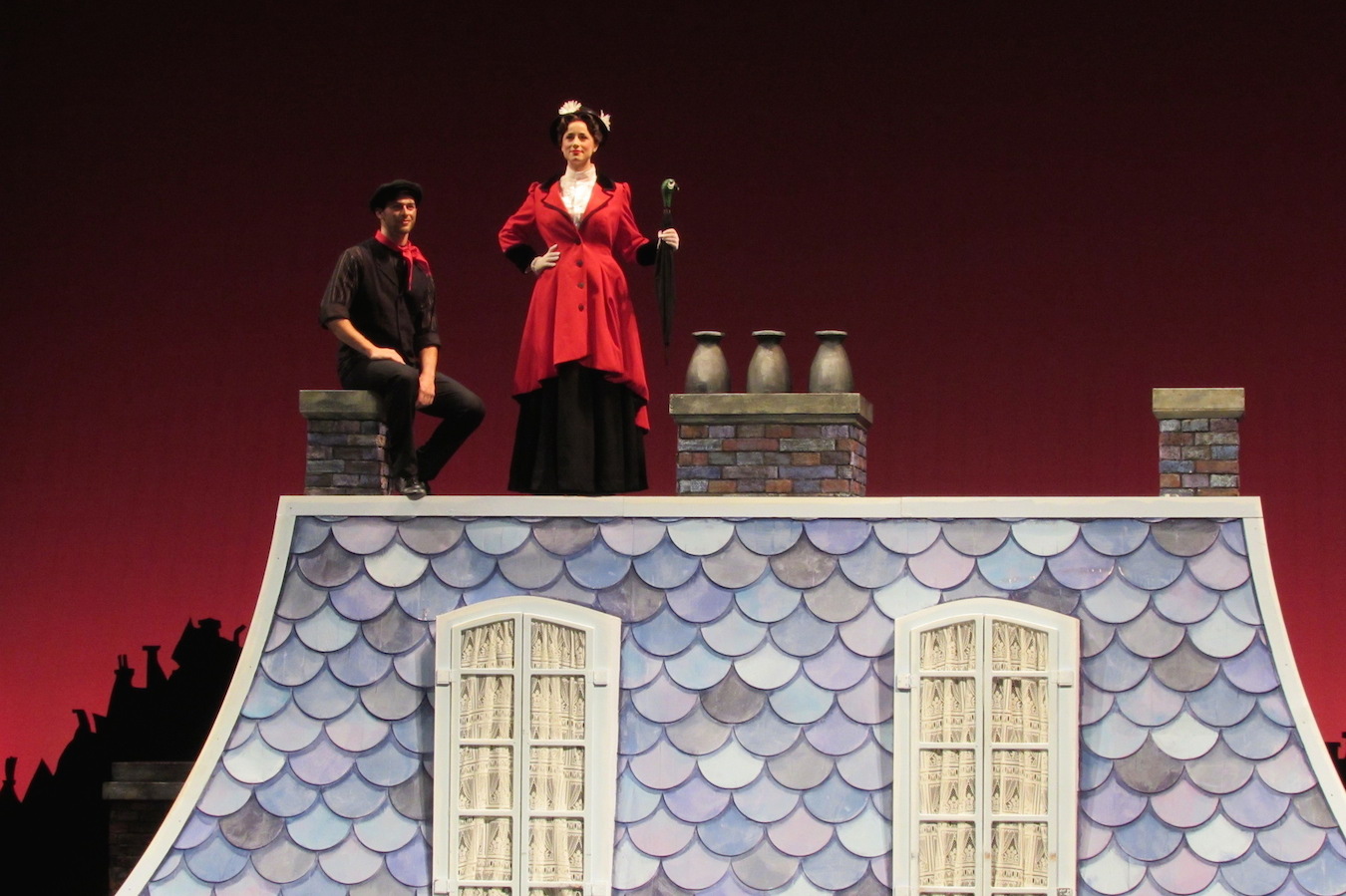 Pictured are John Barsoian as Bert and Emilie Renier as Mary Poppins.