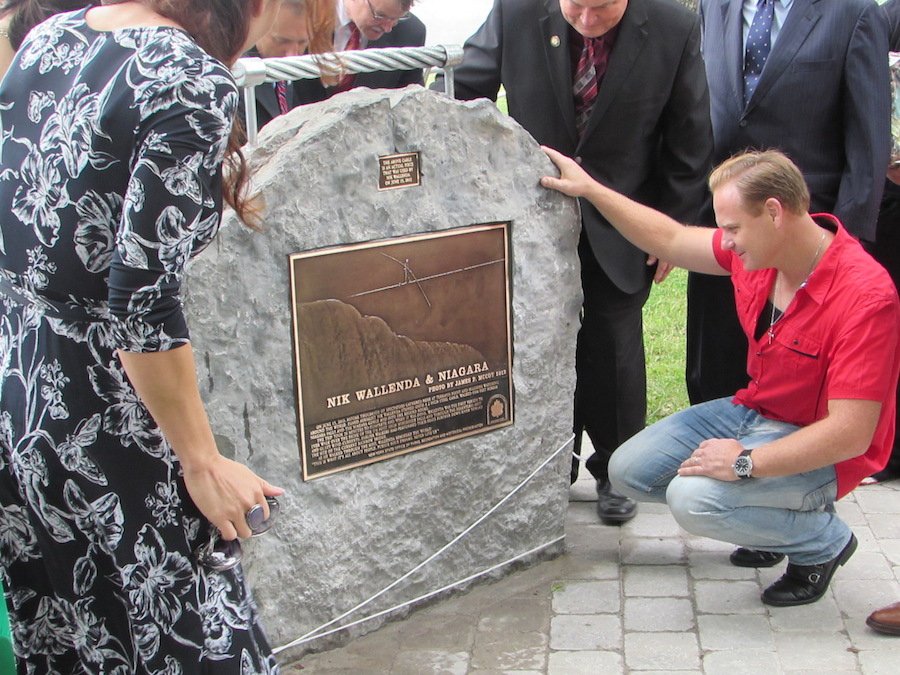 A plaque honoring Nik Wallenda, "King of the High Wire," was installed Monday in Niagara Falls, New York. The monument sits near the spot where Wallenda mounted his tightrope to cross the falls into Canada June 15, 2012.

A number of government officials, contractors, friends and family gathered on Goat Island in Niagara Falls State Park Monday to help Nik Wallenda unveil a new monument commemorating his June 15, 2012, high wire walk across Niagara Falls. The site of the monument is near the spot where Wallenda stepped off on his famous journey that captured the international media spotlight.

State Sen. George Maziarz emceed the event. He said, "This monument ensures that Nik's legacy will live on long after we are all gone. Nik's walk over the falls should be remembered by all generations as a feat of daring, skill and hope."

"Nik Wallenda's crossing of the Niagara Falls gorge was an awe-aspiring performance that was seen by millions of people from around the globe. It helped to put Niagara Falls back on the map as a pre-eminent tourist destination," said Assemblyman John Ceretto. "This monument is not only a testament to his courage and dedication to his craft, but it sends a message that, like Nik, we, too, are committed to achieving our goals of revitalizing our local tourist industry."

Mark W. Thomas, western district director for the New York State Office of Parks, Recreation, and Historic Preservation, said, "We are thrilled to have this tribute to Nik Wallenda's amazing feat as a permanent reminder of one of the most exciting days in the history of this park. We hope that the millions of visitors that see it will be captivated by what Nik did, and also take heart his mantra of 'Never Give Up.' "

Sam Hoyt, regional president of Empire State Development Corp., said, "Nik Wallenda is a history-making daredevil in the City of Niagara Falls who brought worldwide attention to our region. Gov. Cuomo and all of Western New York congratulate Nik on being honored with this monument that will be viewed by millions of tourists visiting the Niagara Falls State Park."

Niagara Falls Mayor Paul Dyster said, "Our community is excited to welcome Nik Wallenda and his family back to Niagara Falls. Nik's historic 2012 walk will live on in the hearts of our residents for many years. This monument is a fitting tribute to that memorable day."

The monument consists of a boulder from the Niagara River Gorge, to which is affixed a commemorative plaque, as well as a section of the actual wire Wallenda traversed during the wire walk.