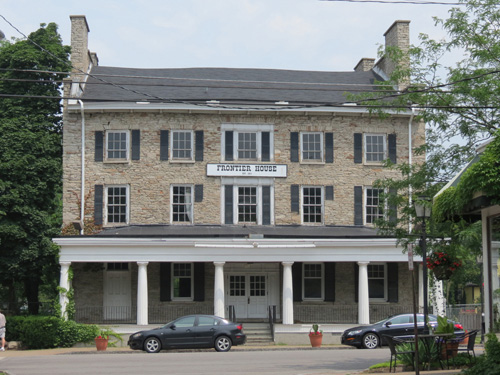 In a pre-election interview with a daily newspaper, Village of Lewiston Mayor Terry Collesano was quoted as saying he was disappointed in what he termed "lack of movement" at the historic Frontier House on Center Street. Collesano said he "was becoming very discouraged" and had a "disappointing" meeting with Frontier House President Alan Hastings. He called for action by the end of June.

Hastings told the Sentinel he didn't appreciate Collesano's comments, and wants to set the record straight on the Frontier House, which is owned by his father, Richard Hastings.

"I have been spending my own money marketing Lewiston as a whole," said Hastings, who operates the successful Silo Restaurant on Water Street. Of the Frontier House, he said, "I'm trying to bring us a microbrewery, which would complete our hospitality offerings. I'm pounding the pavement trying to get financing for the Frontier House, to save it, preserve it, and make it something we can all be proud of."

There's no debating the Frontier House needs repairs. Hastings said he's doled out considerable money in the past year to ensure the building doesn't further deteriorate.

"I've spent $50,000 on this effort in the last nine months, $20,000 on the roof alone," he said. "I know this is bigger than I can handle alone. I've employed Stacey (Sheehan), who has been working steadily at this for a year. She has written grants, a business plan, historical tax credits, partnerships, successfully explored all of our possible paths, come up with creative solutions, but Mayor Collesano seems very disinterested. I've closed businesses, sold properties, shelved other endeavors. I'm trying here. It's fine if he doesn't want to assist; he isn't obligated. But what bothers me is his (comments), acting as though he has done something - anything - to move us forward on the project."

Hastings said he offered to sell the Village of Lewiston the Frontier House parking lot. He has allowed the municipality to use it, and he said he offered it to Collesano at a reasonable price.

"In no uncertain terms, he said they couldn't afford it," Hastings said. "Stacey and I met with him. We were surprised he wasn't more interested, given all the complaints about lack of Center Street parking."

In the article, Collesano mentioned the village's efforts to find additional parking spaces. Hastings said the acquisition of the Frontier House parking lot would help in that endeavor while providing him with additional resources to fix the building.

"He could have greatly relieved parking congestion, and with the proceeds I could have made a dent in restoring the building," Hastings said. "It was a perfect scenario. I guess maybe he doesn't really understand the parking concerns? I don't know. I'd like to see a mayor go talk to the businesses on issues like this, when designating spending and budget, and ask them, 'Would a centralized municipal parking lot be helpful to you? How would it affect your business? Should I make this a priority? Would you support this purchase knowing it would break ground on restoring The Frontier House?' "

Collesano suggested his comments were made a month before the article was published.

"Things have transpired since then that changes a little bit," he said, though he didn't elaborate. He added, "I don't think there's a disagreement (with Hastings)."

"I still would like something by the end of this month," Collesano said. He wouldn't say if that was a progress report or some additional building repairs.

With regard to Hastings' offer to sell the Frontier House parking lot to the village, Collesano said, "No one's come back on that. That was just a brainstorming thing that was thrown out there."

When asked if the Village Board would consider such an offer, the mayor said, "It's something we could look at, but I don't know if that's going to be in the picture with what could happen in the next couple days."