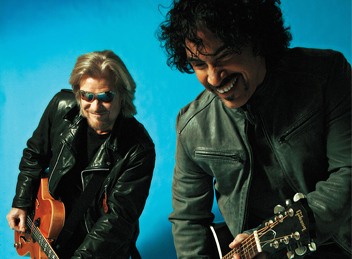 By now, Artpark fans know the venue has an all-star lineup of musicians booked this year. All summer long, patrons can listen to the likes of Ringo Starr, Aretha Franklin, Heart, Sarah McLachlan and Lorde.

Though Hall & Oates rose to fame in the 1970s and 1980s - behind a slew of hit songs including "She's Gone," "Sara Smile," "Rich Girl," "You Make My Dreams," "Private Eyes," "Kiss On My List" and "Maneater" - the band is in high demand in 2014. Hall has a popular music spotlight series called "Live from Daryl's House." Oates, meanwhile, released a critically acclaimed solo album, "Good Road to Follow," in March.

Together, Hall & Oates are selling out large concert venues such as Artpark.

"Well, it's something I never kind of imagined back in the day," Oates said in a phone interview earlier today. "If you would've told me this back in the '70s or '80s, that, you know, in my mid-60s, in 2014, I would be as popular, if not more popular, than ever before, I wouldn't have believed you. There's no way I would've believed you.

"It's a testament to our songwriting. It's a testament to the records that we made, and the fact that our songs have stood the test of time, and that a whole new generation has (discovered) our music. It still means something; it still resonates.

"The result of all that is that we're out there playing; and people are excited to see us, and go away from our shows happy and feeling like they really had a great time and heard the music that they love - and that we bring energy and passion to the old songs, and are able to deliver them in a way that turn people on."

Oates said he enjoys performing at outdoor venues like Artpark.

"That's what it's all about," he said. "I love playing outdoors - especially when the weather's good."

"After the winter that you guys had, I'm sure everybody's glad for summer," Oates added.

"The outdoors just seems to absorb the music, and everyone is always in a good mood, so playing outdoors is fantastic," he said.

"We have a professional responsibility to play a lot of the big hits that people kind of expect to hear," Oates said. "I think that's just part of being a professional performer."

Expect, then, to hear a catalog of timeless, sing-a-long songs.

"At the same time, we spice up our set with a lot of album tracks," Oates said. "We throw in songs that we find musically interesting - that we like; that we think are cool; and maybe have been overshadowed by some of the big hits.