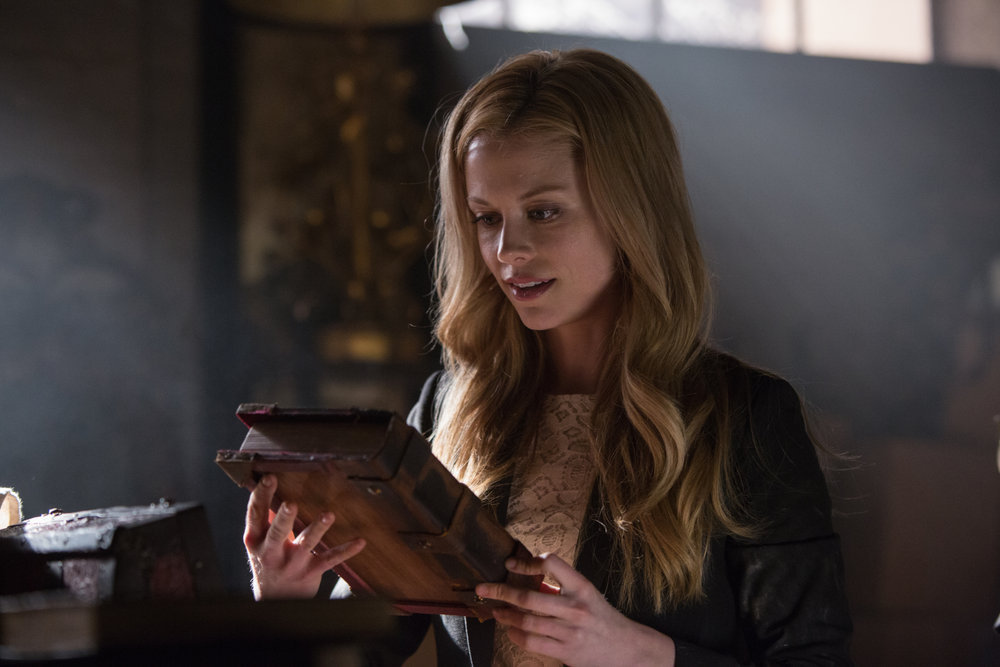 'Grimm': The bad girl is back

In three seasons, Portland Det. Nick Burkhardt (David Giuntoli) and his "Grimm" gang have squared off with an assortment of villains, vagabonds and wesen. But not one bad guy has been as much a thorn in the side as one bad girl: Adalind Schade (Claire Coffee).

She tried to kill Nick; she messed with Hank (Russell Hornsby); she even poisoned Juliette (Bitsie Tulloch). Adalind is a hexenbiest, and a nasty one at that.

But for a moment this season, it seemed Adalind was turning a corner: She gave birth and bonded with Nick's mother - she even sought refuge from Nick and Juliette (Bitsie Tulloch), the couple she once separated with a hexenbiest spell (it's a long story). Motherhood seemed to suit Adalind - even if her baby was oddly powerful, really creepy and probably evil (mom is a witch, after all).

Unfortunately, Prince Viktor and the Royal Family want said super baby, and wouldn't think twice about killing Adalind and all of the above in order to take the tyke. In order to throw the blue bloods off the trail, Renard (Sasha Roiz), the baby's father, "offered" to give Viktor what he wanted. Unbeknownst to Adalind, Renard and the "Grimm" gang stole the baby back (wearing masks), and sent the child off with Nick's mother.

This did not sit well with Adalind and, in Friday's season finale, she will do whatever it takes to appease Viktor, whom she believes has her baby.

"She's incredibly motivated to get her baby back," Coffee said Wednesday on a conference call. "Her baby is - you know, she's got tunnel vision where that is concerned, because I think she just feels a little bit aimless and lost without this child now to - that she's learned how to love another human being.

"So she - I don't think she fully understands the ramifications of what she's about to do, but she feels within her right to do it. And yes, it causes a massive rift in Nick and Juliette's relationship, and it changes them - maybe forever, we'll just have to wait and see."

Adalind casts a new spell, which turns her into a Juliette lookalike, and allows her access to Nick, whom Viktor has targeted.

"I think that she's a more dangerous villain, I think, because she's operating of her own accord, and she has this powerful motivation now," Coffee said.

In the end, Adalind is a bad girl.

"You know, they say, like, 'You can't teach an old dog new tricks.' I think she knows one way of getting what she wants, and that's death and destruction via magic spells," Coffee said. "So she, you know, she's using what she knows, and I don't think she's ever - she's not going to be good, but I think she feels just and justified in what she's doing and the steps she's taking."

It's interesting to watch Coffee play this character, who is oftentimes very unlikable, because the actress herself is quite likable. She's shown a romantic-comedic side in other roles, and her online NFL picks are witty and downright amusing.

"I think, you know, I try not to judge what she's doing; I just try to figure out why she's doing it," Coffee said. "And I think it's really important not to - when you're playing the villain, don't - and actually just in real life - if you try to be liked and if you try to make people like you, that's the surest way to get people to hate you.

"So I think, you know, I just try to do my thing and kind of be true to the character as best as I can. And just - yes, hope that nobody starts throwing rocks."

The "Grimm" season finale airs Friday at 9 p.m. on NBC. Find more about the show online at http://www.nbc.com/grimm.