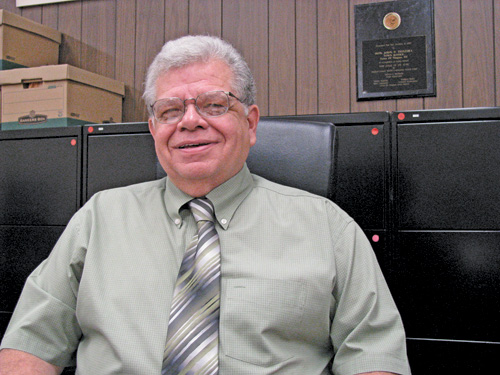 Town of Niagara Supervisor Steve Richards submitted his official resignation and retirement to the town last Friday (May 2) and on Monday pleaded guilty to a reduced charge of official misconduct before State Supreme Court Justice Christopher Burns in Lockport.

Sentencing is scheduled for July 14.

Meanwhile, the Town Board is expected to discuss the process of appointing an interim supervisor and the election of a new supervisor in November when it meets with the town attorney in executive session before its regular 7 p.m. work session today, May 8.

At Monday's court appearance, Attorney Scott Hapeman of Personius Melber LLP, read a statement on behalf of Richards: "After considerable deliberation, Mr. Richards determined that this resolution serves not only the best interests of his family, but also the best interests of the residents and employees of the Town of Niagara. Mr. Richards apologizes to the community for taking advantage of his office in this instance, but remains steadfast that the town is now in a far better position fiscally and from a quality of life perspective then it was when he took office 19 years ago."

According to state Attorney General Eric T. Schneiderman, Richards' guilty plea was for official misconduct, a class A misdemeanor, for using Town of Niagara workers on town time in Town of Niagara vehicles to pick up and deliver a catch basin to his personal place of business. Richards is to make restitution to the town of $1,240.37, he said.

"Steven Richards has admitted that he misused his position and used town resources to benefit himself personally, abusing both his office and the trust placed in him by the public," Schneiderman said. "He has vacated his office and submitted his retirement papers last week."

Richards had been accused in the original 28-count indictment from 2013 of taking supplies such as paint, screening, drain cleaner, sign posts and an outdated police shotgun from the town, and using town employees for non-town duties over the past years of his tenure. Three of the counts already had been dropped by the attorney general's office before Richards decided to accept the reduced charge.

Members of the Town Board willing to comment on the record on the matter had mixed reactions.

Councilman Rob Clark, a Richards opponent, noted: "It was a long time coming, but at the end of the day, the town is still going to operate. It's run by good employees and good department heads. The Town Board is going to ensure that this never happens again. It's time to move forward."

Sklarski said: "In my opinion, he (Richards) was a very good supervisor for the Town of Niagara. He brought economic development to our town, which not only benefitted our town, but the entire county, and that expertise may be lost. It's my hope that the new supervisor, whoever they may be, can carry on the leadership that's been provided to our town throughout the years."

Sklarski said he believes other councilmen on the board have a different perspective on the supervisor position. "The democratic process has to prevail. No one should act as an impediment against this process, including me. The majority rules, and that's the way it should be," he said.

Being supervisor is not in his immediate plans. While in church on Sunday, he opened his Bible and found Psalm 59, and ended up reading it four times, Sklarski said, advising questioners to look it up. "What it said is what I'm doing."