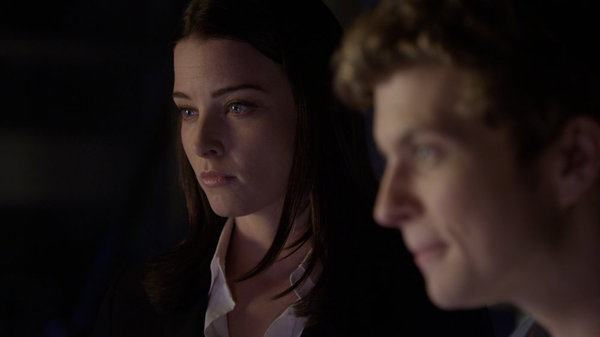 Interview: 'Continuum' improves upon its past

How many times have you watched a TV show and thought, "Why did they do that?" Or, "Where is this story going?" Perhaps even, "I wish they wouldn't have killed off that character." Wouldn't it be cool if, just once, a show actually went back and made major revisions to previous episodes?

That's exactly what Syfy's "Continuum" is doing in season three. The time-jumper is fixing the past to create a better future - both on-screen and off.

Though creator and showrunner Simon Barry wasn't in need of fixing season two - in my estimation, it wasn't confusing, annoying or prematurely offing popular characters - he opted to do so for the greater good, which is a richer story.

Ironically, he sent his characters back in time for the greater good, too.

In season one, City Protective Services officer Kiera Cameron (Rachel Nichols) was inadvertently sent back 65 years in time, to the year 2012. Leaders of the alleged terrorist group Liber8 stole a time-traveling device in the hope of escaping the death penalty (and shifting the balance of power in society). When Kiera tried to stop them, she was taken from 2077 - from her husband and son - and transported to the present time.

Kiera was desperate to find a way back to her family.

In the first season-and-a-half, she was solely focused on returning to 2077. But toward the end of the second season, she started to realize the future might not be all it's cracked up to be.

Now in season three, Kiera is struggling with the idea of sacrificing her family - as well as her present day friend and sidekick, Alec (who, in 2077, created the time travel device), and her Vancouver Police Department partner and confidant, Carlos - to do what's required to create a better future.

"So, I think season three for Kiera, for me, has been very much about the idea that, although I love my husband and I miss my son and I would like to get back to them, the better thing to do was to stay in this time and to try to change things to make the future that I come from not exist at the risk of sacrificing my husband and son for the greater good."

At the end of season two, Alec used the time travel device to go back seven days and save his recently murdered girlfriend, Emily. In season three, his actions have dire consequences, forcing the Freelancers to strike a deal with Kiera. She doesn't trust them, but works with them to try and stop Alec.

In doing so, "Continuum" allows its characters to rewrite previous episodes and create different results.

Kiera, in revisiting the past, is further emboldened to reshape the future - even if it does cost her everything she holds dear.

"When she left 2077, it was very black and white; there was good and there was evil," Nichols explained. "She was good; Liber8 were evil; that's it. And as she comes back and she starts spending time in the present day, and she sees what is offered in the present day, and she begins in season one and season two to learn how rough her future is, I think a lot of her strength comes from the idea that - her sadness comes from not getting back to her family; there's that problem that's always hanging over her head. But her strength comes from the idea and the lessons that take her, you know, the first two and the beginning part of three seasons to learn.

"She has the opportunity here to make a better future for everyone and, although it may cost her significantly in reuniting with her husband and son, meaning that that may never happen, she derives her strength, I believe, from knowing that she can exact change. And she may have to form alliances and she may have questionable relationships with people that she once was trying to put to death, but there is the opportunity here to enact change that will make 2077 a much better place.

"And I think knowing that for her at the back of her head, somewhere, even when she's completely alone and at odds with Alec and at odds with Carlos and very confused about who the Freelancers are, I think in her moment of darkness, the idea that she can - she has the power, while collaborating with other people to make a better world for, essentially, all of humanity, I would say she derives her strength from there."

Nichols said "Continuum's" unique storytelling is one reason it has attracted viewers while other sci-fi shows have struggled with ratings.

"I think it has a lot to do with the writing, but I will tell you why," she said. "I think that what makes our show very interesting is, first, you have your time travel element, which allows for a very large number of stories to be told. And provided that you create a mythology of time travel for your show when you're writing a show and you stick to it, it's a suspension of disbelief. If you do it right and you follow the rules of your own time travel mechanism, then it's easily believable and people expect it from the beginning.

"Then you go to the characters in the show. Now, we have at the beginning, you know, you've got the CPS from the future, you've got Liber8, you quickly learn about Alec Sadler and then you get in the VPD from the present day. And there are so many characters that there's a little something for everyone - everybody that watches the show.

"Even someone that wants a procedural show can tune in every week and we do solve a problem."

"So, I'd like to think that there's something - there's one character that every audience member can relate to, and then there are various relationships that every audience member can relate to," Nichols added. "And keeping ... with the mythology, I think, is a very important part of the show, as well. And so we have our set of rules, and we stick to our set of rules, and then people keep tuning in every week because they know that they're not going to be disappointed."

"Continuum" continues it time-bending adventures each Friday at 10 p.m. on Syfy.