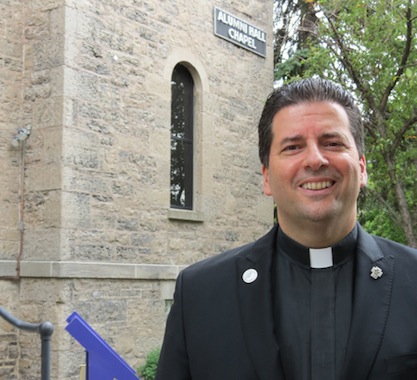 Maher to be inaugurated as Niagara University's 26th president April 4

The event, which takes place at 3:30 p.m. in the Gallagher Center, will serve as the centerpiece of a full week of activities intended to celebrate the university's rich heritage of academic excellence and community service.

Maher commenced his term as president of Niagara University on Aug. 1. He succeeded the Rev. Joseph L. Levesque, C.M., who stepped down after 13 years in the university's president's office.

Maher joined Niagara by way of St. John's, where he served for 23 years, including the past two as executive vice president for mission and student services. He had served as a Niagara trustee for nearly three years at the time he was named president.

Maher's formal inauguration ceremony will begin at 3:30 p.m. on the Gallagher Center's upper level. Doors open at 1:30 p.m. for the public event, during which Maher will assume the powers and responsibilities of the university's presidency.

Members of the Vincentian community, as well as elected officials and delegates representing fellow academic institutions, will join the NU community in commemorating the occasion.

Levesque, who is currently serving as interim president of St. John's University, will conduct the investiture of Maher prior to the new president's address.

The Gallagher Center's upper level will also serve as the site of the inaugural liturgy, which will take place at 11:15 a.m. on April 4. The Most Rev. Richard Joseph Malone, the 14th bishop of the Diocese of Buffalo, will preside. The Rev. John T. Maher, C.M., James' brother and a 1976 Niagara graduate, will deliver the homily.

St. Vincent's Hall (Room 407) will serve as the site for a symposium on economic development and higher education at 4 p.m. Panelists include:

During his tenure at St. John's, Maher was involved with the university's Bread & Life Program, the second largest emergency food provider in New York City. After completing his first marathon, a Bread & Life board member suggested the idea of a "Run Against Hunger" as a way to raise funds and awareness about poverty and hunger in the area. Maher would go on to compete in 10 more New York City Marathons in support of the cause, which he is bringing with him to Western New York.

On April 5, Niagara University hosts its inaugural "Run Against Hunger," a 5K on-campus race intended to generate proceeds for the Heart, Love and Soul food pantry in downtown Niagara Falls. The event is open to the public.

To view the complete inauguration week schedule and register for events, visit www.niagara.edu/inauguration.

Founded by the Vincentian community in 1856, Niagara University is a private liberal arts university with a strong, values-based Catholic tradition. Its four academic divisions include the colleges of arts and sciences, business administration, education, and hospitality and tourism management. The university also maintains an Academic Exploration Program that provides a learning environment for students who are undecided about their major. As the first Vincentian university established in the U.S., Niagara prepares students for personal and professional success while emphasizing service to the community in honor of St. Vincent de Paul.