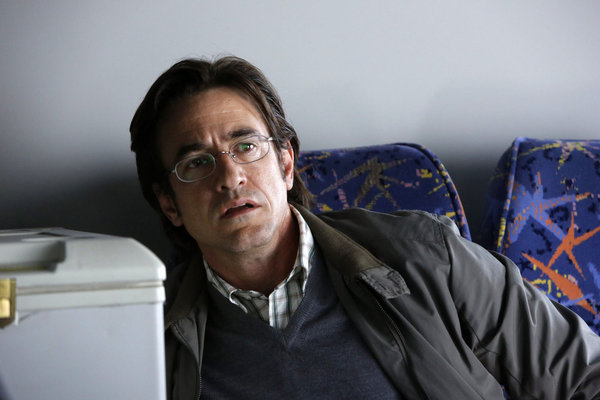 The first episode of NBC's "Crisis" was delightfully twisty. A busload of Ballard High School students is kidnapped; these teens, the offspring of D.C.'s power players, are used as pawns as their parents are forced to work for the captors.

As one twist gave way to another, it was unclear who was behind the attack. The show's intentional misdirects left us wondering who was good, and who was bad.

As the series continues, one of the biggest mysteries lies in the character of Francis Gibson (Dermot Mulroney). The CIA asset was with the students when they were captured and taken to an empty, large home. He was one the bus to chaperone their field trip, hoping to spend time with his estranged daughter, Beth Ann (Stevie Lynn Jones).

Those he's quickly defined as weak, Gibson tries to find courage. He attempts to take out one of the captors, but is quickly rebuffed, double-teamed, and loses a finger for his insurgence. Gibson is taken away into a back kitchen where it's revealed the kidnappers are working for him. He has a notebook containing the government's defensive playbook, and monitors the FBI and its interactions with the parents.

His seemingly heroic actions to try and free his daughter and her classmates appeared to be a ploy to place him in better position to control the chess game.

Gibson had all the makings of a villain until the end of the first episode, when we learned the CIA targeted his daughter. As the credits rolled, we didn't know his endgame, or what he would do next.

Q: When we first see you, it looks as if you are among the taken. But then it turns out that you may not be who you first appear to be. Can you talk about the hidden elements of your character?

Dermot Mulroney: I can talk about them; sure. There are more hidden elements of the character of Gibson then the (viewer) has any idea about.

There's an incredible plot twist, several of them, in fact, in this opening episode. But what you need to know is that this keeps happening week after week - it's what makes this show so fun. As it evolved in its story, I just kept being so pleased by the twists and turn of the plot. So, what I say is there's more to come if you like that.

Q: Your character is a part of the scheme and the kidnapping ... but he also has his own daughter involved. Can you talk about how we're going to see that affect him? Are we going to see him torn?

DM: Yes, the story gets really crazy, but what stays the same is how much he loves his daughter, and how important it is for him to repair his relationship with her and put his family back together.

Now, his intentions are good. You will see that his methods are questionable at times, but then you'll learn how effective it is. And so the story makes you really question motives versus results. It's very smart in that way.

Another thing I love about it is there is a lot of story coming at you really fast, but I'm more surprised to how clear it is. In other words, it's complex, but - the show is complex, but it's not confusing. You'll see what I mean. It's really great the way they were able to do that.

DM: No; I have no preference. I prefer that people wonder. But, yes, I do know for myself, and quite clearly, is that he is good. There's no other choice as the person hired to portray this person than that, but there will definitely be - people will wonder that for themselves. Again, maybe I said something to that effect before, but his intentions are good.

Q: I'd like to ask you what you admire most about Gibson?

DM: Oh yes, well there are two things: his, you know, his heart, and his mind. I very much admire the reasons that he goes to the lengths that he does and makes the decisions he does, which is an intense and profound love for his daughter and his family. But the thing that most impresses me about Gibson is how truly genus he is. It's fun to play a character that is vastly more intelligent than I am, to be frank. It made me feel really smart.

Q: We saw Gibson in the first episode as being pretty surprisingly strong and in control. Are we going to see weaknesses at some point soon?

DM:  Well his weakness of course is - no, I'll answer it this way: Not everything in Gibson's master plan is going to go as he conceived.

So, some of the fun parts of the series are to see Gibson think on his feet and have to adapt to the changing situation. So, there's that tension between knowing that he has a great plan and learning that it's not going according to that plan, and what's the character going to do next becomes part of the series.

It is a good question for that reason because, yes, he - he's always close to having everything under control, but it's not as simple as that. As I said, it's a very complex story, so he has to adapt as it evolves.

Q: You have, obviously, done a lot of movies over the years, and in that case you would have a lot of the answers and the plot points ahead of time. Did you like not having all the information with this project? Was it something that was more of a challenge for you? Was it exciting for you sort of coming in and not having all those answers?

DM:  Yes; it took me about two or three episodes before I really embraced it, and then I loved not knowing. And I enjoyed - you know, that reading of next week's script became so enjoyable that I just - and me wanting to know what was happening next wasn't going to make the scripts be written any faster.

I should be clear, there were very specific story points that I was aware of, and needed to be, in order to play the character who knows the whole plan. But I didn't know how the other characters were going to develop or how their storylines end up crossing, things like that.

The intrigue of the story was the reveal for me each week and so, to answer your question, I loved it. But not at first. I had to adjust to that way of working. As you said, a screenplay ends on a page number, and then you close it and you know everything that happens. So it was very different for me.

For those wondering about Gibson's hand, Mulroney offered one more tidbit: "You'll see that the amputated pinky comes into play. I mean you saw the kid put it in the cup of ice, right?"

"Crisis" airs Sundays at 10 p.m. on NBC. Learn more about the show online at http://www.nbc.com/crisis.