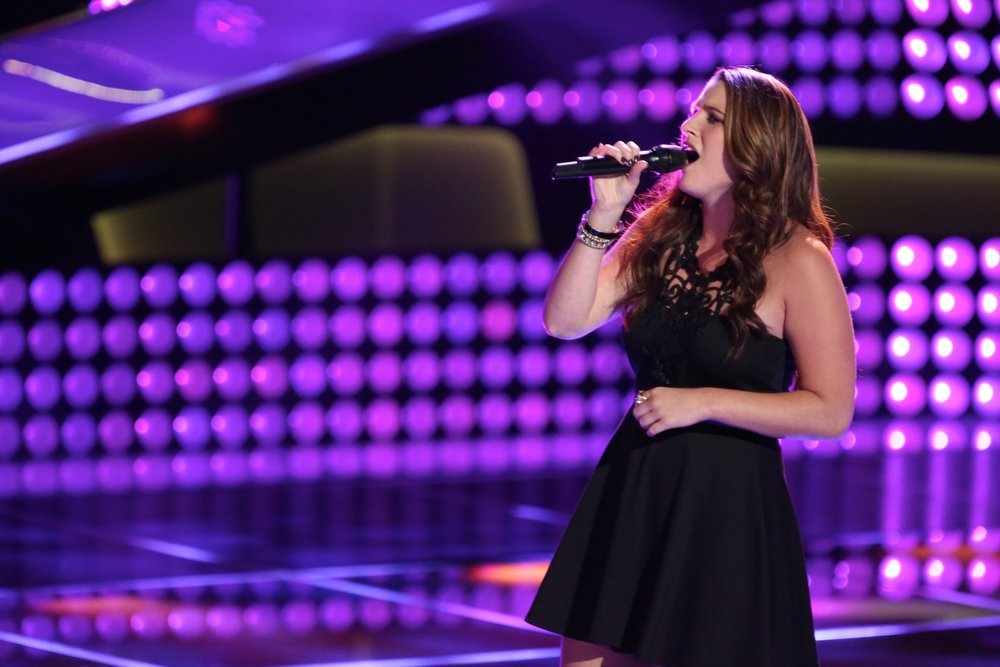 'The Voice' is a second chance for Sisaundra Lewis, Emily B., Audra McLaughlin

In week two of the blind auditions, "The Voice" introduced us to Sisaundra Lewis, 44, who previously worked with Celine Dion and served as vocal director for Celine's tours. Sisaundra took a break from music to raise her family. Now that her children are a little older, she hopes to take center stage.

Following Sisaundra's spot-on rendition of Aretha Franklin's "Ain't No Way," all four coaches turned their chairs to signify their interest in the singer.

"I realize, right now, that I am completely in over my head," Blake Shelton said. "I'm so glad I turned around in time enough to see you perform. ... I would buy your record if it came out tomorrow."

"Your performance was so electric, and the way you performed was so powerful that it really helped me love you even more," Adam Levine said. "But for as great as that was, I still do not think that that was your best, which makes me think to myself, 'Wow, if I don't think that was her best, what does her best sound like?' "

Sisaundra, hoping to be the best, opted to join Team Blake.

Speaking to reporters Tuesday, she told BTS, "At this point in my career, I would love to - I've had the opportunity to step center stage, and all my career I've always been the supporting cast. So with 'The Voice,' they enable us to be able to step out front - to tell our stories, our lives, our journeys, and give the American public the opportunity to vote, and also to work with masters in the craft of vocals, vocalization and music. So, I couldn't think of a better way if I were to start something at this stage in my life, than to be on this show to make it happen.

"I always say 'I'm not an island,' and to have such a huge company like 'The Voice' and NBC to create a show like this for artists like all of us, is just a blessing."

Though she's worked with Celine Dion, Sisaundra is not "famous by association."

"Well, it is definitely a myth that you are famous based on your association or you're successful (by association)," she said. "It's a blessing to work with all of those people, but I've had my days - my months - of sleeping on the floor, starting my career from the jingle industry. You know, there are very serious days of hunger, and the desire to be heard not knowing which way to go - not having any direction. So, it has not been an easy journey. So to be able to get to this point and have something like this, you're just kind of, like, just in shock that it's available to you."

Sisaundra is ready to record, tour and be a solo artist - "everything that's connected with the music industry. I definitely want to go out and do it and be center stage for the first time in my life," she said.

For 33-year-old Emily B., 33, music helped her get through a series of unexpected brain and eye surgeries. "The Voice" is her triumphant comeback.

"Music has been part of my life from day one," she said Wednesday. "I grew up in a musical home, so it's always been my outlet - regardless of the situation I'm in. But when I went through my health scare, it definitely put things into perspective because, actually, one of the side effects of my brain surgery was that I lost my voice for about six weeks. So, life was put into perspective, and I found this new way of looking at my voice and the gift I've been given. And, thankfully, that was given back to me after it'd been gone.

"So my new approach was that I was going to approach singing with no fear and using it as a tool to encourage others and inspire others. And so I feel like 'The Voice' is the perfect platform for that. And, yes, I do feel like it's a second chance, because I had this fear of even living, and then having my voice taken away. So for me to get to sing on this platform, it's just gone beyond my wildest dreams and expectations for myself. And also not to mention that I'm 33 years old, so any opportunity like this coming for someone my age - yes, this is definitely a second chance, and I'm hoping, again, that I can use my experience and what I've been through to inspire other people."

Usher complemented Emily's ability to make the song her own.

"I think your falsetto is incredibly strong, and you nailed it," Blake said.

"I think it was a very intelligent decision to change the arrangement," Shakira said.

Emily, as Shakira put it, made a second intelligent decision in joining Team Shakira.

When asked how it felt to have four music industry titans praise her performance, Emily said, "I think the only word I can use to describe this whole thing and knowing you have people of such stature comment so kindly on your talent is 'surreal.'

"I mean, these guys are awesome. They're some of the best in the industry, and to have them give you a compliment - I mean, you always hear from your mom and your family and stuff, which is great. No offense to them, thank you, but when you have someone like Usher, Shakira, tell you that you're good, and tell you that they love your voice and they want to make you better, there's no words that can describe how valuable that makes you feel, and how awesome it makes you feel. It's unbelievable."

For Audra McLaughlin, 21, "The Voice" is a chance to prove to her naysayers - bullies and those who didn't value her intelligence or ability - that she is a special talent.

"I was compelled to turn around by what I heard," Adam said. "And then when I saw what I was listening to, I was even more overjoyed, because you're beautiful."

"You are a beautiful girl, but I really wanted the world to recognize you for the amazing, immaculate voice that you are," Usher said.

"Your voice is out of this world," Shakira said. "It has raspyness, sweetness; it's got power. It's just missing one tiny little thing: It's missing me. I'm the missing link. I can help you get to the top."

"My wife introduced me to that song," Blake said. "I used to watch her perform that song night after night. And so, when you started singing it, I was holding you to Miranda's standard. And when you hit the last note, you know those fireworks that go off and they spell stuff? It said 'Team Blake.' "

"I'm just so in shock, I guess. And it's just so amazing to have this opportunity, and I'm just really blessed to, honestly, just be here and be able to live my dream," Audra told BTS Wednesday. "And it was just amazing. It was kind of like an out-of-body experience, I guess. That's the only way I can explain watching myself on TV last night, and seeing all the amazing things that each of the coaches had to say about me. And they're all really idols of mine. So hearing all of the things that they were saying about me just really hit home for me and I - 'The Voice' has seriously, really, changed my life, and it's really given me the chance to finally follow my dreams."

"I just think that getting this opportunity has really just changed my whole outlook on life; and with everything I've been through, it's just been so amazing to go through this experience," she said. "And I've learned so much so far, and it's really helped me grow as an artist and I'm just really hoping to continue to be an inspiration to others. And I'm just really excited to still be here."

"The Voice" airs Mondays and Tuesdays at 8 p.m. on NBC.