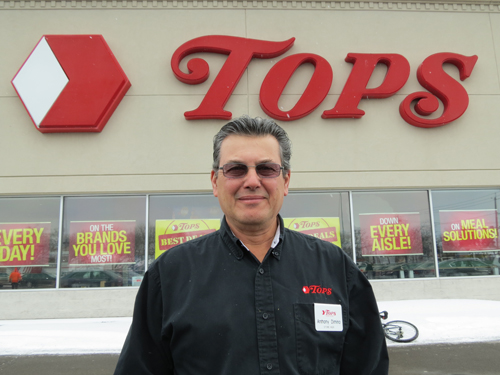 Anthony DiMino stands in front of the Village of Lewiston's Tops supermarket.

Lewiston residents can debate which pizzeria is best, where they'd rather grab a drink after work or hang out on weekends. Where time and money are spent will vary depending on the person.

One unquestioned, undeniable certainty is that almost every one of them will set foot inside DiMino Tops Lewiston to grocery shop. The store is Lewiston's supermarket, its meeting place, and the hub of all village activity.

This month, the grocery store is celebrating its 50th anniversary.

"Without a Tops in Lewiston, it wouldn't be Lewiston," Mayor Terry Collesano said.

"They're the backbone; they're a very good taxpayer. They're good people. It's a good organization," he said. "The DiMino family are excellent people. Very friendly when you walk in. You see ... Anthony, or one of the family members. They've been there - always.

"Just like (Anthony's) father. His father was always very sociable. He'd help you find what you want to find down the aisles. If you're walking down looking for a can of soup, 'Oh, yeah, over here. I'll show you.' And he'd take you to (it).

"Big markets today, you don't see that. So, yeah, you get that personal touch from a family member. It's nice."

Al's son, Anthony, said the decision was "a gamble," but he described his father as a visionary.

"There was a lot of 'first,' " DiMino said. "We like to be first. Our new produce is the first of its kind when we remodeled last year."

Anthony began working with his father in the grocery store business when he was just 5. Today, more than 50 years later, he owns and operates the Lewiston Tops.

"It's very exciting," DiMino said. "Either you have to love the business, or not. It's not for everyone. I can tell you that much. You've got to be a people person, because you're going to depend on a lot of people to do what you do."

"I was kind of born to be a grocery store owner, to be honest," he said. "I learned young; I enjoyed it from the get-go."

DiMino is still learning to this day.

"My love and passion is to go to grocery stores," he said. "In the past two months, I probably went through 80 grocery stores from Western New York to Phoenix, Ariz. And I probably do that, religiously, 20 weeks out of the year. We'll drive down to a certain area and look at grocery stores.

DiMino's store was one of the first to utilize self-checkouts, and a leader in modernizing and refrigerating the produce section. Last year, the store added signage, a new color pattern and began frying doughnuts.

"We try to do things differently," DiMino said. "We're different than any other Tops store. We make things that nobody else makes. Al's Special Recipe Sausage is a recipe that my father took from his mother probably 70 years ago."

Tops was originally built on the east side of its parking lot (facing west). It was remodeled twice before being replaced by a super-sized version in 1998 (facing north - toward Center Street). The new store underwent a major renovation in 2007, and again in 2013.

Today, at almost 50,000 square feet, and with nearly 200 employees, Tops is far and away the village's largest business.

"That was always my father's dream," DiMino said. "He picked Lewiston for a reason."

Town of Lewiston Supervisor Dennis Brochey said it's a real benefit having a supermarket in close proximity.

"There's no doubt Tops is a big asset to the community, and here to stay," Brochey said. "I think what they did to refurbish the building and everything is outstanding. They've always been a good neighbor (and) fit into the décor of the historical surroundings."

Niagara River Region Chamber of Commerce President Jennifer Pauly said, "This market has done so many great upgrades, especially within the past year. It's an anchor grocery store here for this reason.

"We're lucky to have a lot of small businesses and places to get our produce and our meats, but Tops has really been the anchor for this area of Niagara County. And they're a huge contributor to both the business community and the nonprofits, as well, in the area."

DiMino said the secret to success is simple: "It's all about customers.

"You're only as good as you can serve the customer. You have to give them a reason to be there."

"You have to be unique; you have to be willing to give a customer the opportunity to enjoy themselves," he added. "Shopping is not fun, I can tell you that."

"It's a chore; we try to make it as easy and as comfortable as possible," DiMino said. "We're on the floor. We have people to actually answer questions. ... All things that make a good grocery store, we try to emulate."

Customer service is something DiMino learned from his father. He is now teaching his son, John, the ins and outs of running a successful grocery store.

"My youngest son seemed to take to the business," DiMino said. "He seems to enjoy it. Even he goes to grocery stores and reports that he's seen something different. He has two or three sections that he's very good with. Craft beer section, for example, he's like a beer connoisseur. He knows what's going on and trending, and we try to be as up-to-date in that commodity as anywhere in the area."

Pauly said, "Being a family business has its ups and downs, but the DiMino family has found a way to make it work, and that's strong legacy to pass on."

"It's something that is to be admired and looked up to in the community that there's this business and this market that's been run and passed down from generations, and it's still thriving," she added.

Looking back at his store's five decades, and his 30-plus years in management, DiMino said, "I'm proud of a lot of things."

"I'm proud of all the scholarship winners that have gone through our store," he said. "We provide a scholarship every year. We give $1,000 to five candidates each year."

"We've probably, I think we've done it for 18 years, and we have over 100 people who are graduates of a four-year college; very successful people," DiMino said. "Those are the things that make us proud.

"If you think about 50 years of business - and right now we employ almost 200 people - just can you imagine all the people that have gone in and out of working at this location throughout the years? Doctors, lawyers, singers, athletes - the whole gambit of what Lewiston is."

"Fifty years, that's a real milestone," Collesano said. "What I look back on is it started so many young people (in their career). A lot of young people, that's their first job: high school students; college students; young, married couple looking for a few extra dollars.

"Tops has always been a family, as far as I'm concerned. A family to their employees, and they've been like a family to Lewiston residents. That, in itself, is great."

"Everybody should be proud that we're still open, because without their help we wouldn't be here," DiMino said.