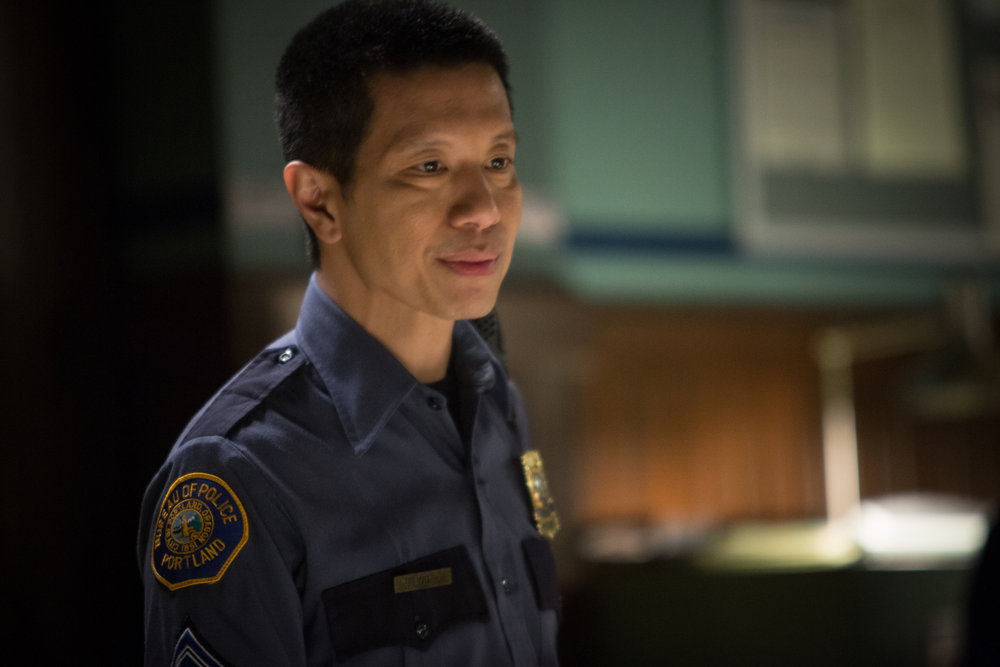 Get to know Reggie Lee; "Grimm" fans, it's the moment we've all been waiting for: Wu is going to see a woge

One look at 40-something actor Reggie Lee's résumé, and you'd swear he was twice his age. With nearly 70 acting credits to his name, Lee is one of the hardest-working actors in Hollywood - and a favorite of some of the industry's top directors.

The Filipino performer's first industry role was in a 1996 episode of "Diagnosis Murder." He had a string of guest roles in series such as "ER," "Mad About You," "Party of Five" and "Beverly Hills, 90210." Lee's career began to take off with a role in "The Fast and the Furious," a recurring stint as the evil Bill Kim on "Prison Break," and parts in "Pirates of the Caribbean: Dead Man's Chest" and "Pirates of the Caribbean: At World's End."

"I've always, from the get-go, had blinders on when it came to my career," Lee said in a phone interview last week. "I was just very driven. I think that comes from my dad a lot. I just wouldn't take 'no' for an answer. I mean, I just kept going.

When Lee isn't working - which isn't often - he can be found honing his craft.

"I treat it like a job," he said. "It's an eight-hour job a day. You know, you go in there, you work on your script; you work on imagining; you work on making it as real as possible. My thing has always been to study. If I'm not working, I'm in class.

"I read for the role of Hank," Lee said. "It came down to Russell Hornsby - who got the role; he's fantastic; that's the vibe that they wanted; he's such an amazing actor - to another guy who was Caucasian - and myself. So, they whittled it down to the three of us to go to network and to test. And we tested.

"Ten minutes later, I found out I didn't get the role.

"They called my agents and said, 'You know, we really like Reggie. We chose Russell for this role because we felt like he had the particular vibe we needed for that role. But we really like him. We'd like to create a role for him. Would he be interested?'

Wu, whose first name will finally be revealed in this week's episode, often lends comic relief to "Grimm."

"I spoke to (producer) David Greenwalt and he said, 'Well, this is what we're planning on doing with him,' ... and I said, 'I'm on. I'm on, man. That sounds fantastic,' " Lee said. "We created this character, and his sarcasm is something that I really love about him. He's very sardonic, and I literally got it out of one line in the pilot, where I thought, 'OK, he's a sarcastic dude, but it had to come from somewhere.'

"Usually sarcastic people are sarcastic for a reason. So I started researching all that stuff psychologically, and off we went."

Wu's first name isn't the only big reveal in this week's episode. After almost three full seasons, Wu will finally see a woge, or a seemingly regular person transform into a Wesen.

"The episode that happens on March 7 is when it happens - is when I finally see something," Lee said.

To set up the reveal, "Grimm's" writers came to Lee and asked if he knew any Filipino folktales. He said he had a bunch.

"They're rich on their folklore," he said. "We chose this one called the 'aswang.' ... It is this creature that we've heard about - that I've heard about since I was a kid. You'll actually see it in this episode, a flashback of (Wu's) grandmother telling me this story.

"It's kind of like telling kids the (Brothers) Grimm fairytales, because you don't really realize that these fairytales are actually freaking scary, and you're telling these kids. It's the same with this particular tale.

"The aswang is a creature which shifts from a human being into kind of this monstrous creature with scales and a really long tongue. And it preys on pregnant women and it eats their fetuses in order to stay young.

"So, this is the episode on March 7, and this is the creature that I think that I will see."

Lee is proud of his Filipino heritage, and was excited to integrate it into this episode. Wu fans will be excited to learn more about the character's backstory.

"What's great is that they've tied it to my background," Lee said. "You'll see a bunch of Wu: You'll see my cousin, you'll see my grandmother, you'll see me. And the reason this all happens is because this aswang starts to attack this couple that I've known for a long time; a girl that I grew up with in the Philippines. I persuade them to come to Portland, and move to Portland. Big mistake, because then they're haunted by this creature.

"And the girl, I actually have feelings for; we grew up as a child. It becomes this love-triangle-ish kind of thing.

"Grimm" is a ratings success at a time when sci-fi shows are hard-pressed for viewers. Lee said that's mainly because of the show's writers and producers.

"They focus a lot on the micro, and they focus a lot on the macro," he said. "There's always the enjoyment of a freestanding episode, where it's like 'creature of the week.' Yet beyond that, there's this long arc, where they deal with the social aspects of the world - this whole royal family; power; what's going on in the rest of the world, and who wants to take power; who wants to change the world. And then you have these little things that happen within Portland, you know, which deal with the personal and the emotional and all that kind of stuff.

"I believe David Greenwalt's answer is the best," Lee said. "We focus a lot on the macro, and then there's the micro. And to blend those two together, I think bodes for a more watchable show."

Of course, it helps to have actors as talented as Lee.

"People are like, 'Oh, you're so lucky.' I am; I've had great opportunities. But I think with those opportunities I've been very, very prepared," he said.

One of the opportunities Lee had was in the blockbuster film "The Dark Knight Rises."

Lee was about to travel to Portland to begin working on "Grimm" when he received an interesting phone call.

"They called and they said, 'Chris Nolan would like you for this (police officer) role. Can you be in London tomorrow,' " he said. "Tomorrow! They said 'tomorrow.' And I said, 'I don't know.' We had to get approval from NBC. I said, 'I don't care what the role is; I'll just go do it. I want to do it. It's Chris Nolan.' "

Lee spent a few weeks working with Nolan in a massive airplane hanger about an hour outside of London.

"He comes to work in a suit, and he's just very relaxed. And he knows exactly what he wants," Lee added. "He's a genius. He's a genius in terms of camera work and getting the shots that he needs. And he doesn't need any more than that.

"He's brilliant. He's brilliant. And what I love about him is his ease. I've worked with Sam Raimi before. Same thing. Those two guys, in particular, really great at their job. Really treat their actors really well, in terms of collaborating. Because they're at ease, you feel at ease with your own work."

Lee's work will be on display this week on "Grimm." The episode will center on his character and "You finally get to see a lot of the nuance that happens behind the sarcasm," he said.

Fans will see why Lee was hand-picked to play Wu, and why he's a working actor.

"I'm really quite blessed. I feel blessed that they've chosen to create a role for me," Lee said. "That doesn't happen very often. And then, on top of that, a series that has lasted up to three seasons - hopefully going on a fourth - for us Asian-Americans, that's about as steady a job as you can get, and tell your parents I still have a steady job!"