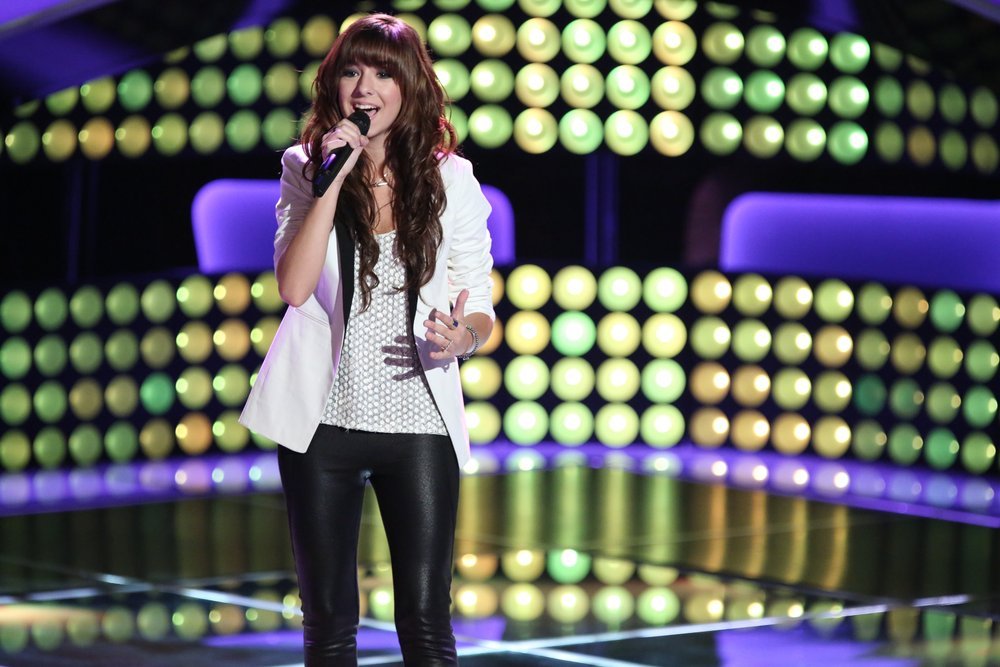 NBC's "The Voice" is the top-rated singing competition on television and well-liked by critics. But if there's one criticism the show gets before each cycle, it's that the show has yet to produce a mega star the likes of "American Idol" alums Kelly Clarkson, Carrie Underwood and Jennifer Hudson, or even a superstar like Daughtry, Jordin Sparks, Scotty McCreery or Phillip Phillips.

That could change this season thanks to "Voice" standouts Christina Grimmie and Bria Kelly.

Both singers debuted on night one of the blind auditions. And both set a super-high bar for the rest of the season six singers.

First up was Christina, 19, who is already a YouTube favorite and has worked with the American Music Awards, Selena Gomez and Disney. She performed "Wrecking Ball" by Miley Cyrus, owning the stage as if she'd performed for 30 years.

"People come out here and they sing, and you never know what to expect," said coach Adam Levine. "And then you turn around, and you start to see how engaging and passionate - and you're more comfortable than I am up there, almost. And that is the moment where you realize that this person could be a huge star."

"I really believe that," he said.

"You were phenomenal," added coach Usher.

"This isn't about them, it's about you, and what you want to do," coach Blake Shelton chimed in. "I just want to help you figure out whatever that is, and make you the winner of this show."

Christina chose Adam, and said Tuesday she hopes to move past her online success. Though she has 2 million subscribers and her performance videos have been viewed more than 325 million times, Christina said, "I just feel like there's only so much you can do with putting your content out on the Internet.

"You know, national television, it's just a whole different ballgame. It's a broader audience, and that's just not something that I've ever been able to do online. No matter how long I've been doing it - what I'm doing online - it's like nothing compared to what one night of being on television can do. So I'm kind of hoping that, you know, if I really stay on the show, that it can kind of really show who I am as an artist and who I am as a performer, and hopefully people just vote for me and whatnot."

Closing the first episode was vocal powerhouse Bria, 17, who was a finalist on season seven of "America's Got Talent." She performed James Taylor's "Steamroller Blues," and netted both four chair-turns and a standing ovation.

"Ladies and gentlemen, we have just heard 'The Voice,' " Usher said.

"You're a star," said coach Shakira.

"You are a stud," Blake said. "You are, and it's just a powerful performance up there."

"You have this energy that just takes over the room," Shakira said.

"Here's the bottom line: I'm your fan no matter what you end up doing," Blake said. "I'm a' buy your record."

He pulled out a Grammy Award, leaped out of his chair, and walked it up to Bria. He gave her an impromptu pep talk before she selected him as her coach.

Bria's choice was something of a surprise as she began her career as a country artist - she even opened for Blake's wife, Miranda Lambert. Recently, she's fronted her own band and added more blues to her repertoire.

On Tuesday, she said, "I definitely want to be able to cut a record, to be honest with you. I don't have the money to be able to do that at this point. I want to work with songwriters - get my own music out there. I have been on bigger stages before, but just, like, locally. I haven't, like, toured or anything."

Though "American Idol" can boast a bigger roster of stars, that show wasn't the right fit for Christina or Bria. Both said they prefer "The Voice."

" 'The Voice' is an extremely nurturing environment, and you can just tell that by being on the show," Bria said. "They don't have any gimmicks, they don't show people who are horrible during their first audition just to get a few laughs out of the audience at home. It's definitely all about the music, and that's something that I definitely wanted to be a part of. It's all positive, and I didn't want to be a part of something that portrays people in a negative way.

"And I think I made the best decision ever by trying out for ('The Voice'), because it's changed my life in so many positive ways. I've met so many amazing people; nobody's really - everybody's so humble, and it's amazing to see how everyone just interacts. Everyone is so happy with this show as a whole, and I'm part of that group."

"Right, this show, for me, is basically just kind of like, you know, it is all about your voice. It's not about the numbers that you've had previously or, you know, things like that," she said. "And for me, you know, coming from YouTube where it's based off of like, 'Oh well, you're already famous, you know,' I've gotten that. And it's like, well, really, like, I'm not at all, because, you know, I've gotten a lot of Twitter, you know, comments last night saying like 'How (do) the judges - how did the coaches not know who you are,' and blah, blah, blah? And I'm like, are you serious? Like, of course they don't know who I am - I'm not a household name or anything.

"So it's kind of like I wanted to, like, extend further than just, you know, 'the YouTube chick who sings covers,' you know? And 'The Voice' is a very nurturing place. And like Bria said, I love the fact that they don't show people doing a crap job on stage, you know what I mean? That's awesome, and I wanted to be a part of that.

"And, you know, I just really do love that it's all about the voice, and you have these four superstars that just want to take you all the way, and build you and develop you as an artist, and I think that's awesome."