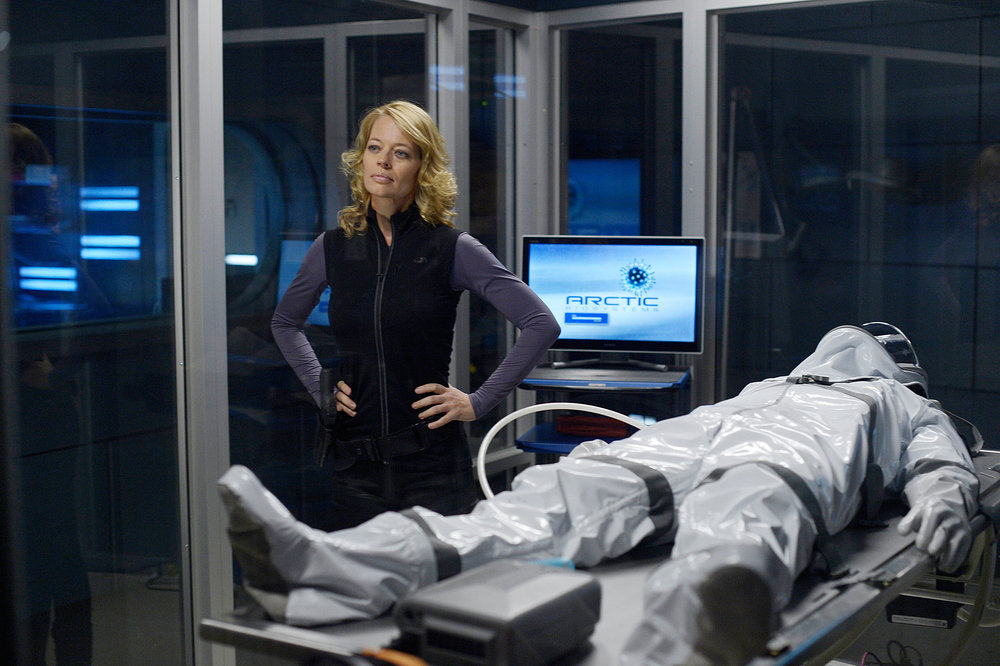 "Helix": Pictured in the Feb. 21 "Bloodline" episode of "Helix" is Jeri Ryan as Constance Sutton. (Syfy photo by Philippe Bosse)

Jeri Ryan, who cut her teeth in science fiction as Seven of Nine on "Star Trek: Voyager," is returning to the genre with a multiple-episode guest-starring arc on "Helix" (and this time she's literally cutting her teeth).

In Friday's episode, Ryan's Constance Sutton arrives at Arctic Biosystems with a small army to check in on Dr. Hatake (Hiroyuki Sanada). It's revealed she is the chief operating officer of the Ilaria Corp., which owns and finances the glacial lab. Constance wants an update on the outbreak that's plagued the facility, and the progress made by CDC scientist Dr. Alan Farragut (Billy Campbell) and his team.

"She's certainly driven, and she definitely has an agenda that she is there to do," Ryan said of her character. "Hatake has gone off the rails. He is supposed to be finding them a virus and a cure, and he's screwed up. He's messing around and doing his own thing, and that's not OK. So she's there to fix it, and whatever she has to do to make that happen is what has to happen."

"She comes in and she takes care of things ... under the guise of corporate benevolence," he said. "She really has this very, very clear agenda and, you know, if Hatake has gone off the rails a little bit, Sutton has not gone off the rails of this. (She's) firmly on the rails, and is trying to make sure that everything happens the way it's supposed to be happening, and try to figure out what Hatake's game is."

"They are - you know, they do good work and they make lots of drugs and they - you know, they - their public face is actually benevolent. But behind the scenes, there's a lot more going on than what you might expect," he said. "And I can't tell too much more than that, but the foundation of Ilaria, the origin story of ... how all that happened, and how the company became what it is, is something that we're going to see over the back half of the season."

Ilaria wants its virus, and Constance is bound and determined to get it from Hatake, or Farragut, or whomever she can manipulate.

Ryan said, "This was a really fun role to play, because it's - she's kind of out there. You know, she's not subtle, which I love."

"Sutton, for us, was someone who put on a very sort of benign and corporate face, which is why she does a lot of corporate speak, but then underneath there's obviously a lot more going on, and Jeri just ate it up. It was fantastic," Maeda said.

While this isn't Ryan's first work with Syfy - she's appeared in episodes of "Warehouse 13" - it is her first science-fiction-based role on the network. Earlier in her career, the actress intentionally shied away from the genre.

"In the very beginning, when I had first ended 'Voyager,' then yes, that was a conscious decision, because one of my concerns when I signed onto 'Voyager' to begin with was that 'Star Trek' is kind of notorious for its actors getting pigeonholed and not really being able to break out and do other things," Ryan said. "And so that was a big concern of mine in the beginning, which, thank God, has turned out to be completely unfounded and, you know, I've been very lucky."

Prior to "Helix" Ryan worked in crime-capers "Body of Proof" and "Leverage."

"More recently, it's just ... I go where the - you know, the interesting roles are, and this was the first one that really sort of caught my interest," she said.

Watch an exclusive sneak peek of the latest "Helix" episode. During "Day 7," Ilaria's COO Constance Sutton (Jeri Ryan) arrives to help with finding an antidote. Or so we think. ...