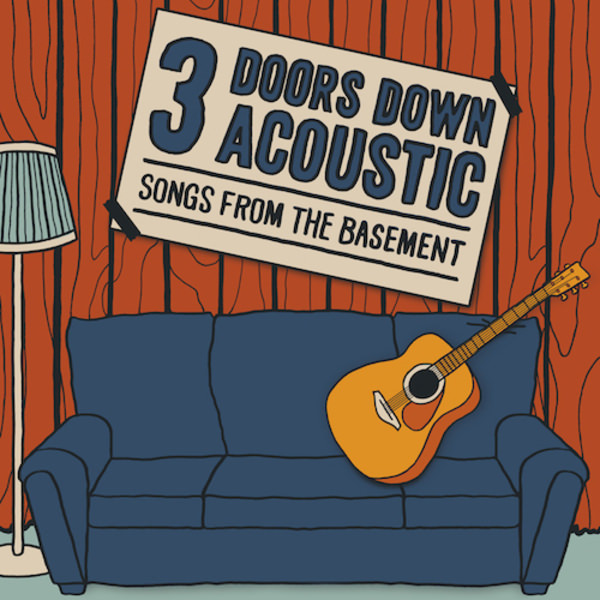 Or you found yourself in a corner with an obstructed view and muddy sound. That was a lot of fun.

Wouldn't it be cool if you could just spend time with a band in the same way you spend time with its music - in a relaxed setting, surrounded by friends, with spot-on sound and comfy seating?

Southern rockers 3 Doors Down are giving fans a chance to catch their set in a manner so intimate you'd think you were sharing a living room or jamming in a basement with the guys.

In fact, that's exactly the mood vocalist Brad Arnold, guitarists Chris Henderson and Chet Roberts, drummer Greg Upchurch and bassist Justin Biltonen have set out to create with the "3 Doors Down Acoustic - Songs From The Basement" tour.

"We did an acoustic show in Nashville and it went over so well - not only for us from the stage, but the crowd; just so much amazing feedback from the crowd," Henderson said in a recent phone interview. After chatting with fans in person and on Twitter, the band decided to bring the super-up-close-and-personal show on the road. "Everyone was blown away by it, and enjoyed it so much. They were like, 'You should take it on the road.' So we decided to try it. You know, book the tour and see what would happen. It's playing out pretty good."

At each "Basement" show, 3 Doors Down is offering an entirely different experience for its fans.

"This one's more off-the-cuff than a regular 3 Doors show, where there's a standard set list and standard start times, and blah, blah, blah," Henderson said. "This is kind of like, we just kind of hang out. It's almost like hanging out. Almost a little bit too much like hanging out!"

He's kidding, but not really.

"It's kind of the garage-band thing," Henderson said. "We're able to set the stage up like - if people go on Instagram or on YouTube and see some of the stuff that's up - I mean, we set the stage up like it's a basement. There's couches and lamps, and we've got people that we sell VIP tickets to that can sit on stage with us."

Of course, you can imagine the reaction fans have to this un-obstructed, in-your-face, this-is-what-a-concert-should-be event.

"It's been great, man; it's been really good," Henderson said. "Everybody's receiving it very well. Everyone is positive with it.

"It's a really cool tour, man. If people have never seen this band before, or if they have, this is a different spin on what we do. It's really cool. The songs, we're playing them like the way they were written, versus the way that we play them live. You know what I mean? Because we've added and subtracted things over the years and made them, like, alive songs.

If that's not enough to excite 3 Doors Down fans, Henderson offers one additional tidbit: The band is working on a new album.

"Oh, that's happening," he said. "We're going to start working on it as soon as this tour is over."

The "3 Doors Down Acoustic - Songs From The Basement" tour comes to Niagara Falls Saturday. The band performs at 8 p.m. inside the Seneca Events Center (Seneca Niagara Casino & Hotel).

The acoustic tour will wrap later this month. Henderson said he's not sure if that's the format the band will offer when it gigs this summer, or if the guys will present a regular rock show.

3 Doors Down is online at http://www.3doorsdown.com.