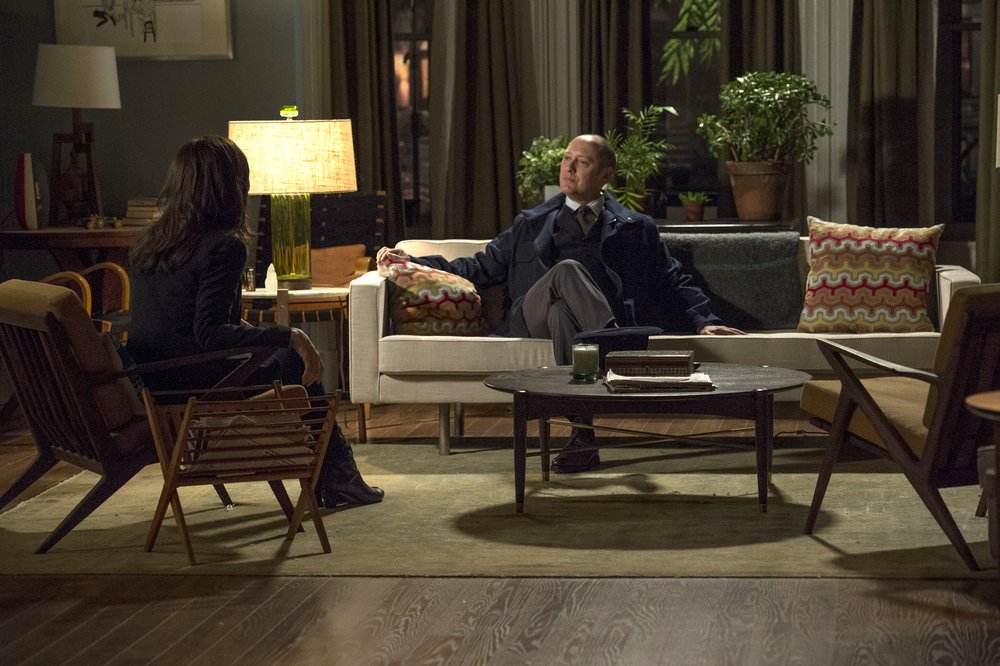 "The Blacklist": Pictured, from left, are Megan Boone as Elizabeth Keen, and James Spader as Raymond "Red" Reddington. (NBC photo by David Giesbrecht)

'The Blacklist': James Spader knocking 'Red' Reddington role out of the park

In the real world, someone like Raymond "Red" Reddington would certainly be looked upon as a man of questionable morals, and not the kind of person one would emulate. In fact, he would be a cautionary tale for those who would seek a life of crime and lawlessness.

Of course, "Red" doesn't exist in the real world; he exists on television. And, on NBC's "The Blacklist," he is extremely likable thanks to James Spader's wonderfully unrestrained performance.

"Red," one of the FBI's most wanted criminals, agrees to turn himself in on two conditions: one, he will offer up a "blacklist" of evildoers worse than himself in exchange for his independence; and two, he will only work with rookie profiler Elizabeth Keen (Megan Boone).

At times, Red is sympathetic, working to protect Liz in some sort of father-figure capacity. Sometimes he is heroic, risking his life to take down the bad guy. Mostly, he is a menacing figure, whom we know has ulterior motives.

Still, Spader's performance is full of such bravura that Red's actions are often seen as laughable. Not in a silly way, or in a manner remotely resembling situation comedy, but in a nuanced, uncomfortable, yet still amusing kind of way.

As Red is threatening to shoot a wayward bank associate, he tells this person's wife he's sorry he can't stick around to sample her delicious stroganoff. In another scene, Red douses a villain with alcohol and places a lit cigar in the guy's mouth. After waiting a few seconds, Red tells the man he can't handle the suspense, and proceeds to shoot the man in the chest.

You can't approve of, let alone mimic that kind of behavior in real life. But on television, Spader's performance is so over-the-top in these moments that we can't help but smile - or at least smirk - and agree "The Blacklist" is this season's best new series.

Speaking of Spader, "The Blacklist" Exec. Producer Jon Bokenkamp said, "You know, I think he's brought the sort of strange sense of humor that the character has, that the show has, and I think that's sort of - that's something that he - he tells me he saw that in the original pilot script. And I didn't see it as much.

"But I do think he, you know, I mean Spader himself has a very strange perspective on the world, you know, and is a funny - a very funny guy. And so, you know, in speaking with him and getting to know him, and starting to get to know his voice, sort of allows us to think in terms of, 'What would this guy say, what would he do, what would he think is moral or not moral?'

"And so, I do think that that sense of humor and that voice is something that he's been helpful in sort of filling out."

Exec. Producer John Eisendrath puts it this way: "Morality. We have a lot of conversations, Jon and I, and then with James, as well, about, you know, 'What would Red - where would he draw the line? Where - what is his view about good and evil, right and wrong?'

"And I think he's very determined that the character not, you know, he's not a psychopath. He's not someone who, you know, has no sense of right and wrong. I think in viewing him with a sense of right and wrong really protects his character from just becoming evil. And I think he's very aware of that, and that is another thing. I think that perspective is something I think he has helped to bring."

One of the biggest mysteries on "The Blacklist" this season is the nature of the relationship between Red and Liz. Many fans predicted Red was Liz's father, but, when asked two episodes ago, Red denied that was the case.

Was he lying? If Red is not Liz's father, why is he protecting her? Why would he only work with her?

Bokenkamp and Eisendrath promise there is an answer ... but we're not going to get it anytime soon.

"Yeah. That's - yes; we - there is absolutely a definitive answer, and it is something that we'll take, hopefully, many years to answer. But it will certainly not be something that we will, you know, lay out right upfront here," Bokenkamp said.

"But we will, you know, as I feel like we've done the first 10 episodes, we'll continue this year to give concrete answers to that and other big questions. They may not just be the final answer," Eisendrath added.

"The Blacklist's" strong ratings led NBC to offer it an early pickup for season two - and provide the showrunners with even more time to tease Red and Liz's relationship.