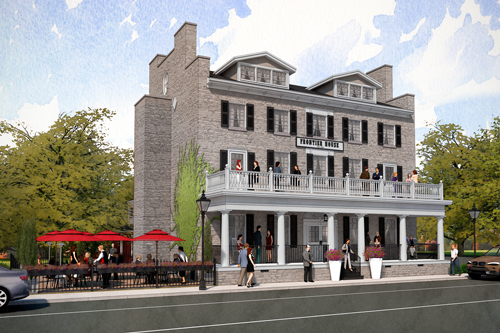 In 2014, the Village of Lewiston mayor intends to partner with Alan Hastings to rebuild the Frontier House, work with Bill Paladino on a new retail plaza, come up with a master plan for Academy Park, enliven the upper plateau, fix the drainage problems on Fourth Street, find new grants and keep the tax rate flat.

To accomplish these things, Collesano will need the full Village Board's help. On Monday, he will install a new trustee - one he hopes will contribute to Lewiston's future success.

Collesano intends to appoint Daniel Gibson to fill out a portion of Dennis Brochey's term. The mayor interviewed six candidates, and said Gibson is the best fit for the Village Board.

"Daniel is a resident of the Village of Lewiston for the last 28 years," Collesano said. "He's known in the community; he's got a lot of enthusiasm. I think he's going to make a great asset to the Village Board."

"I like this man's enthusiasm," Collesano added. "He's new; he's got some great ideas coming onto the Village Board. What I liked about it is he's fresh, but yet he's been here for a long time. He knows Lewiston; he knows the village. I think he's going to make a great impact being a new person coming in on the scene."

Brochey was elected to a four-year term in June 2012. He recently resigned to begin his new role as Town of Lewiston supervisor. Gibson will have Brochey's board seat until this June's election. If he runs for the position and wins, he will carry out Brochey's final two years.

Three four-year positions - those belonging to Trustee Vic Eydt, Deputy Mayor Bruce Sutherland and Collesano - also are up for grabs in June. The only board member who can relax this election cycle is Trustee Nick Conde, who was elected with Brochey in 2012.

Despite his plans for 2014, Collesano has yet to officially declare his intent to run for a second term. He said his decision will come in March or April.

"Right now ... I'm leaning toward (running), because I've got a lot of unfinished things that I would like to see completed," he said.

Two of those things are, of course, the Frontier House and the Paladino plaza project.

For nearly a decade, trustee and then Mayor Collesano and the board tried to reach an agreement with Frontier House owner Richard Hastings and set a course for Center Street's crown jewel, which has sat empty since McDonald's pulled out in 2004. Unable to find common ground, Richard, last year, agreed to hand the building over to his son, Alan, who has had great success running The Silo Restaurant on Lewiston's waterfront.

Alan Hastings intends to refurbish the Frontier House, and convert it into a microbrewery and restaurant. Collesano and the Village Board are committed to this idea, and all parties are looking for grant monies to ensure the project succeeds.

"That is one of our main goals this coming year, is to get something going with the Frontier House," Collesano said. "Alan Hastings has been very cooperative."

The mayor said he and Hastings have traveled the county, speaking with business and government leaders about funding sources.

"Nothing has really transpired from that yet, but we're still working on it," Collesano said. "Hopefully one of the grants or a couple of the grants will come through soon and we can take it from there."

Stacey Sheehan, small business development consultant working on behalf of Alan Hastings, said, "Things are moving about as quickly as we expected with the Frontier House, bearing in mind we are working with several government agencies, and the holidays have been upon us. We are on the cusp of completing the business plan, and are still working very hard on cultivating the funding necessary to break ground. Mr. Hastings is selling properties, utilizing energy credits, and researching grant opportunities. We are preparing for the CFA (state consolidated funding application), which holds the key to the largest pool of funding for us, but one cannot apply until May.

"He has dug in and done what he promised: cleaning things up, securing the premises and addressing pressing issues (leaks, etc.). In December, he took an additional step to secure the building through the coming seasons by replacing the roof.

"We have gone a tremendous way with the business plan, and I assure you that, if we are able to secure the funding to break ground, this is going to transform Center Street, and take local area tourism to some new and exciting levels."

Sheehan added, "I think it's important for people to realize he could open a brewpub anywhere else in Niagara County for one-third of the costs associated to open the business in the Frontier House, and in half of the time. He is taking on a large financial risk, because he loves our community and wants to see the building restored to its previous glory. He knows that, once up and running, it will increase local tourism, and be another notch in our belt, making Lewiston even more of a destination worth exploring! It will complement our other one-of-a-kind local businesses, provide the Center Street parking necessary to support them, and further our collective success as a community.

"It is going to take time, but it's his dream. It's good for Lewiston, and there is a team of us working hard to get there: Mayor Collesano, Clerk Anne Welch, and former Mayor Dick Soluri (among) many others - all who have been active in attending planning meetings and researching funding options. We know that this project matters to our community, and collectively we are working together to get it done."

While Collesano and Alan Hastings are seeing eye-to-eye, the same can't yet be said for the mayor and Ellicott Development CEO Bill Paladino.

In November 2012, Buffalo-based Ellicott Development purchased 756, 784-790 Center St. (including The Country Doctor, Grandpaws Pet Emporium and Smith Brothers Pizza), with the intent of removing the existing buildings and converting the land into a retail plaza similar to what's found across the street in the Colonial Valley and Rite-Aid plazas.

The Village Board was OK with the idea, but opposed the proposal, primarily because portions of the plan called for below-grade units. A proposed fast-food restaurant would be situated behind Center Street with its roofline almost eye-level with the village's main road.

Trustees have been waiting for a revised model since August.

In an email received Monday, Paladino confirmed the project is still in the works, but declined to offer details.

"I had talked to Bill Paladino about two weeks ago. ... He had some revisions to the plans, and he wanted me to give him what my opinion was," Collesano said. "I told him the same thing that was told (to) him at the last meeting, and that was we want to see more retail up on Center Street.

"Their problem is with the landscape of the way the land is situated. They feel that it would be a burden to them to put somebody on Center Street and then carry it down to the lower level. The area's just not suitable for that.

"And I said, 'Well, there's gotta be a way to figure it out.' So, he said, 'OK.' He was going back to his planners, engineers, to try to figure something out."

Collesano said he thinks spring is the new target for the plaza, but he doesn't know when a new proposal will be presented.

"We're just waiting for him to come back to the Planning Board with his set of plans, and we'll take it from there," Collesano said.

In the meantime, Collesano and the board will begin to look at other village issues, the next fiscal year's budget, in particular.

"I'm striving to keep our taxes stable," Collesano said. "At this point, I don't see a tax increase. I hope there won't be, but you never know once you sit down and start working out the numbers. But that's our main goal is try and keep our taxes stable and where they are now."

Whether Collesano runs for re-election or not, he said, "I think we're on the right path.

"I think we're doing a remarkable job with the resources that we have, and I feel that, whether I'm here or not here, the village will move forward. We got a lot of good people in the village, and we have a very good working board, and I'm sure everything's going to work out fine."