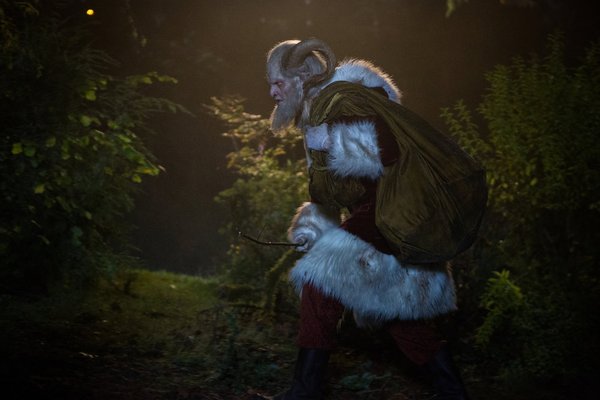 'Grimm' tackles Christmas with its own 'Twelve Days of Krampus'

Giuntoli's character, Portland Det. Nick Burkhardt, began the season as a zombie, was cured (but kept some super-powers), and has since dealt with the three little pigs (who were vengeful, Wesen-killing chefs), underwater sea monsters and a "Hulk"-strong boy who appeared to be possessed. Just in time for the holiday season, he will square off with "Krampus," a giant, horned villain who somewhat resembles Santa Claus.

"Krampus is pretty wild," Giuntoli said. "That guy, I mean, he was - when I walked onto set and I saw the actor dressed - I mean, first of all, we hired a gigantic guy to play this character. And then when I saw him as Santa with these horns, I actually had like a visceral reaction to him. I was kind of frightened in a way. It was a disturbing thing."

In Friday's episode, "Twelve Days of Krampus," a number of delinquent teenagers are missing. As Nick and Hank (Russell Hornsby) and their "Grimm" "Scooby Squad" try to figure out what's happening, an old Wesen tale about an evil Santa-like figure emerges.

"It's - we just ruin it. We just ruin Christmas for everybody," Giuntoli said. "So, I mean, there's an actual legend of Krampus out there, and we've had German people asking us to do Krampus over and over again. And we finally tipped our hat to the fine people of Bavaria, and we're bringing this legend to life. We ruin Christmas for everybody, and it's gory and it's wonderful."

The "Twelve Days of Krampus" is part of a special "Grimm" double-header. The episode will be preceded by "Cold Blooded," which harkens the arrival of a new series villain, Prince Viktor (guest star Alexis Denisof). He arrives in Europe to see what's become of the evil Hexenbiest Adalind (Clair Coffee), and to find those responsible for the death of his cousin, Eric (James Frain).

"The writers have done a very good job of this - what I like to call the slow reveal," Giuntoli said. "You know, we have, I would say coming towards the end of the mid-season, we still have probably two or three contenders for the villain. One definitely - we have kind of a new character that emerges who is one of the, I'd say, two villains, but we have a new character who is one of the greater villains that we're going to have on the show.

"But, I still place the Captain (Sasha Roiz) as a possible villain, and I definitely (count) Adalind as a villain, and then there's one more guy who's showing up here soon (Prince Viktor)."

When "Grimm" returns in January, Giuntoli said Nick and his team will start to deal with the royal family in Europe. "We'll be doing quite a bit abroad," he said.

Additionally, Nick will continue to figure out how his new powers work.

"Oh, yes. Yes. We're going to be playing on this one for a little while," Giuntoli said. "There - it's, like, funny: Every time Nick gets harmed, he's left with this kind of useful side effect, and we're going to definitely be seeing more of that after the break."