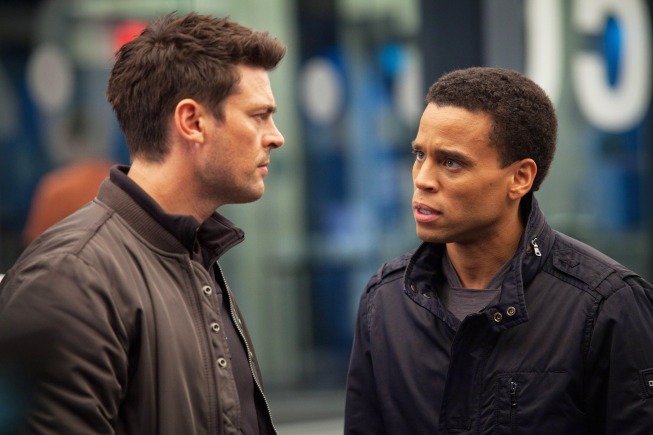 Do you remember the first time you watched "Alias," or "Lost," or "Fringe"?

You marveled at each show's pilot episode. You were intrigued by the plot, the characters, the premise. You hoped each respective story would live up to its opening pages.

Looking back on these series now, you couldn't imagine what a wild ride - what a magnificent journey - each show would ultimately present.

Watching the pilot episode of "Almost Human," you can't help but think you're about to go on that same type of epic TV adventure. And why wouldn't you? All four shows come from the same genius mastermind, J.J. Abrams, and his Bad Robot production company.

"I think that the lucky situation for Bad Robot has been working with really wonderful people who are great showrunners and storytellers," Abrams said.

"With Joel, with whom we worked on 'Fringe' for five years, when he pitched me the idea for 'Almost Human,' it was, I felt like that little kid that I used to be watching 'Six Million Dollar Man,' and all excited about the idea of what the show could be," Abrams said.

Like the scads of cops-and-robbers skeins aired each week, "Almost Human" will solve cases each episode. But that's where the similarities end.

Set 35 years in the future, at a time when the crime rate has risen 400 percent, human cops are forced to pair with android partners. As "Almost Human" begins, Det. John Kennex (Karl Urban) and his team are tracking down a criminal organization - Insyndicate - when they're ambushed and left for dead. Kennex, the sole survivor, is knocked out of commission for almost two years. When he reluctantly returns to the force, he has a "highly sophisticated synthetic appendage" for a right leg. ... And a soldier-like MX-43 robot partner.

When their partnership hits the skids, Kennex finds himself teamed with Dorian (Michael Ealy), a decommissioned android with a surprising range of intellect and emotion. Despite Kennex's initial reluctance to work with Dorian, he soon discovers his new partner's value.

Together, Kennex and Dorian will fight the evil Insyndicate and discover what it means to be human.

"I think that the fun (is) working with someone who loves the 'what if' and is able to imagine situations and characters that make you laugh as much as it makes you squirm because the ideas are so close to what's possible," Abrams said of Wyman, who originally thought up "Almost Human." "On 'Fringe,' as crazy as things were - and it got pretty crazy - they were so often things that felt like, 'God, that just seems like something that might be happening right now.' Then almost invariably you'd read about something within weeks or months that proved that out. It's always been fun working with Joel, and 'Almost Human' is no different."

For Urban and Ealy - who, at times, have laugh-out-loud "buddy cop" banter - the project was attractive because of its writing. Though both have had success in film - Urban as cantankerous Dr. "Bones" McCoy in Abrams' "Star Trek" films, and Ealy with "Underworld: Awakening" - "Almost Human's" mix of action, sci-fi and humor was enough to draw them to television.

"For me, it was a multitude of things," Urban said. "Firstly, it was my relationship with J. J. Abrams and (Bad Robot partner) Bryan Burk. I had a fantastic time working with them on 'Star Trek.' When they approached me with this material, I read the pilot and was immediately drawn to the characters - the dynamic between the characters and the world. It seemed to me that what they were endeavoring to achieve was a fun, action-packed kind of buddy-cop show and do it in a way that, I think, hadn't quite been done before. So that really peaked my interest.

"From there I spoke to Joel Wyman, who was the creative genius behind 'Fringe.' I have to say I made an instant connection with Joel. He's a fun, smart creator. I was completely impressed with his vision for this world, these characters and the limitless possibilities of where we could take it. I felt like I would be kicking myself if I turned this down. So that's really kind of what drew me to the project."

"For me," Ealy said, "it started with that pilot script, which changed multiple times by the time we actually shot it, but each time it got better and better. From the first read, I was just highly impressed with this world - this level of writing. It never hurts to associate yourself with the J. J. Abrams camp. That definitely didn't hurt. But at the end of the day, for me, the opportunity to play a character like Dorian doesn't come along very often.

Abrams said, "The title 'Almost Human,' of course, applies to both Karl and Michael's characters. I think that the idea when Joel pitched it was always that Dorian, this synthetic cop, was in many ways more human than his partner."

Something else "Almost Human" has over other cop shows, Wyman said, is that it's "big and more popcorn-y."

"We thought it'd be really, really fun to have something that was really big and bombastic," he said.

With "Fringe," Wyman made a name for himself with a rich mythology. "Almost Human," he said, will be a little less threaded.

"The difference ... is that 'Fringe' had a mythology every week; that was the main thrust of it," he said. "Underneath it all, at least to me, it was a quintessential kidnapping story, and a show about a family that really is trying to hold it all together in a time where holding families together is really hard. People immediately gravitated toward that mythology. That was that.

"Not to say that there is not any mythology; there is definitely going to be some mythology. Inherently, this show is a week-to-week great action show with cases that you've never really seen before, or concepts that you have seen, but just told in very different ways, because of the nature of our program. That's how they're going to go.

"I'm always interested in hiding certain things and planting some things that will come around later, maybe in different ways than you first thought. That's it. But when you sit down to (watch) the show, what we're hoping is that you'll really be engaged by the compelling stories and these great characters, and go forward with them as they understand their place in the world."

The "Almost Human" two-night premiere begins Sunday at 8 p.m. on FOX. It continues Monday at 8 p.m. For more information on the show, visit http://www.fox.com/almost-human/.