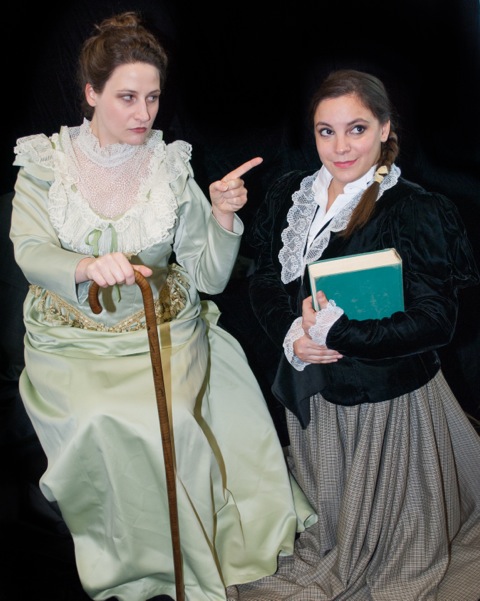 Most women remember either reading Louisa May Alcott's classic "Little Women" or seeing the movie version.

The semi-autobiographical novel focuses on the four March sisters - brassy, tomboy-like, aspiring writer Jo, romantic Meg, pretentious Amy, and kind-hearted Beth - learning the lessons of life, love, and heartbreak in the shadow of the Civil War.

Jessica Dows of Wheatfield, like many in the younger generation, remembers the movie/television versions. However, she's channeling the older generation in her role as Aunt March in The Niagara Regional Theatre Guild's new musical presentation of "Little Women" Nov. 8 through 24.

Dows' transformation into Aunt March is aided by the magic of stage makeup and whitening of her hair.

"I am channeling a character I saw in a movie - Lady Catherine de Bourgh (in the Colin Firth version of 'Pride and Prejudice')," she said.

Dows, a transplant from Pennsylvania, has been with NRTG since about 2008.

"It's a great theater company with a lot of really fantastic people, and they put on some great shows" she said. "We are all volunteers. We do it for the love of theater, but we definitely get the rewards through the audience's enjoyment."

"Little Women" will be presented at The Ellicott Creek Playhouse, 530 Ellicott Creek Road, Tonawanda. Performances are Friday and Saturday at 7:30 p.m. and Sunday at 3 p.m. Tickets are $18 or $16 for students and seniors or $15 presale. Call 716-260-2319 or go to NRTG's website, www.niagaratheatre.com, for reservations. Also, visit NRTG on Facebook.

An opening night reception including refreshments and a "Meet the Cast and Crew" will be held in the theater lobby following the Nov. 8 performance.

A special dinner theater option is offered for the Nov. 10 matinee with dinner immediately after the show at the Grapevine Restaurant (Niagara Falls Boulevard just down the street from the Playhouse). For $30, enjoy a choice of four entrees, coffee/tea/soda, dessert and this includes a ticket to the show.

•The Niagara Regional Theatre Guild will hold auditions for the comedy "You Can't Take It With You" Tuesday and Wednesday, Nov. 12 and 13, beginning at 7 p.m. at The Ellicott Creek Playhouse.

Pictured: Jessica Dows of Wheatfield, left, is playing Aunt March in the Niagara Regional Theatre Guild's production of "Little Women." She is shown rehearsing with Ashley Fratello, who plays Jo.