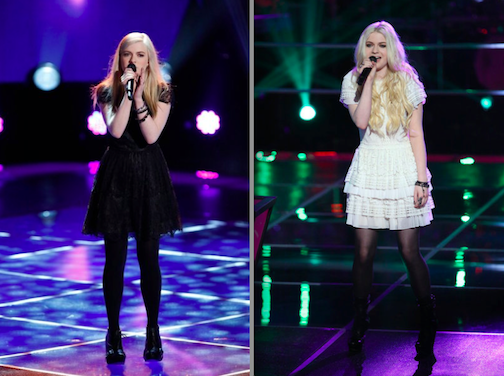 Holly Henry on "The Voice." (NBC photos by Tyler Golden)

'The Voice': Holly Henry has momentum heading into 'Knockouts'

Can a shy singer, whose preferred studio is her bedroom, win "The Voice?"

In the "Battle Rounds," she was paired with Cilla Chan for a rendition of Natalie Imbruglia's "Torn." Their coach, Blake Shelton, said he was looking for someone to rise to the occasion. When the duet-duel was over, he picked Holly.

"I'm not exactly sure (why he picked me), to be completely honest, because I'm not a pop singer, and I'd never sung that song in my life," Holly said in a phone interview. "And Cilla is much more of a pop singer than me, so, I mean, if it were up to me, I would probably have given it to Cilla, to be honest.

"But I think I just worked really hard on it and tried to, like, make it so that my style came through, because I can't, like, change to be a pop vocalist, you know? I just - it's something I can't really do. So I think maybe I just sing it in my own style."

The challenge was invaluable for Holly as she headed into the "Knockout" rounds, which will air this week.

"I guess it just gave me experience, because I had never done that before," she said. "I had never done a duet, and I'd never, like, shared the stage with somebody. I never even had a band, so I mean, I suppose it just prepared me."

All four coaches loved Holly's sultry voice in the blind audition, and each gave her an "I Want You" chair turn. But if she is to win "The Voice," Holly knows she'll have to work on her stage presence.

"Well, in general, since performing isn't really something I'm incredibly strong at, at least I wouldn't say so - I've never done it much - so stage presence is something that I definitely need to work on," she said. "I didn't really 'work the stage' (against Cilla). I don't know; I kind of just stand in one place and sing, so I should probably work on, like, having more of a stage presence."

Fortunately, Holly is gaining comfort - and confidence - with each performance.

"I'd say so," she said. "I still get incredibly nervous. But when I'm on the stage it's like I have no nerves, and that's kind of a new experience for me, because I've always been a very kind of shaky, nervous performer. But, yeah, I think it's definitely helped me out in that area."

One of the benefits of appearing on "The Voice," of course, is the opportunity to make fans. Holly said she enjoys chatting with the audience.

"I interact well with my fans and online in general, like a lot. That's kind of my hobby," she said. "I, like, run a blog and my Twitter is full of people at the moment. But, yes, I really like to interact with the (fans). Some of them are absolutely, literally insane, but a lot of them are incredibly good and supportive, and I feel really lucky to have the supporters that I do, to be honest."

Regardless of where she finishes on "The Voice," Holly, a Minneapolis girl, plans to make singing her thing.

"Yes, for sure," she said. "I feel like this whole experience has kind of opened my eyes to, like, the fact that I really like to do this, and it's something that I think I could just pursue and just have a time with, so for sure."

The "Knockout" rounds begin this week on "The Voice." The show airs Monday at 8 p.m. and Tuesday at 9 p.m. on NBC. Find more about the show online at www.nbc.com/the-voice.