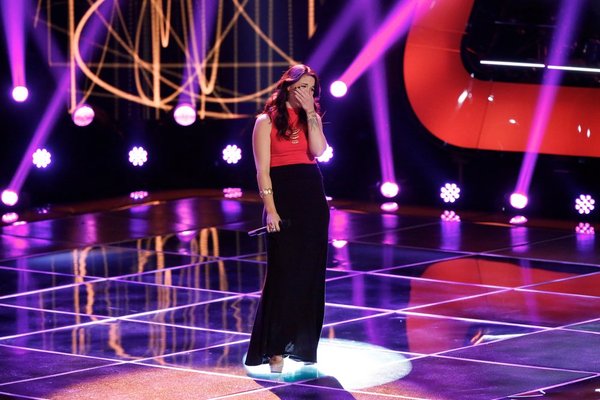 "The Voice" Grey performs at the blind auditions. (NBC photo by Tyler Golden)

Coaches: Grey 'has what it takes' to win 'The Voice'

"50 Shades of Grey" may be all the rage in Hollywood, but it only took one performance from Grey the singer to convince three coaches she can win season five of "The Voice." On the fifth and final night of the blind auditions, Grey's rendition of Kelly Clarkson's hit "Catch My Breath" drew "I Want You" chair turns from Adam Levine, CeeLo Green and Blake Shelton (who, in fact, turned a full 360 degrees).

The coaches fought hard for Grey, 25, a wedding singer originally from Jacksonville, Fla.

"You know what? My heart's pounding right now ... and this only happens every now and then, (when) I hear a voice that I truly think has what it takes to go on and win this thing. I believe in you already," Blake said.

CeeLo called her voice, among other things, "accommodating and warm and friendly. There was just enough of everything."

"I think your voice is perfect. That's why I turned around," he added.

Even Christina Aguilera, who didn't turn her chair, said, "The cool thing about you, which is gonna' work to your advantage during the competition is that, as the song kept going on, you kept getting better.

"Maybe I missed out, but, there's always 'Battle Rounds.' "

The remarks were welcome affirmations for Grey. Though she has performed since childhood, she has struggled to find a way to make a living as a full-time touring artist.

"I work in Boston. I'm a wedding singer. I've always kind of, you know, I've (sang pretty much in weddings) for a long time and, you know, my performance experience has pretty much just been that: a whole lot of weddings, a lot of unglamorous bars, and not the prettiest side," she said by phone.

Still, when the bright lights shined and the cameras rolled, Grey knew exactly what do to.

The singer, unlike some of her competitors on "The Voice," held steady once the coaches turned for her. That cool under fire, as much as her talent, swayed Adam.

"A unique ability that singers have, sometimes, is the ability to transcend the circumstances and kind of, like, be bigger and better when the pressure is really on. And so the fact that you've gotten through this and thrived, I would be thrilled and ecstatic to steal you away from these lovely guys ... because I think that you're extraordinary. I really do," he said.

That last pitch made the difference, as Grey selected the Grammy Award-winning pop-rock star.

"Picking Adam was kind of, like, a no-brainer at the end of the day for me," Grey said. "I love his coaching style. ... He has such an open mind. ... He wants to kind of grow with you and figure you out as an artist, too. ... And he just said things that resonated with me, and it was just a no-brainer to pick him."

Heading into "The Battle Rounds" (which were pre-taped and air this week), Grey said she had to rely on her life experiences. She attended the prestigious Berklee College of Music in Boston, but said that didn't help when it came time to square off with another Team Adam member.

"You know, Berklee is great, but I feel like I don't have any kind of advantage going in, just because I've had any kind of training like that," she said. "You know, this is a really scary time. It's a really exciting time but, you know, as a performer, like, we all have our strengths and we all have the things that we need to work on. And I think that, you know, it's kind of an unnatural situation. So we all handle it differently.

"You know, as far as, like, what's prepared me, I think it's just, you know, I constantly put myself in these uncomfortable situations. Like, I'm constantly auditioning for things, and I think the more you do that, the better you get at it, and the pressure seems to, you know, not, like, fade, but you kind of know what to expect going into it. But nothing can really prepare you for a battle on 'The Voice.' So it's pretty intense."

Grey has the talent to make it past "The Battle Rounds" and "The Knockouts." Beyond that, should she advance to the live rounds, she'll have one big advantage over the rest of the field: the most remarkable, easily remembered name.

"Oh, my gosh. Honestly, my last name is terrible," Grey said, laughing. "It's so long; it's Paluszynski and, you know, it just doesn't really roll of the tongue very well. And I don't know; I've always gone by Grey. My full name is Greylyn Paluszynski, but (Grey) just kind of stuck. I don't know. Everybody was, like, 'Yeah, that's a cool name. You should stick with that.' "

And for those who are wondering, "I don't think I'm Cher or Prince or any of those people!" Grey said.

"The Voice" airs Monday and Tuesday at 8 p.m. on NBC. Find more about the show online at http://www.nbc.com/the-voice.