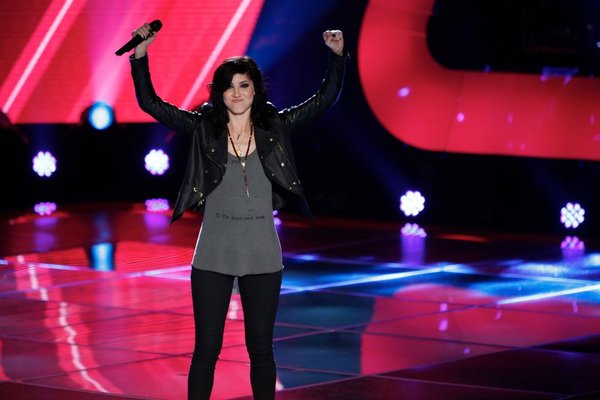 'The Voice': Briana Cuoco makes a 'Big Bang' of her own

As it turns out, "The Voice" can work just as well for a singer with good looks and a well-known name as it can for those vocalists without those advantages.

Briana Cuoco entered season five of NBC's "The Voice" with a fresh look and a famous sister, "The Big Bang Theory's" Kaley Cuoco. But just like every other competitor, Briana sought to be judged solely on her singing ability.

"Yes, for sure. I mean, I think people automatically think that because my sister is successful in one field of the business that I automatically have an in," she said by phone. As it turns out, her last name has made a music career more challenging than one might expect.

"I am incredibly lucky to have (Kaley), and have her support, and have been around the business for a long time. So I have that on my side, absolutely. But on the other side, I do have ... more pressure on me. I think people expect a little bit more because of that, which is a great thing, because it keeps me driven, but it also can be a little harder sometimes when people are a little extra critical sometimes, in certain cases."

Fortunately for Briana, 24, coaches Adam Levine, CeeLo Green, Christina Aguilera and Blake Shelton couldn't tell what she looked like, or what family she came from, when she participated in the "The Voice's" blind auditions.

Following Briana's rendition of Lady Gaga's "You and I," the singer netted "I Want You" chair turns from both Christina and CeeLo.

"Sometimes you are sitting in the seat and you're struck by the subtleness of a vocal, and then sometimes you're just moved by power and raw talent," Christina told Briana. "I really enjoyed it.

"It's hard to get up there," Christina said. "You've got your nerves going; all this stuff. And you held out those notes really, really strong. You made me very happy."

"I felt that same power in your voice that Christina described it as so eloquently, and I want to be closer to it, as well," CeeLo said.

Ultimately, Briana opted to go with Christina, shouting "Girl power" as she moved to embrace her new coach.

Now, having made it on the show based on her voice, Briana can rely on Kaley to generate a few more fan votes.

"I think now it's the best of both worlds, because I get her on my side as well," Briana said.

As the singer moves into "The Battle Rounds," Briana said audiences would see more of who she is as an artist.

"I hope as it progresses there's a bit of a growth," she said. "I mean, I certainly didn't think my final audition was the best performance of my life singing, so I hope the audience can see growth and see that my voice gets stronger. ... But I can perform a song and tell a story in a song. And, yes, I sing some old-school stuff and some soul and blues and I'm really excited."

"The Voice" airs Mondays and Tuesdays on NBC. Learn more about the show at http://www.nbc.com/the-voice/.