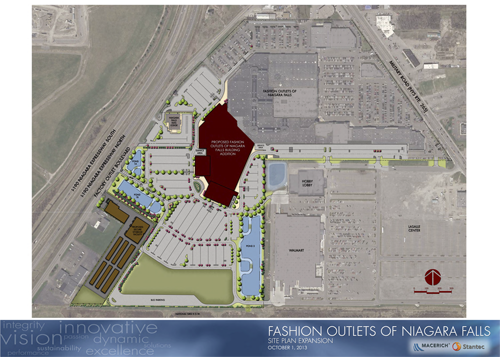 Fashion Outlets expansion is a go

The Town of Niagara Town Board on Tuesday jubilantly gave final approval for the expansion of Fashion Outlets of Niagara.

The board approved several resolutions regarding the expansion, including the site plan, needed rezoning and subdivision, and the negative environmental impact statement for the State Environmental Quality Review Act.

Doug Morrow, vice president of development for Macerich Partnership, mall owners, expects to have shovels in the ground immediately, probably starting with remediation work at the former Sabre Park site. They are looking for a fall 2014 completion date for the project.

About 82 percent of store leases are either out or in negotiation, Morrow said, adding that he plans to start announcing the names of major tenants in the first quarter of 2014.

"We're very excited and happy to be in this community," he said, grateful for the assistance of Supervisor Steve Richards, the Town Board, the town's planning and zoning boards, the county and State Sen. George Maziarz to bring the expansion together. "We're looking forward to bringing new and exciting things to Fashion Outlets of Niagara."

"This is the largest expansion of a private business in our town in my lifetime," said Richards of the project that is expected to cost roughly $90 million by the time it is completed. "We're blessed to have them in our town."

Richards noted that taxes in the town were expected to go down under his proposed 2014 budget now being studied by the Town Board, but if the mall expansion was already done today, he estimated taxes could be lowered by an additional $1.37 per $1,000 assessed value.

He added that the expansion will mean a boost to other existing businesses and restaurants along Military Road's "golden triangle," as well as correct the drainage problems in that area of town.

Several representatives of local construction workers spoke prior to the meeting in favor of the project.

"We're ready to go," said Jeff Salvatore, chief estimator for Mark Cerrone Inc. After a year working with the California-based Macerich, Salvatore said, "One thing we've learned about Macerich is they're all about giving back to the community."

Russ Quarantillo, business manager, and Dave Naus, president, of IBEW Local 237, both commented on new jobs the expansion will bring and noted that their wives and kids can't wait to shop at the new stores.

Town Board members were equally enthusiastic about the project and cited not only the construction jobs the project will bring, but the full- and part-time jobs that will result when the project is completed.

"It's nice to see that at least at a local level of government we're helping create jobs," said Councilman Rob Clark.

The mall expansion describes the phrase "win-win situation," said Councilman Danny Sklarski. "It's a great project. The Town of Niagara welcomes you with open arms, and Niagara County welcomes you," he said.

Morrow said the expansion will result in about 164 full-time retail jobs and roughly 458 part-time jobs. In three years, he expects Fashion Outlets of Niagara to provide a total of 2,500 jobs.

Based on suggestions by Richards, Macerich has added several improvements to the project to ease traffic congestion, including new stoplights and a turning lane on Military Road, plus from two to five interior connection points between Factory Outlets and the Benderson Development-owned Walmart area. The connection points will allow shoppers to go between the two without going out on Military Road or Fashion Outlets Boulevard.