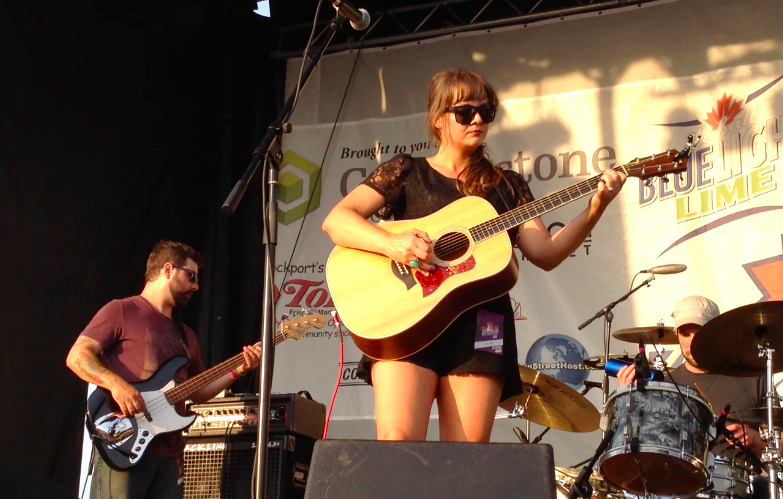 Stacy Clark performs in Lockport in this 2012 photo.

The feeling of a red carpet beneath the feet of a Grand Islander is simply as foreign as the feeling of the lunar surface. To put it bluntly, the limelight does not shine on the Island; it would rather shine on the international music centers of the nation - like Nashville or Los Angeles - to find the next big music star.

That is, until Stacy Clark arrived.

Clark, who is an Island native, has launched her music career beyond "sky's the limit" and into stardom. In her rise to the top, Clark has performed with or opened for Jack's Mannequin, The Plain White T's, The Bird And The Bee, Kate Nash, The New Amsterdams, Joshua Radin, Matt Nathanson, A Fine Frenzy and Leigh Nash. Clark's music is self-described as, "a combination of singer/songwriter, folk, rock and electronic mix."

Even in the starlight, Clark hasn't forgotten where she came from. "I have learned it is rare to still be friends with the girls I grew up riding the school bus with. I truly value this and am proud to be from Grand Island. It is such a unique small town, and provided me a great foundation for success through building my self-confidence," she said.

Now, Clark didn't simply just float to the top overnight. She has spent years perfecting her craft, and just as much time working hard to get her music heard.

"I started recording albums back in 1998 before there was GarageBand - a time when you had to intern at a recording studio or work multiple jobs just to fund your first record. ... Prior to these past four years, I had to work full-time on top of the music hustle. There were times I wasn't sure I could have the strength to keep going. I didn't want to give up, but also I was physically and emotionally run down."

Clark's career, while rewarding, has been just as unpredictable as one should expect in the music industry. She has weathered through the highlights and hard times, taking both success and rejection in stride.

"Even when you have a song that sells a lot on iTunes and people find catchy, there is no guarantee that it will break on radio. I have done radio tours and have gotten plays in the past. Sometimes just when you think you're at the point your music can break - to me, this means getting a hit song on the radio - it can fall short. Unfortunately, there is not much as a musician you can do about this. That part is out of your hands. ... There is a lot of rejection in this industry. It used to get me down. Now I have changed my outlook. If you're not getting rejected, you are not trying hard enough. You just have to dig deep and always keep the ball rolling."

Thanks to unrelenting hard work, Clark has produced and toured the country behind albums "Patterns," "Connect the Dots" and "Apples and Oranges."

Clark's recent efforts have produced a new EP, "Days Into Nights," of which the singer/songwriter is particularly fond. The four-song sampler includes three new tracks and a collaboration with Jack's Mannequin frontman Andrew McMahon.

Whatever the future may hold for this rising star, it appears Clark will be without regret.

"No matter what career in life you choose, there will be hard work and sacrifice, so you may as well spend your time going after something you love," she said.

Stacy Clark is online at http://www.stacyclark.net/.Click here to find and purchase "Days Into Nights."