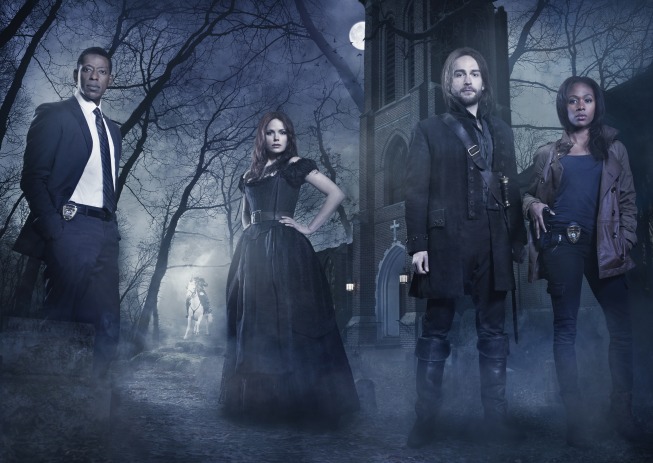 'Sleepy Hollow' is a blast from the past - literally

Hollywood super-producers Alex Kurtzman and Roberto Orci are on quite the nostalgia kick.

Over the past five years, they've given new life to iconic characters Capt. Kirk, Optimus Prime, Steve McGarrett and Peter Parker, bringing each into modern times.

Now, they're going one step further. Instead of reinventing classic characters, they're literally transporting them from the past into the present.

In "Sleepy Hollow," Kurtzman and Orci have taken the legendary Ichabod Crane and his nemesis, the Headless Horseman, and brought them across two-and-a-half centuries of time.

"So many of the stories that interest us tend to be timeless stories," Kurtzman said. "They have existed and continued in different iterations over many generations, because they say something enduring about the world that we live in, and about who we are. 'Sleepy Hollow,' particularly, was exciting to us because, speaking personally, Halloween is my favorite holiday. My house is basically like a Halloween 365 days a year with my son. And so the idea of getting to live in that kind of world and getting to live in that kind of universe is just sort of delicious, conceptually. Bob and I are really excited by the idea of getting to fuse the horror genre with a cop procedural, which is such a staple of television, and bring kind of a new spin to it, because we also get to tell much of our story in the past. So, on top of the cases of the week, the solutions to the modern day story is to look to the past, and the idea being that if you don't learn from the past, you're doomed to repeat it. So, we get to do flashbacks, we get to tell stories over different centuries, and I think anybody who loves genre would feel that delicious prospect."

When the Headless Horseman shows up in 2013 Sleepy Hollow, Ichabod Crane is called upon to help Det. Abbie Mills (Nicole Beharie) and Capt. Frank Irving (Orlando Jones) save the day. What they find is an ominous connection to the past.

As they did with their recent FOX sci-fi series "Fringe," Kurtzman and Orci opted to bring in fresh talent instead of casting the biggest names available.

"Because it is kind of a famous short story, but it is a short story with 17 pages, to answer what you were saying earlier about adapting something, it had never been done modern day. So we came to the conclusion that we wanted you to meet these characters as though you had never met them before, and let them take you into this world without any previous association," Orci said. "So it was nice to discover a couple of fresh faces, who have obviously built a fandom of their own, but who are not really as widely recognized in television. When you do that, you really get into their characters in a way that maybe you don't if you've seen them play something else that you were super familiar with before.

"In the case of Tom Mison (Ichabod Crane), the idea of, originally we were not necessarily going to go for an English actor, but when we met him and saw him read, we realized that actually in the day of the Revolutionary War many of the folks fighting for revolution and for the independence of this country may have been recently arrived from the U.K. So the idea that this man with an eloquent accent is actually one of the first Americans who fought and almost died for this country was fascinating. The idea of someone with Tom's intelligence, seeing what the country has become, both in all of its glory and also in some things that maybe are shocking to him from what he was expecting back in the day, just seemed like a very interesting thing. Tom is just - it's a tricky part. It's got to have a sense of humor, but it's got to be smart. He can't just be going around marveling at every new thing that he sees. He's got to play his cards close to his vest, so he doesn't seem like he is totally out of time. He's trying to fit in, and he has the intelligence to do so, and so Tom is great for that.

"And, Nicole (Det. Abbie Mills), you have a really strong woman, who when you are playing a detective, particularly as a woman, you either are going to embrace the fact that it's kind of a man's world you are jumping into, or you're going to ignore it. With Nicole, we are able to actually play the complexity of a little bit of an underdog, who is able to keep her own - she's able to hold her own around her peers, and who, in meeting Ichabod Crane, in Tom Mison, has a sympathy and a connection to a guy who everyone else thinks is crazy, because she, herself, has sometimes been an outsider. And yet, she is still able to keep a skepticism and a groundedness that is so key to the show, because the show is attempting to portray some pretty nutty stuff.

"And so, Nicole brings an earthy point of view to it that allows you to see the thing through her eyes and enjoy it without letting yourself go nuts, and without forgetting that, 'OK, I want to make sure these things are playing to me correctly or I'm not going to believe them.' Nicole plays that beautifully."

"Sleepy Hollow" debuts tonight and airs each Monday at 9 p.m. on FOX. Find more about the show online at http://www.fox.com/sleepy-hollow/.