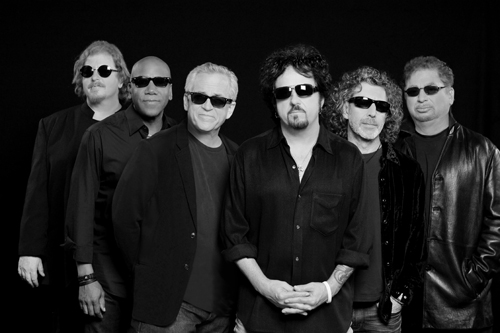 As it turns out, the Rock and Roll Hall of Fame isn't in Cleveland.

It's on the Toto tour bus.

Keyboardist David Paich has written songs recorded by Cher and Chicago, arranged and/or played with Neil Diamond, Jackson Browne, Stevie Nicks, the Doobie Brothers, Heart, Foreigner and Elton John. Oh, and he was a producer for a young upstart named Aretha Franklin.

Luke played guitar on Michael Jackson's "Beat It," while Toto wrote, arranged and served as house band on the "King of Pop's" hit song "Human Nature."

If that's not enough, Toto management estimates, "the band members' imprint can be heard on an astonishing 5,000 albums that together amass a sales history of a half a billion albums. ... It is not an exaggeration to estimate that 95 percent of the world's population has heard a performance by a member of Toto."

So, if Toto members' music is everywhere, why isn't Toto, for lack of two better words, more famous? Luke said it's partly because band members - session musicians at heart - enjoy anonymity. It's also because Toto could care less about what music critics think, and have never "played the room" to score press points.

"It's kind of funny," Luke said. "The mainstream rock press kind of looks at us like we're some one-hit wonder from the '80s and we haven't contributed anything to music. They just hate the fact that we actually did all this. They don't even want to acknowledge it.

"We're not trying to change the world, man. We're just a bunch of guys who love to play together."

Toto, Luke said, has never made it easy for writers to categorize their music.

"Too rock for jazz; too jazz for rock. Too funky for this, or too pop. And then it's prog music. And there's eight different singers, because everybody sings and we've had different guys. It confuses people," he said. "We're not an image band. We never were."

For Toto, success ultimately comes down to two things: the work and the fans.

"We had to be really good players to make it," Luke said. "And I still believe in that - that work ethic. And I still practice every day - even if it's just for me. Sometimes I practice what not to play. ... You have to pay the dues. You can't skip over the middle part - the hard part - if you want to have a long career and you want to be good at something. No matter what it is."

"You've got to play to your audience," Luke added. "I don't care what Rolling Stone magazine thinks of me. It's laughable. I care about what the fans who buy our records and have followed us, if they have a criticism."

While the members of Toto have found success as individuals, they've also scored hits together. Most notably, the band registered chart-toppers "Hold the Line" (No. 5), "Rosanna" (No. 2), "I Won't Hold You Back" (No. 10) and the iconic, often-sampled "Africa" (No. 1).

"Honestly, our most successful records were the ones where we just said, 'We're going to do what we want to do,' " Luke said. "I mean, I swear to God, when I heard 'Africa,' I went, like, 'This is never going to be a hit song. Come on man. Really? What does that mean?' But it was an interesting record."

"We just kind of made the studio our sandbox and just kind of went out there and played," he added. "And we had fun with it. ... Sometimes a particular song touches a nerve. And that was one of those."

Toto is performing Aug. 23-24 at Niagara Fallsview Casino in Niagara Falls, Ontario. They will share the stage with another music legend and fellow Grammy Award winner, Michael McDonald.

And, yes, they've worked with him in the past, too.

"Michael and us, we go way, way, way back," Luke said. "At one point, he was asked to be the original singer in Toto, because he was in Steely Dan with Jeff Porcaro. So, they were all old friends. But he had just joined the Doobie Brothers.

"So, we've had this long connection. We've worked with Michael on his first solo albums. We all played together. He sang on some of our old records. We're really just old friends. And then somebody thought it would a great idea to put us together."

Tickets for the concert start at $60. For more information, visit http://www.fallsviewcasinoresort.com.

Toto is online at http://www.totoofficial.com.