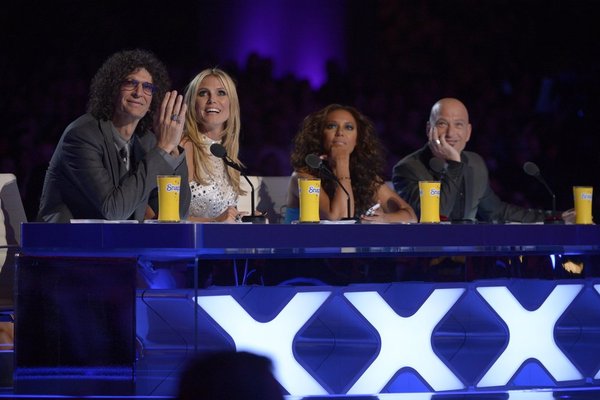 Heidi Klum, Mel B talk pros and cons of trying your hand in front of millions

At the recent Television Critics Association summer press tour, the coaches on "The Voice" took flak that their show has yet to produce a top star in the music industry.

Last fall, "The X Factor" received more attention for its rotating cast of judges than for its contestants.

"American Idol," in Simon Cowell's final two years, was criticized when its champions failed to muster a fraction of the commercial success the show's early winners received.

So, is there value in participating in these shows, or do these shows only benefit the celebrity mentors, and the networks that air them?

For "America's Got Talent" judges Mel B and Heidi Klum, the answer is a simple "Yes," at least when it comes to their show.

"Oh my god, they get exposure to 15 million people each week, and they get to experience performing in front of 6,000 people right there live, and the, a whole, you know, (mass of) people watching at home," Mel B said. "They get complete exposure, and they get an experience of what it actually takes to perform live and deliver."

"AGT," unlike "The Voice," "The X Factor" and "American Idol," produces stars in multiple areas of the entertainment industry. It's not just singers and bands, but magicians, dancers, dog trainers and ventriloquists, too. "AGT" acts, while not selling records, per se - though many do - find steady work in Las Vegas and other live entertainment hot spots.

Klum said TV talent shows provide a means for participants to find out if a career in show business is viable or not. Plus, she said, these shows are good, old-fashioned fun for viewers at home.

"Well, I think also it's good to see how many talented people are out there in the world that we never see and know about, you know?" she said. "There's, you know, someone, you know, maybe in your office that you would, you know, that all of a sudden have these hidden talents and, all of a sudden, they're standing in line for 'America's Got Talent,' and then you're like, 'What? I never knew that you could juggle with 15 balls,' or something like that.

"I think that there are so many people out there and it's a platform for them to show how good they are, and you just never know. Maybe one of them will win that million dollars and go to Vegas, and you just have to be in it to win it. And, yes, there is every year all these dreamers and people that think that they're really good, and you know, at the end of the day, everyone gets to be put in their place in terms of how good their talent is, you know, next to someone who is maybe better, and the next one who is even better.

"You know, so I think it's good. I think it's great for everyone to have that opportunity to be seen by, you know, millions of people, and ultimately, America will vote who they think is the best out of all these people."

Ultimately, whether these talent shows benefit the talent, or the talent seekers, Klum said it's up to each participant to forge his or her own path.

"Well, at the end of the day, it's always up to you to continue, you know, or not," she said. "You know, for example, when I (judge) 'Top Model,' I tell the girls all the time, 'Pack your bags and go to either Paris, go to New York, and really be in a place where, you know, you have to be in order to be a model. You can't win 'Germany's Next Top Model' and go back to your small town, sit by the phone, and think something's going to happen.'

"You know, you invite all these designers, and who comes? He does. You know? So I think that it's up to you at the end of the day that, even if you win or you're second runner-up or whatever, you are making your destiny. I think that we can only push someone forward and out there, but ultimately it's up to them to keep it going and put yourself out there and be professional and do it."

"America's Got Talent" continues its search for new stars when it continues Tuesday at 9 p.m. and Wednesday and Thursday at 8 p.m. on NBC.