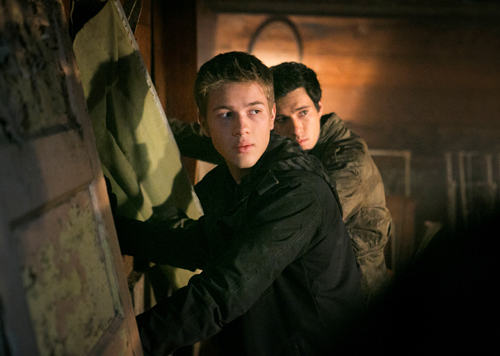 The average 19-year-old spends his summer hanging out with friends, working a menial job and preparing to return to college.

He spent his summer traveling through parts of Europe and Japan before participating in a Comic-Con panel discussion on "Falling Skies," and preparing to return to Vancouver to shoot season three of his hit TNT sci-fi series.

"Every kid has dreams, and aspirations and grandiose images of the future, but I didn't specifically image this," Jessup said in a phone interview. "When I was younger, before I became an actor, I thought I would become a doctor or a scientist or something. And then when I became an actor - I started when I was 11 - for the first few years, I loved it because I never saw it as, 'This is my career.' That wasn't the mindset. When I really started thinking about it that way was when this stuff started happening. So I didn't exactly have time to dream specific dreams. But it's very nice. It's appreciated."

Jessup is grateful he found his way onto a successful show, and that he gets a third year of bringing his character, Ben Mason, to life each Sunday night. Few TV programs these days make it to a third season. A ScreenRant.com report showed 65 percent of all new broadcast shows (2009-12) failed to earn even a second year.

"It's exciting," Jessup said of a third season of "Falling Skies." "I haven't read anything; I don't know anything about the new season. It's as much a mystery to me as it is to anyone else. It's very exciting to see where they're going to take the character. That aside, there is something, in general, fun and exciting about getting to play the same character for such a long period of time because it becomes, I don't want to say second-nature, but something like that. You know the character; you've done all the work, and the work's built in over time."

"With a character in TV, you have to find a beginning, middle and an end every episode, in every season, and in general," he added. "That is a meta-exciting multi-layered challenge that really only exists in TV. So, the more seasons we get, the more interesting it gets. I'm excited. I'm really excited."

Though "Falling Skies" has made several significant changes in two seasons, the show continues to be a stable peg in TNT's lineup.

"It's certainly - especially in this current season we're in - it's gone in a more sci-fi direction," Jessup said. "There's a lot of moving parts. We have talking aliens. We have relatively complex terminology and mythology. There is different types of alien. You know, giant ray guns. There's a lot of sci-fi.

"At the beginning of the show, in the pilot and part of the first season, there was only one type of alien - skitters - and they didn't have names. Their objectives were unclear. They were sort of the distant, faceless enemy. That's, obviously, very, very different from the way it is now. The focus then was on human nature; human conflict; American Revolution parallels. So, it has evolved over time, as we've added more characters and added more plot elements and added more to the mythology. In that way, the scope has widened."

Jessup has found that sci-fi fans, once they've latched onto a program, will fiercely follow the story and characters.

"They've been really great," he said. "Because I don't live in the U.S., I don't get a lot of direct interaction, unfortunately, except for things like Comic-Con. But a lot of stuff online; I've found some very nice messages and letters - not just to me, but also to the show in general.

"I've noticed that sci-fi fans tend to really, really support the shows that they like. They tweet it out nonstop; they write about it nonstop; they set up blogs and websites and chat boards. They're really passionate.

Jessup said it's hard to get a gauge on what works and what doesn't when you're on set. However, once production wraps and episodes air, "These fans get so excited. It's really rewarding and it makes it all worth it," he said. "It humbles you, because you remember that you're doing your job not just for yourself, but for other people. Because other people enjoy it. And they're the ones who, in the long run, pay my paycheck. So, I am very, very happy that they like our show."

The season finale of "Falling Skies" airs Sunday at 10 p.m. on TNT. Find more about the show online at www.fallingskies.com.

WATCH A PREVIEW OF THE FINALE: