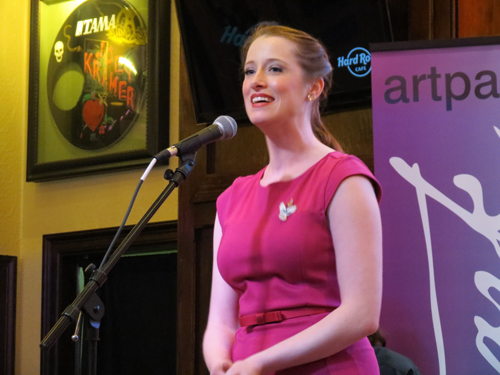 While many actors have made return appearances to the Artpark stage in recent years, in my mind there's just a handful who have stood out as master performers.

Michael Hunsaker and Nikki Renee Daniels were wonderful in "Aida." Their sublime on-stage chemistry, in my opinion, completely transformed Artpark's theater program in 2007. He memorably returned in 2008 as the Beast in "Beauty and the Beast," and she took a turn as the narrator in 2009's "Joseph and the Amazing Technicolor Dreamcoat."

Glenn Lawrence was dastardly and vain as Gaston in "Beauty and the Beast," and then pulled off a top-notch Elvis impersonation as Pharaoh in "Joseph."

To this list of all-stars, I'm adding Emilie Renier, who plays Maria in "The Sound of Music," which opened Thursday.

Renier was a perfect fit last season as Cinderella. She offered the right mix of girl-next-door and Disney princess.

This time around, in "The Sound of Music," she steals each and every scene she's in - to the point that, when she was off stage, I wondered when she would return. As in, "Yeah, yeah, this is great; now bring Maria back."

Randall Kramer, who directed Renier both years, said, "We certainly didn't think about this show and say, 'Oh, well, Emilie would be (perfect). Let's do "Sound of Music" because Emilie can do Maria.' But that said, I don't know anybody who would be any better."

Theatergoers will likely have that Julie Andrews template in mind when they visit Artpark. Fortunately, they'll have no trouble rooting for Renier.

"You know, really, Cinderella and Maria in 'The Sound of Music' are really two perfect roles for Emilie," Kramer said. "They both require an innocence, a sincerity, but also there's an energy that they both need to have, and Emilie has all of that. I mean just naturally she has all of that."

Renier said performance art is in her blood.

"My mom was an actress. When she started having kids, she totally stopped acting and became a full-time mom," she explained. "It was always kind of in our family. I grew up listening to show tunes and doing theater. When I moved to Pennsylvania, I got involved with a theater called Prather Entertainment Group. They cast me in a lot of shows, and I learned a lot through that. And then I went to school for music theater at Elon University, where I met Lynne Formato and learned about Artpark, and eventually auditioned for Artpark at Elon."

Renier is one of many Elon University students Artpark has cast in recent years. The North Carolina college has become a go-to source of talent for Kramer and his team (including Formato, who is on staff at Elon).

"It's a fairly new program," Renier said. "They just are really dedicated to bringing in the top-notch teachers - and master class teachers - and they bring in people from New York all the time. And we're really heavily trained in dance. We take dance classes along with the dance majors, and acting with the acting majors, and voice lessons with the voice majors.

"We are also very lucky that the higher-ups in the school - like the president and all of that - they completely support our department, which is really not something you find in the arts. Every single one of the productions, the president is there at a performance - if not a dress rehearsal. (It's) just incredible to have their support and their financial backing."

"Over the past five, 10 years, it's just really become a name in New York City, which is incredible," she said. "It's definitely a place I'm proud to be from."

"That program has really taken off," Kramer noted. "We see 60, 70 of their students when we go up to audition. And we normally are only auditioning for maybe anywhere from half-a-dozen to maybe 10 roles in ensembles.

"The training is rigorous. They're triple-threats. It's everything that you want at Artpark. You want people who can sing, dance and act."

In her first time working at Artpark, Renier was tasked with carrying "Cinderella."

"It was awesome. It was really great, because the cast was incredible," she said. "The thing about that, yes, a lot of the lines and the songs fall on Cinderella, but the ensemble's in so much of that show. And they were just incredible in terms of creating the environment and the scenery and the feel of the show. It wouldn't have been the same without them.

"I got to wear a ball gown and talk to the kids afterward," Renier said. "Kids are so incredible, because they completely believe in whatever's up there on stage. They really thought I was Cinderella.

"It was just what every girl dreams of. It was ... something I'll remember for the rest of my life, honestly."

"I love - love, love, love - the production team that they have here," she said. "Randy, who is our director, and Lynne, who's the choreographer, everyone down to stage management and Susan, who's our company manager, they're just incredible, and you will never meet a better group of people."

Renier was drawn to "The Sound of Music," she said, because "it was based on a true story, which I always find interesting. I kind of like delving into the history part of a show.

"I also love the music in this show, particularly the music that the nuns sing - which is funny, because I don't sing any of that. But it is just gorgeous. Especially the way the show opens. You could not find a more ethereal moment in one of the classic musicals. It's really beautiful."

Speaking of Maria, Renier said, "She's fun, and it's actually been fun in this process because she's kind of a tomboy in a lot of ways.

"There's a song in the show called ('Maria'), and they talk about how she's always getting bumps and bruises and scraping her knee. And she's always late for everything, except for mealtime, because she's always hungry. And she loves to sing.

"She, in many ways, is the opposite of the really strict and regimented nun's life. She's kind of a free spirit, which has really been fun, because, no matter what character you do, you find little ways and little things that are little bits of you in the character.

"Through working with Randy and Lynne and everybody, I've actually found that she's much closer to me than I thought she was, which has been really fun."

"I came and I saw 'Fame' a couple years ago, and I was really impressed with the production because 'Fame' is, I mean it's a great show, but it's by no means an in-depth show. It's just fun. But I was impressed with how in-depth they were able to make it," she said. "And then 'Cinderella,' of course, last year, the sets and the costumes were just incredible."

"The way it comes off to me, they don't nickel and dime; they do what they need to do, which is real exciting because you don't find that that often now, because musical theater is really expensive," she said. "It's really fun to be part of this company again."

"It really comes down to George Osborne, the producer/executive director," he said. "George has made a conscious effort to put more resources into the musical every year."

Hopefully, he'll lend some of those resources to bringing Renier back for a third time next year.