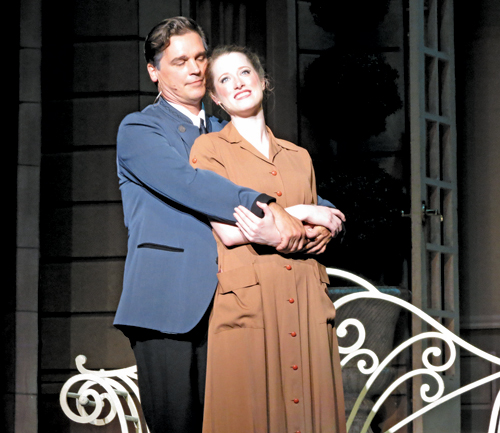 The Captain and Maria (Paul Todaro and Emilie Renier) share a moment together in "The Sound of Music."

Artpark: 'The Sound of Music' outweighs the need for interpretation

Raise your hand if you guessed Artpark's summer musical would feature a cluster of children singing beneath a Nazi flag.

Anyone? No? Me, neither.

Theatergoers at the Lewiston venue watching "The Sound of Music" this weekend, especially those who've never seen the movie or stage show, may experience a sudden onset of head-scratching, or an uncontrollable urge to ask, out loud, "What just happened?"

You see, "SOM" begins with a father reconnecting with his children and unexpectedly finding true love. ... And it ends with him fleeing from the Nazis ... over a mountain ... into Switzerland.

The story, though somewhat historically accurate, is still just plain odd. The Nazi element, which is hardly touched upon in Act I, is all of a sudden a driving force in Act II (and explained in song, to boot).

Nevertheless, smart money says these same audience members will overlook what the New York Times, in 1965, described as "the hopeless pretense of reality." They'll do this because, storyline notwithstanding, Artpark's version of "SOM" is fun to watch.

Put another way, a grown-up Cinderella teaching a band of tiny-tots how to sing some of the most well-known songs of all time trumps the need to understand how each plot point ties together.

These junior thespians, whom I expect range in age from about 8 up to college student, are right on the mark. They know their lines, they sing well, and they have comedic timing.

Paul Todaro, who plays the Austrian family patriarch, is worth rooting for, too. His Georg starts out every bit the demanding captain - literally using a whistle to sound out orders to the members of his household. But as the show unfolds, Georg begins to see his children as just that - children - and not as young soldiers.

Even the self-serving Max (actor David Autovino) has his fair share of likeable moments. His accent is delightfully over-the-top, and often masks his shadier side.

Also in the cast's favor: The performances of Rodgers & Hammerstein's iconic numbers "My Favorite Things," "Do-Re-Mi," "Sixteen Going on Seventeen," "So Long, Farewell" and, of course, "The Sound of Music," are spot on.

If there is, in fact, an issue with the storyline, there is no questioning the "SOM" cast. It's not their fault the show takes an unexpected left turn. They are masterful with the material they were given.

Ultimately, if you want to figure something out, or decipher how all the pieces fit together, I suggest you find a good game of "Tetris." If you want to be entertained, and you're a fan of musicals, then "The Sound of Music" will be music to your ears.