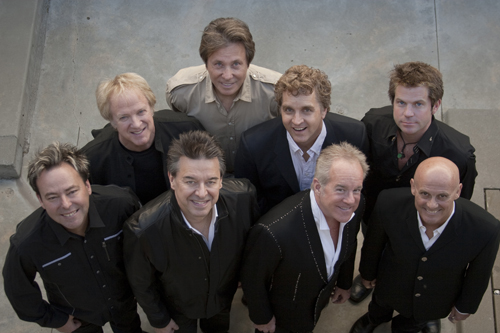 Music has become a game of numbers for legendary Illinois-bred band Chicago.

The same can't be said for the band members in Chicago.

Forty-six is the number of consecutive years Chicago has toured. While other acts might look to slow things down after 40-plus years, these band members are far from road-weary and eagerly anticipate each gig.

"Perhaps people are thinking, 'Well, how many more years are they going to want to do this? Maybe we should catch this show, because we don't know,' " said James Pankow, one of the founding members of Chicago. "You know, Elvis is gone. Frank Sinatra's gone. I never saw either one of them, and I regret it. And maybe people are kinda starting to think that way about Chicago. I mean, this is 46 years."

However, the renowned trombonist said Chicago "is absolutely slamming."

"We are at the top of our game. I don't see any end in sight," he said. "We haven't done a farewell tour like so many people do, because we truly are not ready to say farewell yet. We're still slamming. The band is just really playing well. This current lineup is just really terrific."

One hundred and fifty minutes, or two-and-a-half hours, is about how long "An Evening with Chicago" will last June 25, when the band headlines "Tuesday in the Park" at Artpark.

"You close your eyes at a show, and you are hearing the record on steroids," he said. "You're hearing the record, as you've heard it for years, I mean, blown up. In stereo. In your face. Everybody on stage is performing their parts. This is the old-fashioned way. These are talented, real-deal musicians. ... The crowd is going to get the real thing. This isn't lip-synching; this isn't smoke and mirrors. ... When people leave that show, it's like they have been 'Chicago-ized.' "

While 150 minutes may seem like a reasonable amount of time to perform a catalog of songs, it's not nearly long enough for Chicago.

"When you look at the legacy over all these years, if we did all of the hits, we'd be on stage for six hours," Pankow said.

Which brings us to our next numbers.

Chicago has released 34 albums, which, collectively, have sold 100 million copies thanks to 21 Top 10 hit songs.

This, of course, is a good thing - a proud accomplishment for any band. But it also presents something of a challenge.

"It's a jam-packed show," Pankow said, but, "every year it becomes difficult to (say), 'OK, what songs can we maybe bring into the fold that we haven't done for a while to freshen things up - what songs do we have to leave in the show so they don't throw tomatoes?' Because there are some of those songs that people expect to hear, like 'You're the Inspiration,' 'Saturday in the Park,' '25 or 6 to 4,' 'Colour My World.' ... So, there are songs that you pretty much keep in the show no matter what kind of approach you take."

Zero is the number of record executives Pankow and his bandmates report to these days. That freedom is motivating Chicago to think up and record new songs.

"The writing process is ongoing, as we speak," he said. "We're crafting new material. I'm arranging horns and writing songs of my own. We've already got several tracks almost ready to go.

"It's great to be able to do this in a completely new world. We're not working with a record company in the old, traditional way. The record companies - that business is over. The new record company is the Internet. We are the label. But we are uncensored. We don't have a suit standing over us going, 'I want another "If You Leave Me Now"; I want another "You're the Inspiration." '

"It's like the old days. We are uncensored. We can do anything we want to do, and I'm hearing some really adventurous stuff. It's really cool to be able to just go no-holds-barred and write what we feel without being dictated to by a label - because we are the label."

"Yes, people will be hearing adventurous Chicago material in the months to come," Pankow said.

Chicago isn't quite ready to unleash new songs live in concert, but fans should expect to hear new music in the next 12 months.

"At some point, yes, we will bring new material into the show," he said. "But we'd like to put it out there and, if you will, kind of let people get an inkling of it before we start performing it."

Pankow said that would make the songs more relevant when fans hear them in concert.

"Once this new material is out there, and people have a chance to hear what we're creating ... you know, we'll be excited to bring it into the show," he said. "You can't just sit on the laurels of the past. That's all good stuff; that's what brought you to the dance. I mean, songs like 'Saturday in the Park,' '25 or 6 to 4,' those songs made it possible to do what we do, and to be around all these years. But those songs were new songs once.

"So, we want to bring more of those into the fold, and we will. You know, you can't just do the same old. We're constantly trying to challenge (ourselves). That's how you keep the edge sharp."

Chicago performs Tuesday at 6:30 p.m. at Artpark in Lewiston. As it's "An Evening with Chicago," there is no opening act.