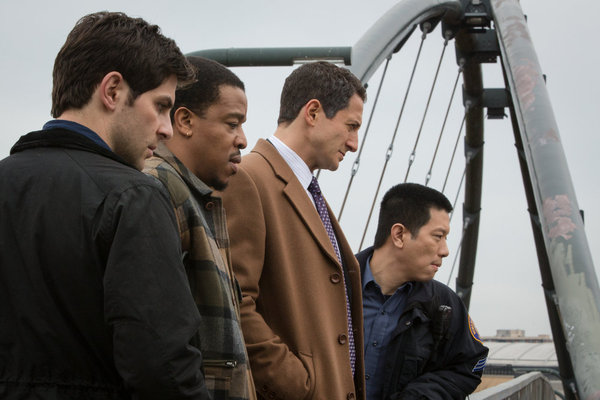 "Grimm": Pictured, from left, are David Giuntoli as Nick Burkhardt, Russell Hornsby as Hank Griffin, Sasha Roiz as Capt. Renard, and Reggie Lee as Sgt. Wu. "Grimm" is moving to the Tuesday at 10 p.m. timeslot on NBC. (Photo by Scott Green/NBC)

NBC is rewarding "Grimm" for not just surviving on Friday nights, but thriving in a 9 p.m. timeslot where other sci-fi action-adventure series have faltered. The Peacock Network is shifting "Grimm" to Tuesdays at 10 p.m. - following its highly successful reality singing contest "The Voice."

"I think it's all very exciting," said "Grimm" star David Giuntoli. "I think that NBC is showing a lot of faith in 'Grimm' by moving us to Tuesday nights."

"We're very excited to expose 'Grimm' to an entirely new audience and, you know, scare and befuddle the whole new segment of the population," he added.

All kidding aside, "I think we have - listen, it - a successful television show is a mystery how to make it. But there has to be certain components," Giuntoli said. "We have writers and creators who are seasoned and excited, and that's a really great combination. They know what they're doing. They have found the sweet spot. David Greenwalt, you know, has this gallows humor about him, as does Jim Kouf - our two main writers, executive producers. And they balance story well with a lot of darkness and a little bit of levity. And, you know, there's some very lovable characters. And that's what it takes. They just know their stuff."

As "Grimm" heads into this season's final four episodes, Giuntoli said, "You could definitely see a Nick and Juliette reunion. And again, in 'Grimm' fashion, they love tearing people apart and bringing them back together, and who knows how hard they're going to make that for Nick and Juliette.

"What you will be seeing that I haven't spoken about yet is a lot of - we deal with the undead in a way that's really never been dealt - in a way that it's never been approached before - in very typical 'Grimm' fashion. So zombies, 'quote unquote,' will be coming to Portland. And I would also say the cliffhanger of this season is - I don't know how the writers are going to get themselves out of this corner that they've painted themselves into. One of the cast may not live through the finale."

In recent episodes, Nick has formed something of a union with Capt. Renard (Sasha Roiz), who is a hexenbiest. Fans, undoubtedly, are surprised Nick is getting along with the man who may or may not be the show's ultimate villain, while quarreling with the woman he hoped to marry. (Juliette [Bitsie Tulloch], in fairness, was poisoned, lost her memories of Nick, then found said recollections, only to be haunted - literally - by images of the past.)

Giuntoli suggested these relationships offer more than meets the eye.

"I want to speak especially to the relationship between the captain and Nick. I wanted to make sure that, even though we are working together, I'm not too easy with him. I wouldn't call it a friendship. I wouldn't call us pals. I wouldn't - we wouldn't go out and eat together. I think we more or less have a common enemy (in evil royal wesen)," Giuntoli said. "I always like to think - when I'm working with the captain, I always think about that picture from World War II where, like, Stalin and FDR were sitting next to each other with Churchill. You know, like, how did Stalin get there? But they just had a common enemy. And so we're working, you know, tentatively together. He did, after all, try to kill my aunt.

"So as far as Juliette goes, you know, I think we're going to be seeing us kind of patching things up - turning things around a bit. And I'm sure that, in 'Grimm' fashion, they'll find some way to make that as difficult as humanly possible."

See for yourself when "Grimm" airs tonight on NBC.