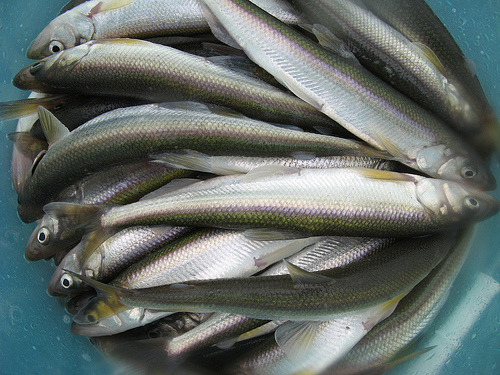 With the annual Smelt Festival less than a week away - Friday, May 3 - I thought I would give you a little background on how it started. Make note: I was there at the beginning, so my story is accurate!

The Niagara River Anglers Association was organized back in the spring of 1982 by a handful of Niagara River fishing enthusiasts. In June of that year, its first organizational meeting was held at Gene Parrone's Buena Vista Restaurant in Lewiston (now the Lewiston Village Pub). It took off from there.

Looking for activities for our members, in the spring of 1983 - 30 years ago - when the smelt started coming up the river on their annual spawning journey, a handful of members gathered at the old "sand docks" to dip for them and, off the tailgate of a member's pickup, make an impromptu fish fry on a Coleman stove with a small frying pan and enough oil to cook them. The smelt were running good that night, and we had all we could eat, plus sharing them with passers-by and other dippers.

The following season we got together again and, this time, we had a few more members. But it was raining cats and dogs and a cold wind blowing out of the north. Even with bad conditions, we managed to get into the smelt again. We had all the stuff this time for the fish fry, including the pancake flour, a shaker bag, the cocktail sauce, more oil, and paper plates. Problem was, there were no shelters at the "sand docks."

So we opened the sliding door on my van, set the Coleman stove on the floor, and started frying away. I thought my van was destroyed - the fish smell, and frying oil smell didn't evaporate from my van until the following October. Ugh, and hot sunny days were the worst.

Remember, there were no lights at the docks back then like we have today, just lanterns, headlights and flashlights. Lights came later but, when they did, the fishermen felt the bright lights made the fish move out and away from the docks, making catching harder. So in an experimental try, then-Department of Public Works Superintendent Ernie Murdoch was gracious enough to give it a try, and turned the lights off during the smelt run. Some felt it worked, and others said it didn't make any difference.

This continued to be an annual outing for the NRAA membership, and it just kept growing. About 2001 or 2002, then-Village of Lewiston Mayor Richard Soluri saw a good thing happening and hit upon an idea for his village, to make this event grow even more so more people could enjoy this rite of spring. Soluri lined up the president of the Anglers Association, Doug Stein, seeking out his thoughts along with others on the board of directors.

Truthfully, I was opposed to someone else stealing our thunder, and the Anglers losing some of its notoriety with this great spring ritual that we started. Now, I'm not wrong on a lot of things, (ask my wife, ha!) but this is one time I was wrong.

The Lewiston Business and Professional Association (now the Niagara River Region Chamber of Commerce) took over and the event exploded the very first year, and has continued exploding every year since.

With the event spreading through the village, and restaurants offering up smelt on their menus for the less hardy not attending the event on the river, everyone gets a little taste of what this fest is all about. Without people like Alan Hastings at The Silo Restaurant contributing all he can, plus Modern Corp., Chemical Waste Management, Falls Tent & Awning Co., all the volunteers and, in particular, the Niagara River Anglers Association and its team of volunteer members, this would be impossible. Remember, some of these Angler volunteers have been cooking big batches of smelt for more than 30 years!

If you want to dip for yourself, first you need a valid fishing license. Next you need a dip net, which is usually a round net with a long extendable handle to reach out into the water with, and a bucket to put your catch in. You can use any size net, but you are only allowed eight quarts to take home. Don't get caught with more, or the Department of Environmental Conservation officer will ruin your night. Especially now a days with cell phones, someone will call enforcement, and the DEC officer will be on you like flies on leftovers.

Access to these little critters is not just limited to the Lewiston Landing. If you are hardy enough, there are steps to take you down below Artpark. There is no dock, so bring a pair hip boots, as you might have to wade out a little. Be careful.

In my memory, we haven't lost a dipper down there yet due to the swift current and the slippery rocks, so make sure we don't read about you in the newspaper, or see your smiling face on local TV. If you never dipped before, watch others around you and ask for help. The fraternity of dippers is made up of great people.

Be sure to dress warm enough, nights get cc-cold. If you like these rich-in-omega-3-fatty-acids, little fish, go down to the landing to just "nose" around, bring a small plastic bag with you, and ask someone in that fraternity to dip you a little bag full.

Take the smelt home, cut their heads off with a pair of scissors, run a scissor point down their bellies, and remove the entrails with your finger (or use the handle on a teaspoon if you don't like doing that stuff). Rinse lightly, but not too much, or you will wash the flavor away. Coat the smelt with pancake batter - that's what they use at the Smelt Fest - then deep fry.

Leave the tail on, the tiny scales and the bones in them. When you fry them, the bones turn soft like sardines in a can. Eat everything except the tail - that is your little handle to hold them with.

If you don't want to do all that, take a ride through the village, and you will see smelt flags outside the restaurants that are serving smelt. Go inside, sit down, and place your order. Enjoy!