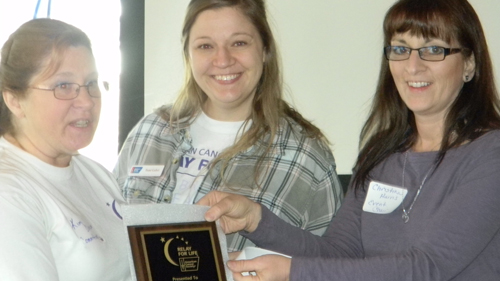 Lewiston/Niagara Relay For Life kicks off for 2013

It was a celebration of past successes and plans for the future, as Relay For Life of Lewiston/Niagara recognized top contributors for 2012 and set the stage for 2013 at a breakfast kick-off Saturday morning at Water Street Landing in Lewiston.

"We have a lot to be thankful for," led off Lewiston/Niagara Relay Chair Christina Harris, who coordinated the Saturday program with Co-chair Michelle Hosie and Tami Gabri, American Cancer Society staff partner. They reported that the 2012 event held on the Lewiston-Porter High School running track was again seen as successful. Relay Lewiston/Niagara, one of several held in the area with proceeds benefitting American Cancer Society research programs, set a goal of $79,000 to be raised. Turns out Lewiston/Niagara's final tally topped that, with $83,728 raised among the 271 teams and 88 survivors who participated in the daylong Relay. Not bad for an event that competed that weekend with another local fundraiser - Lewiston Village Pub's "PubFest" to benefit the Variety Club at Academy Park.

"Thank you to all our hardworking fundraisers!" exclaimed Harris to rounds of applause.

A complete listing of the 2012 Lewiston/Niagara Relay awards honorees can be found on its website, http://www.RelayForLife.org/LewistonNY.

Other big news from Saturday's kickoff involved a date change and new venue announcement for the 2013 event. Gabri told the group that, this time around, the Lewiston/Niagara Relay, which is entering its 16th year, would return to the popular overnight format of earlier years. The Relay will take place Saturday and Sunday, Aug. 3-4, at Reservoir State Park on Military Road. Check-in time will be at 1 p.m. Saturday; the Survivor's Luncheon will be at 2 p.m., the opening Survivor's Walk is at 3 p.m., and the Luminaria Ceremony will be at 9 p.m. The event concludes Sunday morning at 6 a.m.

Harris and Gabri explained that Relay organizers felt a new date and venue change were needed to better serve the Niagara County community as a whole. They said that, while the Lewiston-Porter School District has been a gracious host over the years, the Lewiston Relay was also conflicting with student events on campus and with activities in the Village of Lewiston, and other factors were coming into play.

"We love Lew-Port; we had a great relationship there, but we really want to expand this Relay, help out this community," said Gabri. "With this new location, we really want to reach out to Niagara-Wheatfield, Sanborn, the Town of Niagara. We felt with the new location it would be best for everyone. It's centrally located, there is security there, and we can camp overnight ..."

Plans call for the 2013 Relay setting to be along the western side of the park, north of Witmer Road, adjacent to the new ball diamonds. Camping opportunities would be available, there are plenty of park shelters, better parking and more facilities for Relay participants to use.

"Reservoir Park offers much more for us. There's lots of reasons to move," Harris said, noting that among them is the renovated park's size, the camping options, better security with the New York State Police substation nearby, and the fact that Relay could again return to being an overnight event.

Gabri said the 2013 Relay's theme would be "Camp Out for a Cure," and said Relay organizers wanted to return to their focus of being an overnight event. "There'll be plenty to do, people can come and go," she said, and "participants do not have to stay the whole night."

"We wanted to make it an overnight event," said Harris. "That's what it should be because cancer never sleeps."

"And that's when the fun, starts," added Harris.

For interested participants and those seeking more info on the upcoming Relay, organizers report that team information meetings are slated for May 8, June 12, and July 10, all from 7 to 8 p.m. at Water Street Landing, on South Water Street in Lewiston. Other Relay planning events are being eyed in Sanborn and the Town of Niagara, but are not yet finalized.