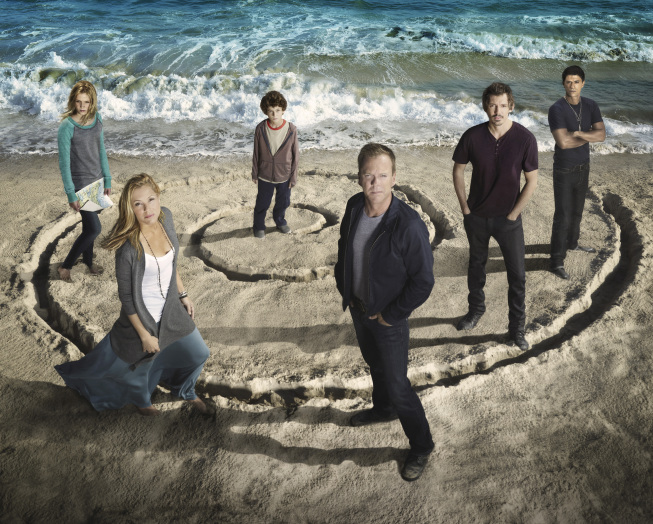 When "Touch" returns to FOX for its second season, it will be set in a new city, with new characters and a new direction. Say goodbye to the Big Apple, the nefarious group home and the stand-alone episodes of the week. Instead, the show will boast a bigger, more action-packed, L.A.-set storyline.

"By the end of the season, we had introduced a more serialized engine to the show, and we ended the season with Kiefer Sutherland's character (Martin Bohm) taking his son (Jake) and running, basically on the run, and coming all the way to California in search of this mysterious girl names Amelia," Exec. Producer Tim Kring explained. "We sort of introduced the idea of this mystery girl early in the season, in season one, and by the end of the season we are in Los Angeles on the journey to finding her, and that connects us up with Maria Bello's character who is Amelia's mother. That's where we pick up the season.

"In many ways everything changes from the first season to the second season in that we took the entire storyline and took it from New York City to Los Angeles, and that entire world and all the characters that were in that world are starting pretty much fresh in the second season."

"Touch" started strong in its first season - both in storytelling and ratings. But as the show became increasingly, well, touchy-feely, it started to lose viewers. It was especially odd watching Sutherland, fresh from his butt-kicking run as Jack Bauer on "24," portray a pushover.

As the season winded down, however, Sutherland's character found himself in more action-packed situations as the Bohms learned of a larger scheme to capture Jake and harness his special powers (he can sense and mathematically predict world patterns).

Kring said his plan, from the beginning, was to take "Touch" down this road.

"Well, again, if you paid attention to the show last year, we did start as a sort of standalone show because, frankly, we wanted to make sure that we got viewers when new viewers were sampling it at the beginning of the season," he said. "We wanted to make sure that people weren't thrown off of the show because they didn't know what was going on. But we started introducing the idea of a serialization really early on. In the very first episode after the pilot, we introduced that there was a mysterious person in this room in the board-and-care facility. And we slowly started to leak out who that was. And by episode six, when Danny Glover's character was killed, we knew that he died in a way that was mysterious, and it was attached to this corporation, Aster Corps., that he seemed very afraid of.

"I think it was a very subtle burn, a kind of slow fuse that built to the last three or so episodes. And by that time, the show had morphed into much more of a serialized show. And then picking up where that left off, we kind of picked that up in a full-blown way. It was designed, but a bit subtle for the audience, I think."

As for the comparisons with "24," Kring said he's happy to have a lead actor who is so versatile.

"I think it's an advantage to have somebody who has that in his wheelhouse, and this character was always designed to be an every man who was put in extraordinary circumstances and forced to become much more of an action kind a guy than Jack Bauer ever was," Kring said. "In other words, Jack Bauer, his backstory was much less of an ordinary guy; he was sort of built to be that guy. This guy was not built to be that guy. He was a reporter and a family man, but he's thrown into these extraordinary circumstances, and I think it's really just using some of the skill sets that come along with somebody like Kiefer."

Season two of "Touch" picks up right where season one left off - with Kiefer Sutherland's character, Martin, on the run with his son, Jake (David Mazouz).

Martin is determined to keep Jake safe from those who want to exploit his supernatural abilities, but Jake is on a mission of his own - to find the elusive Amelia (Saxon Sharbino). When Jake leads Martin to Los Angeles and to Amelia's mother, Lucy Robbins (Maria Bello), these three form an ad hoc family, searching for the girl who may be the key to understanding Jake's abilities.

Factoring into the unfolding equation is the genius of Aster Corps., Calvin Norburg (Lukas Haas), who's on the verge of making a career-defining discovery, as well as the extreme religious zealot, Guillermo Ortiz (Said Taghmaoui), who stops at nothing to attain his vision. As ominous connections appear, Martin remains determined to uncover a global conspiracy in order to protect his family and save the lives of the innocent in the special two-hour season two premiere episode of "Touch," titled "Event Horizon/Closer," airing Friday, Feb. 8 (8-10 p.m.), on FOX.