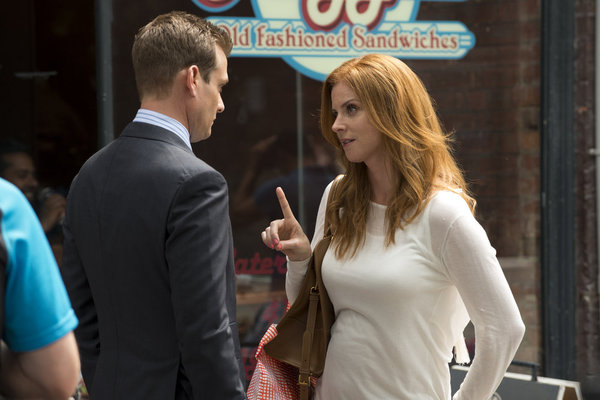 Fans of "Suits" are on the edge of their seats waiting to see how the hit drama will follow - or top - its whale of a midseason summer finale.

When we last saw the lawyers at Pearson Hardman, Harvey (Gabriel Macht) kept his job, as founding partner Daniel Hardman (David Costabile) was ousted and Jessica Pearson (Gina Torres) was placed firmly in charge. What will they do now that their biggest threat is out of the picture? Or is he? And what will happen to Louis (Rick Hoffman), who sided with Hardman?

Mike (Patrick J. Adams) made strides with Rachel (Meghan Markle) but, in the wake of his grandmother's passing, he stepped out with an old fling. Is this the end for Mike and Rachel, or can the super-genius think of a way to fix things?

Regardless of what happens, Donna will be there to keep everyone in line and on task. It's only fitting, then, that Sarah Rafferty, the actress who plays Harvey's stylish, no-nonsense secretary, offer some information for fans on the heels of the show's return (10 p.m., USA Network).

"The firm is going to be busy picking up the pieces in the back six (episodes) after the power struggle that we went through in the beginning of the season," she said. "So Donna is going to be busy helping out with Harvey and, you know, having her usual fun."

Additionally, she said "Suits" is going to delve deeper into both Harvey's and Rachel's personal lives and backstory.

Now, while it may seem daunting for some actors to return to work after such a powerful story arc, Rafferty said that's not the case with her "Suits" cast (even with a long break in between episodes).

"I think that there are a number of things that make it easy to have you return to it. And I keep going back to the writing, but the writing is just so - has such clarity for these characters, and it's so true to who these people are and has such a strong voice that you can kind of get right back into it," she said. "I'd also like to say, and it sounds superficial, but putting on those clothes really brings you back. Like you put on those high heels, you walk like Donna, you know? You know, you're almost the same height as Jessica, so you're seeing her in a different, you know, have a different energy.

"I think you can get right back into it when you're on set, and I'm sure that after, you know, some rest, we'll all be very excited to go back to season three, which we've been so lucky to be picked up for, which is great."