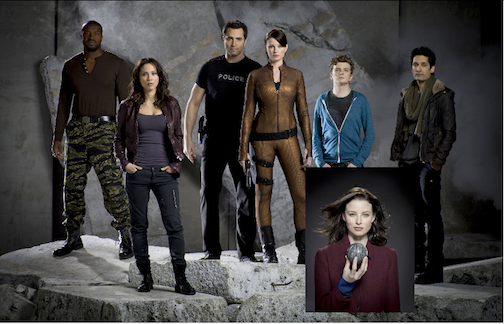 It's been an interesting on-screen progression for actress Rachel Nichols.

She started off as a timid profiler for the FBI in the short-lived "The Inside." From there, she joined the ranks of the CIA, where she got to dress up and take down criminals in "Alias." A bow-and-arrow-wielding Nichols then jumped out of a helicopter and rode a motorcycle through Paris in pursuit of Cobra as part of an elite military unit in "G.I. Joe."

Now, she's going back in time to stop terrorists from changing the future in Syfy's "Continuum" (Mondays, 8 p.m.)

Is it a love of the badge that motivates Nichols? Well, sort of. Of her assorted law enforcement roles, Nichols says, "I like to carry guns and kick butt."

"I think there's something really strong and sexy about those female roles, and there aren't necessarily a lot of those around," she says. "I consider myself very lucky to've been able to take on so many of those roles and to now have a fanbase that finds me completely believable and interesting in those powerful, action-oriented roles, because they're so much fun to play and I would like to keep doing them for a long time to come."

Her wish should come true with "Continuum," which has all the makings of catnip for Syfy Network viewers (think action-adventure, cool costumes, even better gadgets and time travel).

The story begins in the year 2077. Looking to escape a death sentence - and change their world - members of the terrorist group Liber8 escape and travel back to 2012. Nichols character, Kiera Cameron, a devoted City Protective Services officer, gets swept up in the time jump, and finds herself 65 years in the past.

Though desperate to find a way home, Kiera knows she can't let Liber8's plans succeed, or her world will cease to exist. Posing as counter-terrorism expert, she joins the Vancouver Police Department to use its resources to track down and stop her enemies.

"My whole goal is to get home, to get back to where I'm from," Nichols said. "I don't want Keira to be wallowed in the sadness of missing her family in every episode, but she's gotta think about them at least once in every episode because that's her driving force. She may realize and understand that she's probably in 2012 for a purpose, but that never for one second means that her No. 1 goal isn't getting home."

The first season of "Continuum" has already aired in several global TV markets, including Canada. The series has been successful in finding and maintaining an audience - something rare for a science fiction show these days.

Writer and Executive Producer Simon Barry said he built the cast around Nichols, a former model who has also starred in "Criminal Minds" and in J.J. Abram's reboot of "Star Trek" (she was Uhura's colorful roommate).

"It was really exciting. I've never been the first person hired on any job ever before," Nichols said. "I loved all of the characters from the very beginning, and they just immediately started casting Liber8 and the rest of the police force, Inspector Dillon (actor Brian Markinson) and Eric (Knudsen, who plays Alec Sadler) up in Vancouver. I met Victor (Webster, who stars as Kiera's partner, Carlos Fonnegra) for a chemistry read and that was the first time I'd ever had the opportunity to do a chemistry read with someone who'd be playing my partner, confidant and leading man. All the guys that came in and read were great, but Victor was far and away my first choice, which he knows now so I'm not talking out of turn at all. I knew who some of the Liber8 characters were, but I didn't do any chemistry reads with them, so I just sort of showed up on set the first day and met everybody and thought, 'Wow, they've assembled such an impressive cast of characters that there's no way the show isn't going to work. It'll have to because everybody is so great.' It's one of the more interesting groups of people I've ever seen cast all at once, so the fact that's it's part of a show that I'm on was great."