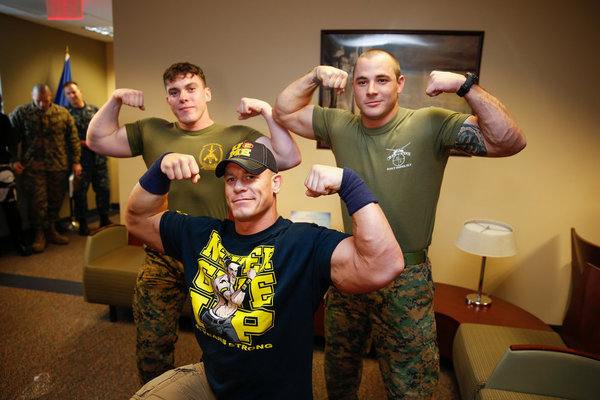 'WWE Tribute to the Troops': John Cena talks giving back

But we can see Cena: In the ring, as a top WWE superstar, and in real life as a role model - one who has granted more than 325 wishes for The Make-A-Wish Foundation and who regularly supports the U.S. military.

Cena and the WWE recently spent a weekend at the Naval Station Norfolk (Virginia). They visited with troops and families while filming "WWE Tribute to the Troops" presented by Slim Jim. The special airs Wednesday, Dec. 19, at 9 p.m., on the USA Network, and then again on Saturday, Dec. 22, at 9 p.m., on NBC.

"This is a very important relationship that the WWE shares with the military - it's over a decade strong now," Cena said. This is our 10th episode of the 'Tribute to the Troops,' and I just really take great pride in not only the special itself, but the WWE's affiliation with the armed forces - stemming from the National Guard to every other service branch. And it just is - it's a wonderful special, and I've been involved nine of the 10 years. So, it's something that I take great pride in; it gives me a great feeling of pride every year to be a part of this."

The WWE, of course, hasn't always been known for its charitable endeavors. But Cena said "Tribute to the Troops" is reflective of a change in the company's attitude.

"It was a legitimate conscious decision (to give back)," he said. "Our programming has changed so much over the years. I started in 2002 and our program was more TV-14, edgy, anti-hero based, conflicts-hero based. And since then, I think our program has made a turn for the better - into a more PG environment; all of our programming platform-wise (into) PG. And the reason for that is because - simply because the people attending our events. A lot more families began to attend, more children began to attend. So when you have those young and youthful eyes looking at you, and you know that you're global - we're truly translated in 140 countries - you tend to have choices to make. And me being portrayed as a good guy on our programming, it was an obvious choice that I wanted to do my best to use my television time to set a good example."

With regard to "Tribute to the Troops," Kevin Hennessy, public relations director for the WWE, said, "WWE superstars and divas spent the entire weekend visiting military in the Norfolk, Va., and Hampton Roads area. The Norfolk and Hampton Roads area is home to 125,000 active duty members, 830,000 veterans and many, many more military families. Naval Station Norfolk is the crown jewel of the U.S. Navy. ... (But) it's not just one base that we visited. We visited multiple bases. So while Naval Station Norfolk is the crown jewel, there's also Naval Station Little Creek, Naval Station Oceana. Superstars wound up flying in F18s. They met the servicemen and women in different parts, they - I think even Sheamus had a dodgeball game with some little kids."

U.S. Rear Admiral Tim Alexander (Navy Mid-Atlantic region) said, "The sailors, the Marines here in the Hampton Roads area (and) their families were absolutely delighted to have the opportunity to meet the members of WWE, and to be able to show them around the bases when they toured the bases, and then to attend the main event downtown at the Norfolk Scope (Arena)."

"They are, they are, and that just becomes - that comes with our relationship with the military," he said. "We have a great relationship with Armed Forces Network. We - all our programming gets put on Armed Forces Network; I believe our pay-per-views also have an outlet on Armed Forces Network. We get a chance to give any man or woman in uniform, domestically or foreign, if they show up to (our events, we) give them free tickets. So we encourage the men and women who defend the freedom of this country and give me the right to work to be as involved with the storylines as they can and they are.

"It was amazing; no matter where we go ... Navy, Army, Air Force, Marines, you know, or National Guard outpost - everyone seems to know what's going on with the WWE. So we put our programming out there and they surely enjoy it and watch it."

"WWE Tribute to the Troops" will feature performances by Grammy-nominated, international superstars Kid Rock and Flo Rida, and matches from the WWE's biggest superstars and divas. The show will also feature appearances by Disney's The Muppets, "Access Hollywood" and NBC Sports' Michelle Beadle, and more. The program airs Wednesday, Dec. 19, at 9 p.m., on the USA Network and then again on Saturday, Dec. 22, at 9 p.m., on NBC.