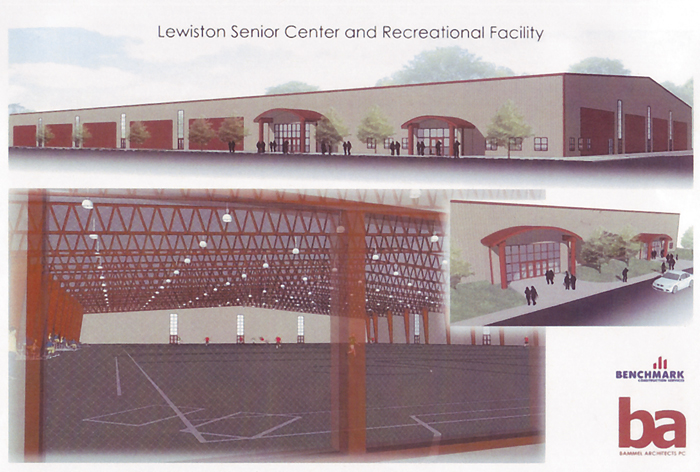 Plans for a new recreation/community/senior center and a donation from an area hazardous waste landfiller were the newsmakers at opposite ends of an otherwise routine Lewiston Town Board work session Monday.

Members of the recreation center committee, organized earlier by Supervisor Steve Reiter, presented details for the complex, eyed on land fronting Lewiston-Porter High School on Creek Road, currently owned by the Lewiston-Porter School District. Estimated to cost $9.6 million, including land acquisition, proposed plans for the Town of Lewiston Recreation and Senior Center envision a 140,000-square-foot multipurpose facility. It would feature a 90,000-square-foot multipurpose field designated for athletic uses, including baseball, softball, soccer, lacrosse, football and volleyball. The field would also be open to other activities, such as tournaments, conventions, car or boat shows, trade shows and concerts.

A new Lewiston Senior Center would also occupy an estimated 6,300 square feet of space at the site, replacing the existing 4,000-square-foot facility on Lower River Road and also accommodating the services and needs of Sanborn seniors. The new facility would be designed as the needs of Lewiston Senior Center operations dictate. Reiter said one of the project's goals would be to provide a better quality of life for Lewiston's seniors through use of a new facility, and would build upon plans for nearby senior housing proposed earlier by People Inc.

Committee members had initially considered three locations - the current Lew-Port site, an area on the western side of Creek Road directly across from the Lew-Port campus, and a site on Upper Mountain Road.

"We favored the Lewiston-Porter campus," said committee member Gary Rose. "We saw this as an excellent fit."

The Lewiston-Porter Board of Education has been negotiating with the town on the land sale. Lew-Port Superintendent of Schools Chris Roser said the district is considering a purchase price of $5,000 per acre for the land. The land sale matter is expected to be addressed Tuesday, Dec. 18, at the Lew-Port School Board's monthly meeting, at 6:30 p.m. in the Community Resource Center.

As to financing, Reiter said he and the committee had been considering three different bond payment scenarios -- 40 years, 30 years and 25 years - to pay for the center's construction. Reiter discussed different funding options Monday, where Greenway money would be among those used to help pay off the bond debt, and others possibly coming via assistance from neighboring communities such as Porter and Youngstown and also from sponsorship sources. The town currently receives $510,000 in annual Greenway funding as a result of its earlier participation as a host community stakeholder in the State Power Authority 50-year relicensing agreement finalized in 2007. Under one scenario, a 50-year bond for example, Reiter said the town could utilize $350,000 yearly in Greenway money from the annual $510,000 to provided to Lewiston, with remaining money - estimated to be $35,000 - coming from such sources as funding from neighboring communities or sponsorships.

Reiter said that in light of the new rec/community center discussions, the town has re-evaluated its Greenway projects at nearby Joseph Davis State Park and decided to lower its expectations, with new plans now limited to the boat launch facility and a campground in the park. "We decided to scale back" on projects, said Reiter, noting concerns by State Parks officials on the town's earlier plans. Reiter said those two projects would total $2.5 million in Greenway improvement money for the park. Greenway had approved up to $5.7 million in improvement monies for JDP this past year.

Of the rec/community center proposal, Reiter called it "a wise use of Greenway money," adding the project "has no effect on the tax rolls; it's taking a piece of school property and putting (it) on the town's."

As to operating costs, Reiter and committee members envisioned the center would be profitable to the town from a number of its expected operations, including revenues from use of the main fields, the basketball court, lacrosse facilities, tennis and fitness uses, plus those revenues from parties/ meetings, and the pro-shop and snack shop expected to operate. The facility would be active with a variety of uses from November through May and have an "off-season" with uses limited to fitness and tennis memberships and other activities.

Once the Lew-Port School District reaches agreement with the town on a sale of the lands, Reiter and committee members envision an active schedule as to future activities. By mid-January, site selection and site reviews would be completed; and various preparations under way or completed en route to a expected spring groundbreaking followed by an active construction schedule. An October 2013 public use opening is forecasted.

Roser indicated Monday that with the likeliness of the town's recreation/community center becoming reality, the district would be re-evaluating its own plans for capital projects at the high school, including the gym, and would also be considering new options for student athletics/use at the facility.

More to come as news develops.

Other major news from Monday came at the end of the Town Board's work session, where members of Residents for Responsible Government appeared and voiced their opposition to Reiter and the Town Board accepting a $5,000 donation from CWM Chemical Services LLC in the form of a sponsorship to help fund operations of the Lewiston Family Ice Rink this winter.

At issue is what RRG members see as a conflict of interest with the town taking money from CWM. Over the coming year, CWM is expected to become the focus of intense state Department of Environmental Conservation reviews and public hearings on its seeking a new toxic waste landfill facility (Residuals Management Unit 2) and the possibility of long-term operations expansion in Porter. RRG members argue the donation represents CWM influences to the town in light of its expansion plans, that other municipalities have declined CWM sponsorships/donations and that Lewiston should do so as well. (See RRG letter on Page 4 of today's Sentinel)

"Please don't try my patience," said Reiter as he opened the forum to RRG for what he called "an informal meeting. I'm only doing this because I understand your concerns. I would like to hear your concerns."

Reiter added the board would not be taking any action on the matter.

RRG comments included those by:

•Karen Allen of Lower River Road, who argued the town should return the $5,000 donation. "Schools have not accepted money," said Allen, adding, "When they (CWM) are asking for their license and expansion, this is going to look bad, like they have supported the town."

•The Rev. Charles Lamb, a RRG member, who said that by accepting CWM's donation he felt that Lewiston is compromising its earlier stand on opposing CWM expansion.

•RRG President April Fideli, who noted Lewiston's past opposition to CWM. "For the town to be truly effective it cannot both oppose and support this company."

•Residents Dennis Dueling and Margo Walker. Dueling questioned why other funding could not be considered by the town; while Walker said the town's taking the money raises "a conflict of interest" in light of its stated opposition to CWM

•Resident Amy Witryol, who questioned a CWM ad that appeared in last week's Sentinel listing the Town of Lewiston's ice rink as one of the company's beneficiaries in 2012. It's "very unfortunate to see the town mentioned in a paid advertisement for a company it is opposing," Witryol told the board. She added there's "a lot of entities mentioned" in the ad that told her they had not received CWM money and were surprised on their inclusion.

Witryol also asked the board why "it cannot figure out a way" to fund town operations, including the rink without accepting money from CWM, particularly as the company moves to pursue a new landfill. "Accepting $5,000 is not worth the risk" to the town as it's being seen as condoning CWM's activities, she said.