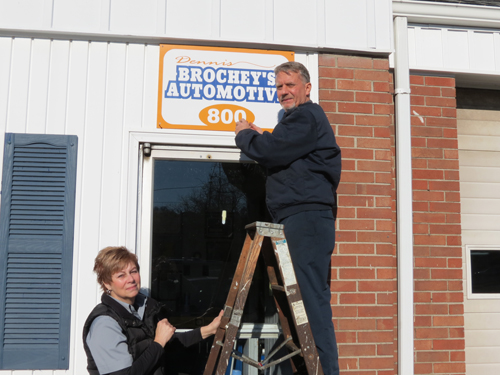 Dennis Brochey takes down the sign outside of his Center Street auto shop as his wife, Cathy, holds the ladder.

Transformation at Center and Eighth streets

Editor's note: After this article was written, the Brocheys encountered a delay that pushed back their sale. They opted to remain open until June 2013 so as to offset the associated costs.

Over the course of 40 years, master technician Dennis Brochey has worked on more than 100,000 automobiles in his Center Street automotive shop. At the end of this month, he'll hang up his wrench. The Village of Lewiston trustee intends to spend more time serving the community and enjoying his wife, Cathy, and their family.

"One thing I've always wanted to do was to get in the car and drive across the country to the Rocky Mountains, Mount Rushmore - stuff like that," Dennis Brochey said. "Maybe hit Seattle, California. I don't know. Maybe a month-long trip?"

"When you're self-employed for years, employees, customers - they always think, 'Oh, you can take off whenever you want.' That's the farthest thing from the truth," he added.

"Nobody pays you to take a vacation," Cathy Brochey said.

"I could never get my customers to all chip in and pay for a vacation!" Dennis responded.

Free time and money were two things Dennis had little of when he began working at 800 Center St., then known as Lewiston Sunoco, in October 1972. He regularly worked from 7 a.m. until 11 p.m. seven days a week. His hourly wage was less than $2. And, because his parents owned the shop, he was often asked to complete side jobs, too.

Despite the intense workload, "I really enjoyed learning," Dennis said. "In the beginning I learned something new every day."

Eventually, Dennis began to work more reasonable hours. He and Cathy saved their money and, in 1990, he purchased the auto shop from his mother, Josephine.

Over the course of five decades, the Brocheys have formed a special relationship with their customers. They liken it to the bond between a family doctor and familiar patient.

"After 40 years, we've got generations (of customers)," Dennis said. "The older customers we had back then, their kids deal with us."

"We did talk to a couple of them, and they were hugging us; so sorry to see us go," Dennis said. "They felt we were family. ... They trust us like family."

The Brocheys said they will miss their customers.

"The customers were the high (point)," Dennis said.

Despite the economic downturn, the Brocheys stressed the shop remains very profitable. They didn't plan to sell the business, but received what Dennis called "the right offer" from local investment company Sincon Real Estate LLC. (Not affiliated with Ellicott Development, which purchased property on the other side of Eighth and Center streets.)

"Everyone said this is the right time," Dennis said.

He and Cathy thanked all of their customers.

"We're going to miss you, too," Dennis said. "We hope to see you around the village."

"Without them, we would never have had a successful business," Cathy said.

Dennis Brochey's Automotive is scheduled to close Dec. 21 for the holidays and then for good in the first part of 2013. The Brocheys do not know what will become of 800 Center St., and no development plan has been presented to the Village of Lewiston Planning Board.

In addition to serving on the Board of Trustees, Dennis is very active with the Kiwanis Club of Lewiston and is the New York state chairman for the United States Powerlifting Association.