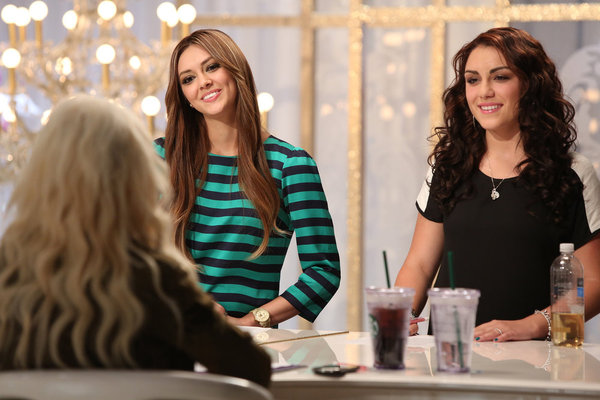 "The Voice": Devyn DeLoera works with MarissaAnn before the "Battle Rounds." (photo by Tyler Golden/NBC)

'The Voice': Devyn and MarissaAnn 'Free Your Mind'

If there is one cardinal rule on televised singing competitions, it's stay away from the divas. In short, you don't sing Mariah, Whitney, Celine or Christina.

Imagine, now, if the four of them teamed up to form a supergroup. That's sort of what En Vogue represented in the 1990s. Cindy Herron, Maxine Jones, Dawn Robinson and Terry Ellis each had a stunning voice and, together, En Vogue had an unmatched harmony.

On the final week of the "Battle Rounds" on "The Voice," Devyn DeLoera and MarissaAnn were paired up and asked to replicate as a duet what it took four members of En Vogue to create. Coach Christina Aguilera tasked them with "Free Your Mind," a song that went top 20 on no less than four Billboard charts in 1992.

Working with Aguilera and Green Day's Billie Joe Armstrong, Devyn and MarissaAnn rose to the occasion and wowed all four judges.

"That was so great. You were so evenly matched," Adam Levine said.

"So proud of you both," Aguilera said. "You both have shown that you're true superstars today."

The two singers credited their time working together, and with their coach and mentor, for the success of the performance.

"I feel like we really worked together as a team a lot, like we'd call, you know, extra practices. And we were just working, you know, even on keyboard to figure out what sound is good and what to do where," Devyn said. "And I think with all the time we put in, it just turned out OK."

Devyn won the "Battle Round" duel, and MarissaAnn was "stolen" by coach Blake Shelton.

Entering the "Knockout Rounds," both singers seem confident and capable - which is remarkable considering Devyn battled hardcore shyness as a child, and MarissaAnn is just 15 (and the show's youngest performer). Both are taking advantage of their time on "The Voice."

"I think it's really given us - I mean, obviously such a huge platform to, you know, perform," Devyn said. "And now we can really get our names out there, and people are responding. And it's great to hear people saying that they like you and they like what you do and what you stand for and things like that. So I feel like that's given me a big push, you know, to do what I do on a higher level. I'm just really excited; this has been such a great experience."

"I feel like throughout this experience, I've just learned so much about myself," MarissaAnn noted. "And I've seen how much my voice has grown, my performance has grown, you know, my stage presence has grown. And like I said, taking the advice from these big-time artists has helped me so much. And it's great to see the responses from people. And I'm really excited; I've realized much more that this is what I want to do."