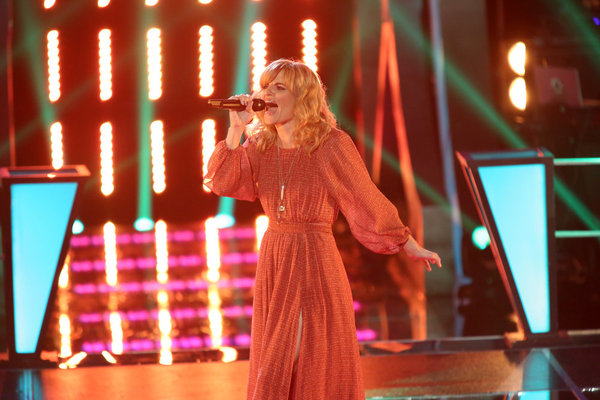 Suzanna Choffel performs on "The Voice." (photo by Tyler Golden/NBC)

Perhaps no voice on NBC's "The Voice" has been scrutinized more than Suzanna Choffel's.

The Texas music teacher wowed coaches Adam Levine, CeeLo Green, Christina Aguilera and Blake Shelton during the "Blind Auditions" with her rendition of Fleetwood Mac's "Landslide." Then she defeated the soulful Lelia in the "Battle Rounds" with her soaring salute to Florence + the Machine's "Dog Days Are Over."

But in both cases, the coaches complained they couldn't hear enough of Suzanna in the songs. First they said she sounded like Stevie Nicks, and then they compared her to Florence Welch.

Now, neither observation is an insult, of course. Both Nicks and Welch are world famous for their red-hot rasps and visceral vocals. That Suzanna is at their level is a compliment.

Suzanna knows that, but she admits the judges' feedback has been frustrating.

"Yeah, a little bit," she says. "I think that this, the nature of the show, you know, you don't sing your original songs, if you write your own songs. You kind of get assigned songs or sometimes you get to kind of voice your opinion in what you want to sing. But you definitely get pigeonholed once you do sing a song by a particular artist. Particularly if you sound like them.

"And I happen to sound slightly like Stevie Nicks because we have a similar tone to our voice. We both kind of have that low alto thing, the kind of husky, sultry-singer thing. And so it's kind of - I think it just kind of goes with the territory. When you sing a song like that, you're going to get pigeonholed.

On the plus side, Suzanna's time on "The Voice" has given her a chance to showcase her decadent delivery. Viewers have discovered her talent, and searched online for her music.

"I think that through the show - what's great about it is ... the exposure," she says. "People discover your own music and your own sound and I think that I'm already starting to see, you know, through the fan activity, that people are forming their own opinion. 'Oh, OK, you actually kind of have your own style. Your own thing.' "

"I think this performance allowed me to showcase kind of a different side of my voice," she says. "I mean, yes, it's still a similar tone to what I did in the 'Blind Audition.' But it was a bigger song; I wasn't playing guitar. I got to come out physically a little bit more, which was kind of neat for me, because I always play with guitars. So it was actually a little bit of a challenge.

"But I think it just kind of allowed me to get a little bigger with my voice and show them. I know that in the blinds, you know, Christina mentioned that I was a little too soft and subtle for her taste. And I think that I actually surprised her a little bit, in particular in this round, because I was able to come out. It's a bigger song. It's Florence + the Machine, you know, so it's just a big, crazy song.

"I thought Lelia did amazing, too. I remember coming out of the performance and having no idea what's going to happen. I feel like we equally performed that pretty well. So it was pretty exciting to win."

Suzanna now moves on to the new "Knockout" rounds, where she'll get another opportunity to shine on Team Blake.