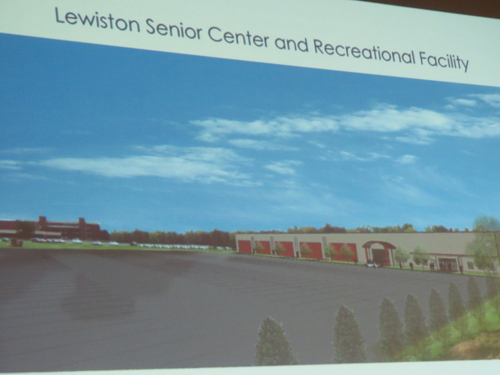 Facility could be built on Lewiston-Porter campus

A Town of Lewiston committee formed to look into the practicality of building a multimillion-dollar recreational and senior center has identified the Lewiston-Porter school campus as an ideal site. Members of that group addressed the school board Tuesday, showing a diagram of a 140,000-square-foot facility with 30-foot peaks, and a rendering of how it would look if placed parallel to Daryl Johnston Drive.

"This has been a two-year process of research, evaluation, assessment on this building - both locally and nationally," committee leader Ron LaDuca said. "When we first came together, we had 18 members, because we were looking at what is the need; what is the feasibility."

The Town of Lewiston sought representation from across Niagara County. An 18-member panel was formed and included experts in recreation, planning and design.

"We discussed this project for approximately six to eight months," LaDuca said. "From that, we identified what we wanted - what we felt this community needed - (from) the cross-section. What we wanted was a regional multipurpose recreational and senior center. And this is essentially what you see here today."

The committee was streamlined and its remaining members finalized the concept. The proposed building, with an estimated price tag of $9 million, boasts a multipurpose field for football, lacrosse, baseball and softball, plus facilities for basketball, box lacrosse, volleyball and roller hockey.

There is an area for concessions and retail, and a 6,000-square-foot senior center, which is 33 percent larger than the current Lewiston Senior Center on Lower River Road.

"We left this (portion of the) building completely empty simply because we want them involved," he added. "We want them ... to tell us what they want."

LaDuca said Lewiston-Porter was identified as a prime location for the recreational and senior center because, "We wanted to do something centric to a school system. And because of the resources that they have available, that we can make available, it's an ideal fit for children, families, people of all ages."

Reiter said the recreational and senior center idea makes sense because of its potential to spur economic development.

"We have certain amounts of money available from different operating agreements and things of that nature (that) can't be used for day-to-day operations," he said. "This has an opportunity to be profitable. A lot of people use these in profitable modes, particularly in Rochester."

Reiter said the recreational and senior center would improve the quality of life for residents and attract people from around the region.

"This is very early yet. We're still working this all through," Reiter said. "We've got a ways to go, but I like what we're doing. I like what our group's doing."

"And I think we've missed the boat on some of our seniors, too, in that our little senior center there doesn't really serve the whole community as well as it could in that we run our senior program from 8 to 5. Well, I'm a working senior, and there's a lot of working seniors 55 and above that would love to have an opportunity to go and use this facility for other things."

Lewiston-Porter Superintendent R. Christopher Roser called the Town of Lewiston's proposal "very intriguing" and said the recreational and senior center offers "real possibilities." He said students could use the facilities for gym classes during the day. Roser said the nighttime, from about 4 p.m. to midnight, is the peak community use time for this type of multipurpose center.

LaDuca said the facility could be used for trade shows, conventions, concerts and even emergency housing should a natural disaster occur. Reiter said it could hold festivals and other community events.

Jodee Riordan, president of the school board, said, "This is something that would make us stand out in Western New York." She suggested the recreational and senior center could make the Lew-Port campus the center of the River Region community.

Her colleague, board Vice President Michael Gentile, said, "it would be a real shame" to have the recreational and senior center built elsewhere.

He said Lewiston would attract more young families with a bolstered school campus.

The recreational and senior center, Simonson said, "would sell this community for anyone coming in looking to buy property."

"Our quality of life is second to none in Western New York," he added. "But this is the one thing we don't have. This would be the frosting on the cake."

Last year, Waste Technology Services President and CEO Gary Hall offered to spearhead the financing of a $2 million recreation center in the Village of Lewiston. Upon receiving negative comments from residents, he rescinded the offer.

The Town of Lewiston committee has spoken with Hall, but at this point the two sides are not working together on the new recreational and senior center proposal.

Part of the criticism surrounding a recreation center in the Village of Lewiston stemmed from residents' uncertainty on how the building would pay for itself once opened.

LaDuca said the Town of Lewiston project would attract guests with its world-class amenities, host travel and tournament sports events, and utilize a fee for some services.

"We know what it takes to fill this building," he said. "We have done our homework."

Reiter said he could use Town of Lewiston Recreation Department and Senior Center workers to staff the complex.

The structure would run lengthwise down Daryl Johnston Drive. Its smaller front end would face Creek Road, while its same-size back end would essentially face the Elia Stadium. New parking spaces would be located on what is now grassland abutting the current parking lot.

The Lewiston-Porter school board had considered using its back 270 acres for a recreation facility. However, "We can't develop it. It's wetland," Roser said.